Innisfail mayor irked by Carritt’s run for his job

Jim Romane says there will be a ‘discussion’ with outspoken councillor
Nov 27, 2020 5:00 PM By: Johnnie Bachusky 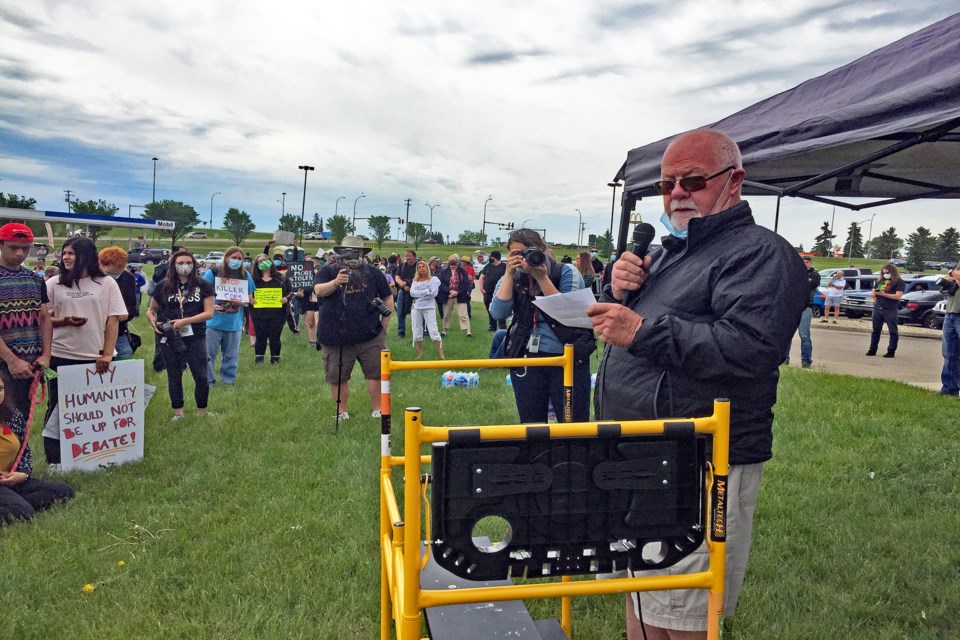 Town of Innisfail Mayor Jim Romane at this year's anti-racism rally in town. The 23-year veteran of municipal politics is unsure whether he will run in next year's election but he already has a challenge from Coun. Glen Carritt. Johnnie Bachusky/MVP Staff

INNISFAIL – Mayor Jim Romane says he has not decided yet if he will seek re-election next year.

But for at least one town councillor it doesn’t matter. Coun. Glen Carritt has decided 11 full months before the next municipal general election he is best man or woman to move the town forward in 2021 and beyond.

Earlier this month he placed on advertisement in The Albertan to thank supporters for sharing their concerns and offering suggestions and “accolades” for what the town has done over the past three years, and to let them know he’s running for mayor. He is Innisfail’s first citizen to officially declare an intention to run in the 2021 municipal election.

“Lots of people have announced that they are running for mayor,” said Carritt of the upcoming municipal election landscape across Alberta. He said his campaign will focus on fiscal responsibility, economic development, and listening to local ratepayers and user groups and businesses.

Romane, however, said he was caught off guard by Carritt’s declaration - eerily similar to what happened to the mayor in 2013 when then councillor Brian Spiller announced he was running for mayor without giving him advance notice.

“It’s not that he’s not giving me lots of time but I thought he would have given me a call and let me know what his plans were but he didn’t call me to ask if I would support him or who was going to run against him,” said Romane. "I don't know what he is assuming but one day we will have that discussion."

Carritt said there was a discussion with Romane of his mayoralty ambitions – one that happened six or seven months ago.

“He might have forgotten. Probably six or seven months ago I asked him if had planned to run for it and he hadn’t said anything,” said Carritt, who is currently in the fourth year of his first term in political office. “I think Jim is doing a good job. It’s nothing against Jim. I just plan to run because I am listening to the ratepayers and I want to offer what I can to the town at a higher capacity.”

As for Romane’s future, he said he’s undecided about whether he will run for his second consecutive term.

“I am going to have to make that decision here pretty soon,” said Romane, who is 74. “I haven’t 100 per cent decided. I was a little bit concerned about who was going to run but I’m getting up there too. I am up on age too. I will have to consider that.”

But does Romane still have the fire inside to continue on as mayor?

“I think I do but it’s not fair to my family to keep doing these things,” he said, adding he has given 23 years of his life to local politics. “I’ve got to think hard about everybody and everything but I will make a decision probably by the New Year.”