Vows council will address racism in the community
Jun 10, 2020 2:00 PM By: Johnnie Bachusky 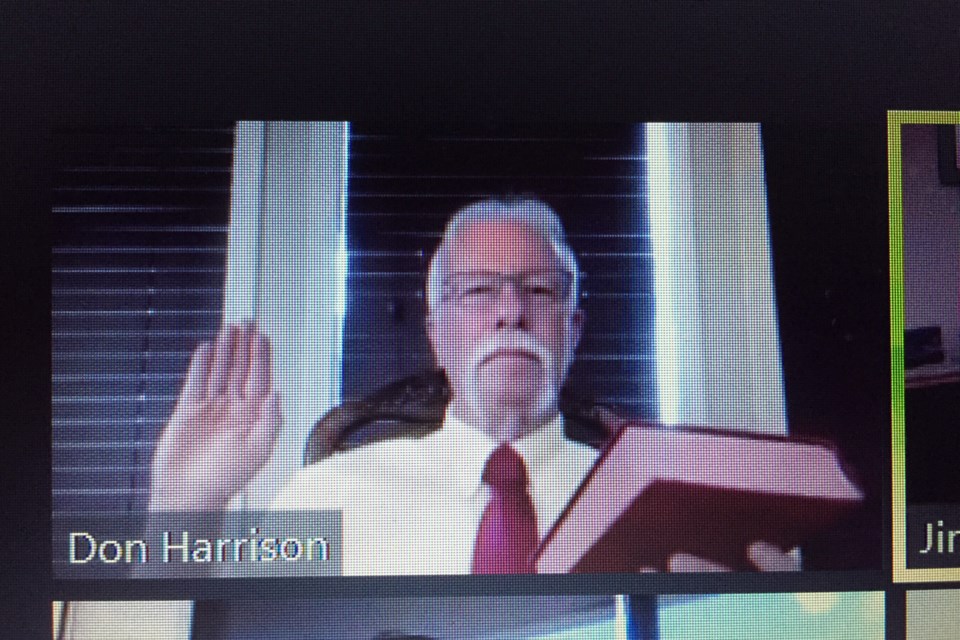 Newly elected town councillor Don Harrison was sworn in by Innisfail's mayor Jim Romane at council's regular meeting on June 9, the day after the municipal byelection. Harrison supported the town's commitment to build improved policies against racism but urged the town to do it quickly. ZOOM image

INNISFAIL – Mayor Jim Romane has publicly admitted at an open town council meeting he initially fumbled the ball on the controversial issue of racism in the community and will lead fellow council members in solidarity at this weekend’s public anti-racism rally.

At council’s regular meeting on June 9, Romane read from a prepared statement that comments he made to an out-of-town news organization were not acceptable nor reflective of the citizens he represents. Romane added that after receiving public feedback he realized he needed “to do better."

Earlier in the day, Romane and council met and unanimously agreed to support a planned anti-racism rally in town on June 13, and passed a resolution that the Town of Innisfail stands against any form of racism and will continue to combat it with policies and procedures to help overcome issues of racism and discrimination in the community.

“I fully acknowledge and accept that I have much learning to do on the topic and am committed to doing better,” said Romane to council from his letter. “I’d like to use this situation as an opportunity to educate myself on the many, many racism-related issues of which I admittedly know far too little.

"My personal ignorance, in this instance, was simply inexcusable," added Romane.

The mayor went on to say that he and town council will be “standing in solidarity” at this weekend’s planned anti-racism rally on June 13 near the NoFrills grocery store.

The rally date of June 13 was the original date scheduled by organizer Brittany Bovey. However, she then postponed it following heated online racist attacks for a larger more inclusive one to an undetermined date. But then the original date was back on following consultations with town officials, which was confirmed in regional news reports. Bovey has not returned repeated phone calls from The Albertan.

“We’ll be there to learn and to listen,” said Romane.

He added the town will be reaching out to organizers of the rally, notably Brittany Bovey, to offer support, assistance and resources to ensure the safety of all citizens who are participating.

“As council, we recognize that words are futile in the absence of action, and today, we committed by resolution to explore and initiate the actions necessary to better understand and address the racism that exists right here in our community,” said Romane, conceding that the town does not yet know what those “actions” will look like. “Rest assured that they remain council’s utmost priority moving forward.”

Romane’s comments were saluted by all members of council but Coun. Glen Carritt outlined one objection.

“I will stand in solidarity with peaceful movements and against racism but I won’t stand personally for the Black Lives Matter movement,” Carritt told council.

Newly elected councillor, Don Harrison, who was officially sworn in after winning the local byelection the previous evening, said he took a number of calls earlier in the day from community citizens who have experienced racism and discrimination. He urged council that while it has made a commitment in the community to address racism it must do so quickly.

“We have passed a very important resolution this evening to move forward but without the followup, the second step, it means nothing,” said Harrison.

“I urge council to move quickly on the action plan. Communicate that out to our residents. I know there is a number of them tonight on Zoom watching and I certainly hope they are encouraged by the resolution,” he added.

“I certainly hope our community understands now that we aren’t a racist community, that we are welcoming and all inclusive.”

Innisfail council endorses anti-racism rally following emergency meeting
Jun 9, 2020 5:10 PM
Comments
We welcome your feedback and encourage you to share your thoughts. We ask that you be respectful of others and their points of view, refrain from personal attacks and stay on topic. To learn about our commenting policies and how we moderate, please read our Community Guidelines.