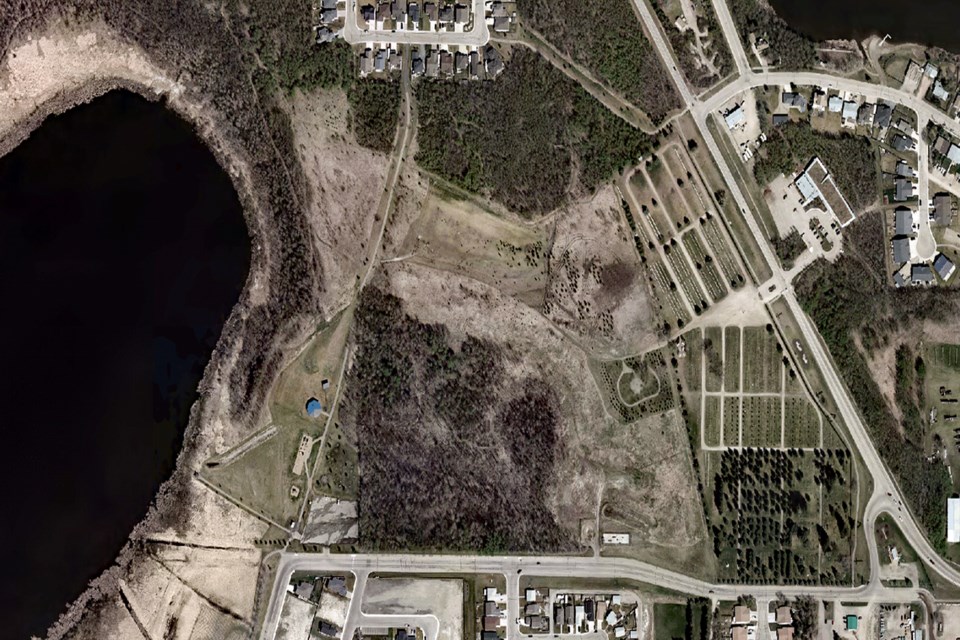 Innisfail Kinsmen Club members say there is enough room at Centennial Park to build an 18-hole disc golf course from around the dog park, centre-left, and up to the edge of the Innisfail Cemetery, centre-right. Submitted photo

INNISFAIL – Never mind the classic golf calls of fore, or ones of joy for scoring an eagle or birdie.

Those come from the disc golfing world, and they could become quite well known around town by late spring.

Following a 25-minute presentation, council approved the initiative in principle and directed administration to work with the Innisfail Kinsmen Club on the project. Council wants a detailed design for review at a future meeting.

Tim Ainscough, president of the local Kinsmen club, told council the club wants to install an 18-hole disc golf course up at Centennial Park, starting with a nine-hole facility, and have it operational by late spring. If all goes well, another nine holes could be ready by the fall.

“This is just like a playground. It’s free to use. It’s exercise. It’s COVID-friendly because you are spread out. There are lots of pluses,” said Rob Gette, the chair of the service club’s disc golf committee.

Disc golf has been popular in North America for almost a half century. It was actually invented by Canadians when the first game was played in Bladworth, Sask. in 1927. The game was then called Tin Lid Golf.

As of 2019, disc golf is played in about 40 countries with more than 53,000 active members. There is even a pro tour. In the Central Alberta region, there are three courses in the City of Red Deer, one in Sylvan Lake, Aspen Meadows Disc Golf Course west of Sundre, and Olds’ Hartman Green Disc Golf Course.

Ainscough said the service club’s intent is to build the course and then turn it over to the municipality, with no charge to the community to use. Funding would come from corporate sponsorship – at $2,000 per hole. All that is being asked from the town is to maintain the grass a couple times a season.

“We think it is something that will work in Innisfail, and something the kids can do for free,” he said.

With disc golf, the length of holes is anywhere between 50 to 500 feet long. Council was told there is plenty of room to create 18 holes at Centennial Park in the area around the dog park and up towards the edge of the cemetery. The course would be designed to meander through trees and around obstacles. Council was told the only infrastructure needed for installation were baskets and tee boxes.

As for sponsors, said Ainscough, they would each get their name on a tee box, as well as on parking lot signage. He said the service club has already received sponsorship commitments for five holes.

All council members were warm to the entire concept. However, Coun. Jean Barclay, who told council she uses the dog park almost daily, wanted to know what kind of disruption there would be for trail users.

“That concerns me, and even as councillor (Donnie) Hill noted, how much vegetation is going to be disrupted? We have one nice park in Innisfail and we don’t have a lot of places for people to go, to walk, cross country ski and everything else,” said Barclay, adding noise levels should be looked at as the preliminary plan shows the course may encroach upon properties in the Upland Aspen subdivision.

“I am all in favour of it as long as we are not taking away from recreation that is there for other people as well.”

Ainscough said it was the intent of the Kinsmen not to have an impact on existing trail users, noting that while there are many tobogganers in that lower part during winter there is not as many in summer as sizable portions are undeveloped.

“It’s not well used right now but our intent is to work with parks and recreation to set it up so we are not going to have an impact,” he said.

Ainscough said the service club’s next step is to complete a detailed design and work with town staff on potential impacts. He said the intent is to bring to council a layout for all 18 holes that will show where and how the first nine holes will look like. When the detailed plan is completed, they will come back to administration and decide whether public engagement is necessary.

“I think that is a great idea because not only will we get comments but it will help promote what we are trying to do, and hopefully help us sell those last four holes,” said Ainscough. “Once we get an approval from council to proceed, we would look to go to construction.”