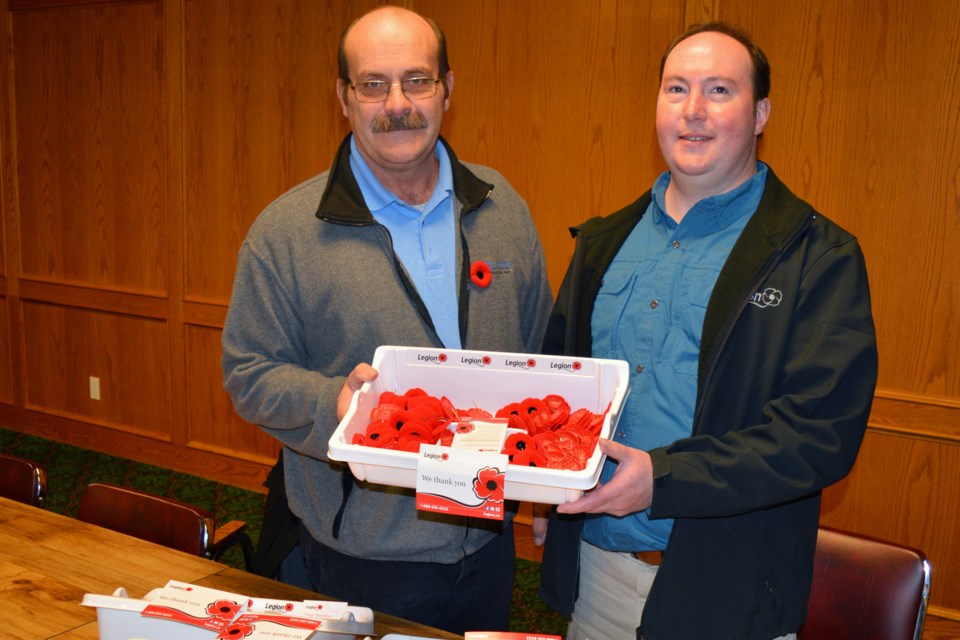 INNISFAIL – Members of the Innisfail Royal Canadian Legion will join fellow Canadians this Remembrance Day to honour the sacrifice made by thousands of Canadian soldiers during the first and second world wars.

“This year we celebrated the 75th anniversary of D-Day (on June 6), the Battle of Normandy when they invaded in France,” said Lester Nickel, poppy campaign chair at the legion. “That is what we have used as our theme this year. Last year we used the 100-year (anniversary) of the Armistice.”

Nickel said members of the executive and volunteers with the legion membership helped distribute poppies around Innisfail, Spruce View, Penhold and Springbrook as part of the local poppy campaign this year.

“In Innisfail there’s about 100 (poppy) boxes out around town," he said, noting people can find donation boxes in local businesses, public buildings, libraries, stores and the legion.

“We’re also in the process of doing wreath sales for anybody who wants to purchase wreaths for fallen family members to lay at the cenotaph,” said Nickel.

All funds raised through the poppy campaign will go directly to support local veterans, he added.

“The money stays here in the legion and is held in trust in the poppy fund. Then we will disperse it and use it to assist veterans that come and ask for assistance,” explained Nickel, noting the money is used in several areas and programs. “Via the legion, we have service officers who will assist veterans to go through (federal) Veterans Affairs to get all the assistance that they need.”

Last year the Innisfail legion raised just under $20,000 with its local poppy campaign.

“I think it’s a big deal for this community,” said Pickard. “There are a lot of people (from the area) who served in the Armed Forces in the past and those that are currently serving."

The Innisfail Royal Canadian Legion will hold its Remembrance Day Service on Nov. 11 starting at 10 a.m.

Young add their own stuff to the roaring game
Feb 16, 2020 2:25 PM
Comments
We welcome your feedback and encourage you to share your thoughts on this story. We ask that you be respectful of others and their points of view, refrain from personal attacks and stay on topic. To learn about our commenting policies and how we moderate, please read our Community Guidelines.