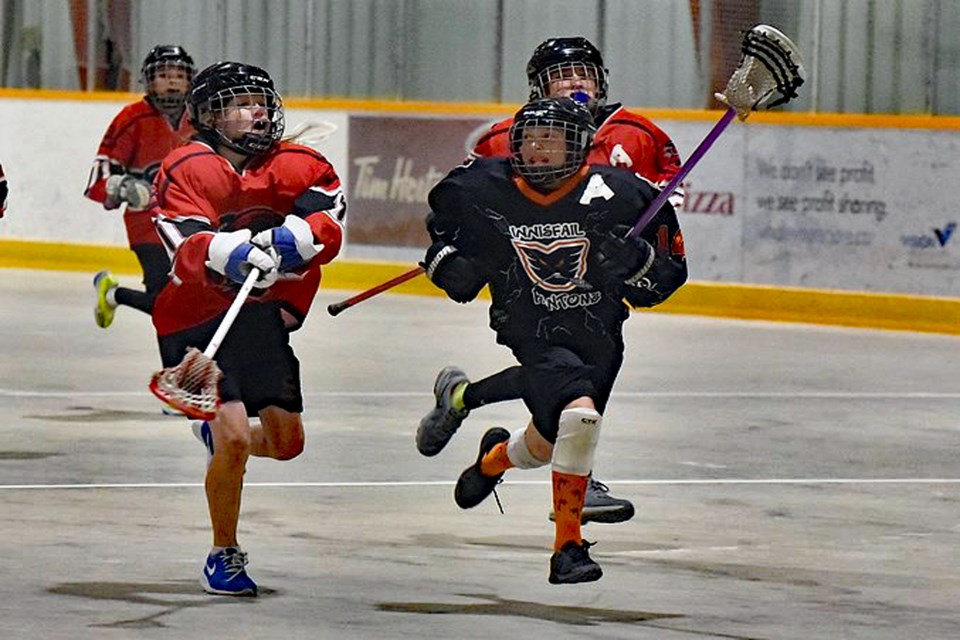 Senior officials with the Innisfail Minor Lacrosse Association have made a passionate pitch to town council for a better deal of arena usage for pre-season training in March. File Photo/MVP Staff

INNISFAIL – The town has begun work to find a long-term solution for beleaguered lacrosse players desperately needing earlier access to the arena for pre-season training without being in conflict with local minor hockey and the annual Tournament of Champions.

The longstanding problem for the Innisfail Minor Lacrosse Association (IMLA) was laid out publicly during a passionate presentation by senior officials to town council at its regular meeting on Jan. 25.

At the end of the presentation, administration was directed to work with IMLA and the Innisfail Minor Hockey Association (IMHA) to find a workable solution.

“This year is not probably the best example because of COVID, and if hockey is even ever allowed to go back before their season would be done, but we should make a game plan for future years,” said Meghan Jenkins, the town’s director of community services.

Council was told by senior IMLA officials that with the lacrosse pre-season beginning in March, the more than 100 young association players between the ages of four and 16 can not practise on a proper hard surface because both arena ice surfaces have been earmarked for IMHA playoffs and the Tournament of Champions.

However, council was also told that while minor hockey is still played throughout March on the arena’s blue rink, the red rink is not being used for at least four weeks until the end-of-the-month Tournament of Champions, an event with mostly out-of-town teams that still generates significant revenue for the town.

When the tournament is completed, the town removes the ice, a process taking about two weeks. Lacrosse’s regular season can begin by mid-April but proper pre-season training is lost.

Dara Gooder, president of the IMLA, told council the current situation leaves young players at a “great disadvantage” at competitions as they are left without proper coaching instruction, with pre-season training consisting largely of being confined to an inadequate undersized gym floor at the Innisfail Schools Campus.

"We are the only association within our league that does not have the ability to practise on the area surface and with the proper equipment before the season starts,” Gooder told council.

Jon Weddell, the IMLA’s director of player/coach development, was blunt about the dire pre-season training conditions young players must endure.

“The acoustics in the gym are overwhelming for a sport like lacrosse where there is so much action, and the sound of the shoes and parents talking and the balls hitting. We’ve had two different children and two different times who have emotionally cratered in that gym.”

Gooder proposed a plan that would see the town change its policy from hockey being held on both surfaces until the end of March, to one that would allow the IMLA to hold practices in the red arena in the second week of that month.

Weddell added that Tournament of Champions could still take the blue arena.

“There would still be half the revenue from that tournament in theory, as well as the fact that in March everybody is desperate for floor time for lacrosse,” he said.

Weddell said the town could make up lost Tournament of Champions revenue through weekly IMLA bookings for Mondays, Tuesdays, Wednesdays and Thursdays, while Fridays would be open for Sylvan Lake and Olds lacrosse teams, and the weekends available for whatever was needed.

Gooder added the IMLA could commit to at least a minimum of 30 hours a week.

As well, said Weddell, the IMLA has the full support of the IMHA that it would do whatever it could to accommodate the needs of young local lacrosse players.

“If we don’t need both ice surfaces and we can let them know when we are done with one ice surface and make things happen on the other one, then absolutely we could give notice for them to take (ice) out and lacrosse can get their season arranged,” said Bruce Rafuse, president of the IMHA.

“If we can help expediate that process in terms of minor hockey then absolutely we will do what we can.”