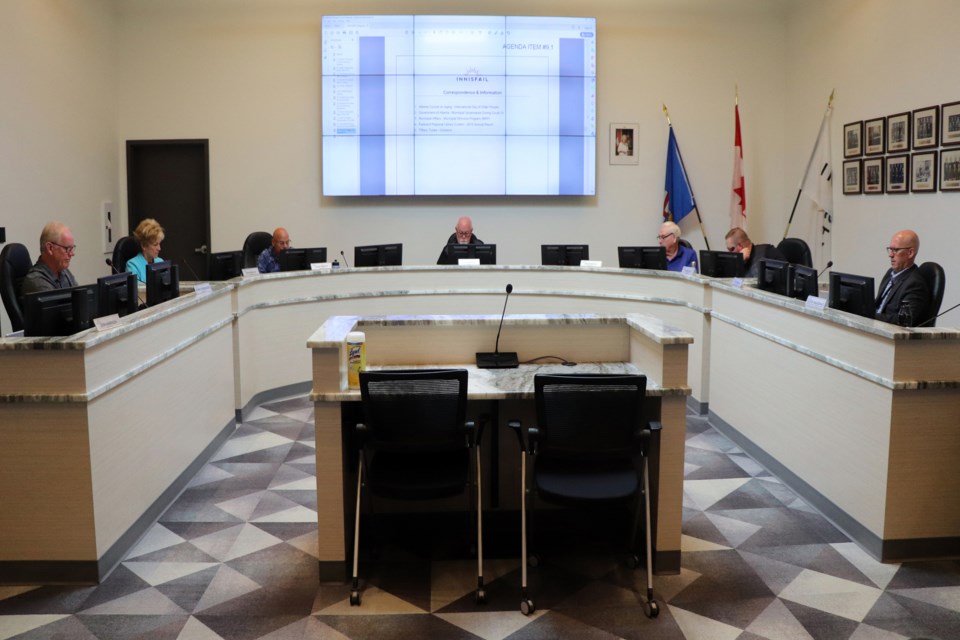 Innisfail council was presented with the Innisfail Arena reopening plan on Aug. 10. Mayor Jim Romane said he is expecting public opposition to the plan, which staff insist is only a starting point and could change significantly before the Arena is ready for users on Sept. 14. Johnnie Bachusky/MVP Staff

INNISFAIL – The town is rolling out its arena reopening plan, one that will not allow spectators – not even parents - and keep dressing rooms closed.

But town officials, including mayor Jim Romane, insist the plan is just a starting point that could change dramatically by the time the facility is ready for users midway in September.

“It’s a starting point to get the doors open to the satisfaction of Alberta Health Services. There’s going to be a lot of opposition to it, no doubt,” said Romane.

“A lot of people can’t see why with it being a big enough facility you couldn’t have social distancing safely to allow one parent per child to go in and watch. I am getting feedback in that direction from the public.”

“Personally, I think we have been following AHS guidelines all along,” said Coun. Glen Carritt during the meeting. “Let’s get the arena open to the maximum that we can do it and let’s get moving forward, in my opinion.”

Carritt wondered why the town was going “above and beyond” Alberta Health Services guidelines.

“If other towns are allowing spectators and use of dressing rooms why is Innisfail not doing the same?" asked Carritt.

Despite Carritt’s concerns, council followed Cerin’s approach and recommendations and her report was endorsed by a 6-1 vote, with Carritt voting against.

During Cerin’s presentation council was told the plan was to have only the arena’s blue ice surface ready for users on Sept. 14.

“We do have quite a bit of time here between now and then…but things are changing and they are changing fast,” said Cerin, noting she visited five other municipalities and contacted another to find out what their plans were and to see if the town was in “close proximity” to what they were doing.

“Four of six are opening with the same plan that we are. No dressing room usage and no spectators,” she said, later telling council that parents are considered spectators and they will not be allowed to stay once they drop off their children.

“The parent is allowed to come in, tie the skates and then they would have to leave the facility.”

Cerin emphasized to council the plan in front of them was just preliminary, and some details were still being considered, such as how much cleaning time staff will need between usages and how many people will be using the facility.

“That all plays into the equation of cleaning time of what is that cleaning going to look like? It’s any contact area any patron would touch, bathrooms between groups, all the chairs and players benches and gates,” she said. “It is quite a bit when you look at it, and we have to figure out what time that is going to take before we are advancing the plan.”

Council was told a plan was created for the lobby to accommodate 25 users, which she added, pleased local figure skating and minor hockey officials.

“If Hockey Alberta allows them to proceed they will have enough room to do some sort of tryout with each age group,” she said, adding chairs in the lobby will be spaced six feet apart. “The expectation is that they come ready to play, except for skates.”

Todd Becker, the town’s chief administrative officer, told council he supported Cerin’s decisions, as well as her advice to council and himself.

“We could be in it for a week and it could be modified. We did this with the pool and made adjustments as we go as long as we had council’s support ultimately,” said Becker. “We have an obligation to the users as well as our staff. I think it is a good start. It could change very quickly based on people’s willingness to do what is asked of them.”