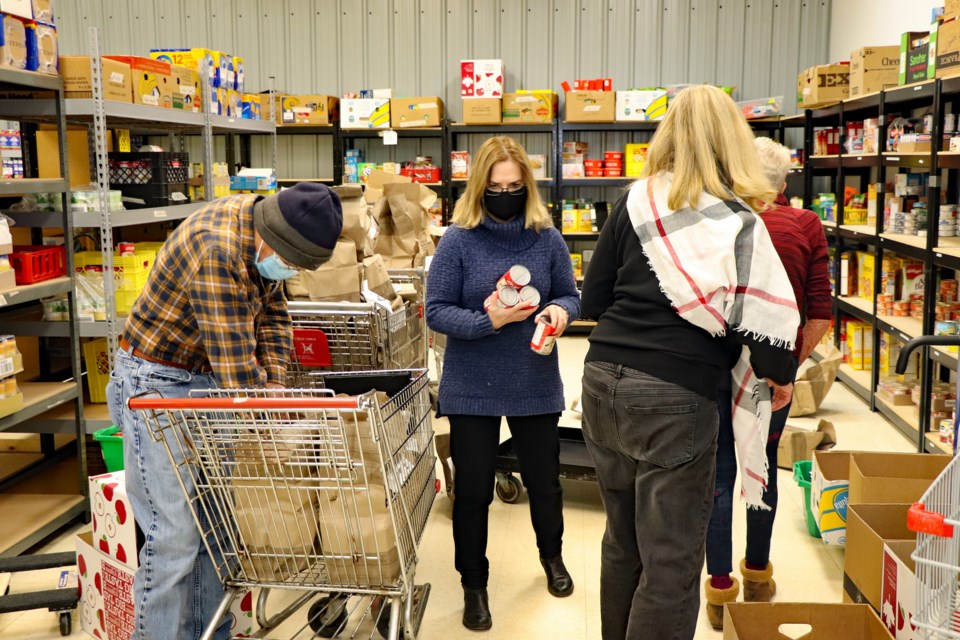 Volunteers at the Innisfail and District Food Bank stock the agency's shelves before Christmas. Food bank officials say the public's generosity this past holiday season has been "overwhelming." Johnnie Bachusky/MVP Staff

INNISFAIL – The local Christmas Bureau and Innisfail and District Food Bank are both reporting overwhelming community support this past holiday season through one of the town’s most challenging years in its long history.

Despite the bad economy and the devastating COVID-19 pandemic, Innisfailians came through with unprecedented generosity, said officials with both agencies.

“We almost have more food than we can handle,” said Judy Cooper, co-coordinator of the food bank. “People have been very good with financial giving, and we have had lots of (donation) bags from the Co-op. We literally have those in abundance.

“I went in after Christmas, and the guy who picks them and brings them over had the whole floor on the righthand side that was covered with bags,” she said. “People have been very generous. It has been heartwarming.”

Norma Hoppins, donations chairperson for the local Christmas Bureau, noted the number of recipients were slightly higher this year and donations remained as high as any other year, despite the cancellation of the annual RCMP Charity Check Stop.

“That was really interesting because we thought people would be pretty hard pressed,” she said, adding many concerned locals called the bureau asking where they could bring their donations."Clubs and organizations were generous, even though many were not able to have their usual fundraising events this year."
“We were (initially) worried, we made a plan and carried it through. We were absolutely relieved that one, it turned out so well, and two, that it was over,” said Hoppins with a chuckle.

As for cash donations to the food bank, Cooper said that while exact figures were not immediately available last week, she said the agency’s treasurer noted the food bank received “abundantly more” than in previous years.

Cooper also noted the shelves at the food bank have plenty of stock to serve the needs of citizens for at least the first few months of 2021.

“At the moment we have lots, and an abundance of supplies,” she said. “We’ve done very well.”

And there is even still plenty of turkey left over. Before Christmas the food bank received 30 from the Evans Law Office, and another dozen from Johns Manville.

“We still have a lot left and we will be giving turkey out in January,” she said.

In the meantime, both agencies gave huge thanks to the many businesses in town and volunteers who came through to help the town’s vulnerable through the current difficult time.

“Gratitude is due to the entire community of Innisfail and District for making Christmas Bureau 2020 a success,” said Hoppins.