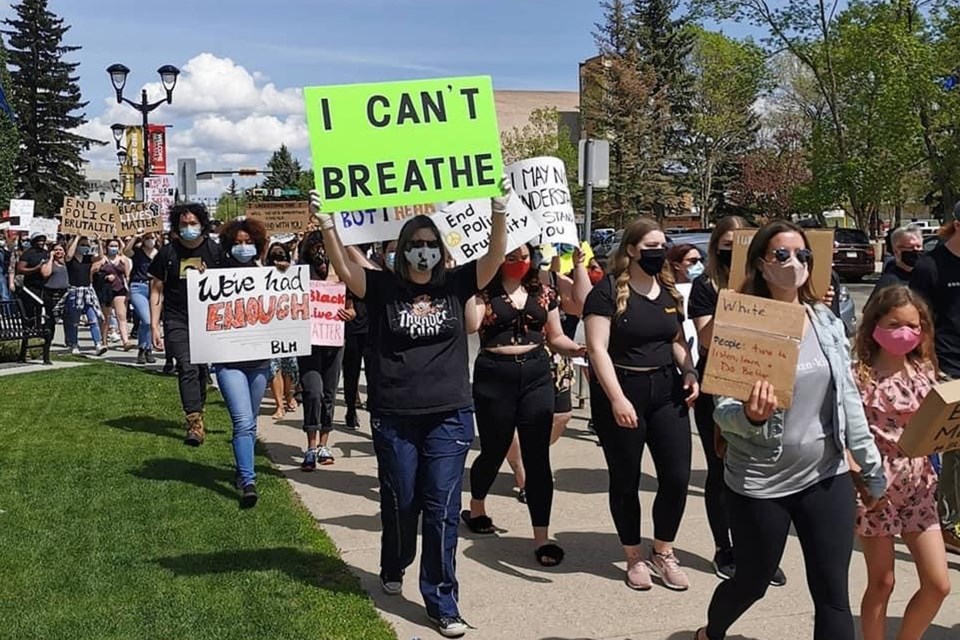 An anti-racism rally earlier this month on June 5 in the City of Red Deer. Photo courtesy of Jorge Hernandez.

INNISFAIL – Deanna Chambers is driving up from Drumheller tomorrow with her children and mother to stand tall at the town’s anti-racism rally.

It is an event that has made national headlines all week but Chambers, a 43-year-old proud Metis woman, feels the time is right to bring a loud, albeit peaceful, message of solidarity from the marginalized and vulnerable to the heartland of conservative Alberta.

“Not all conservatives are racist. I would never say that, but there has been a culture that has been accepted for a very long time in the heartland of Alberta,” said Chambers, an indigenous community development officer for Drumheller Institution. “I think it is very important that they see we are here and that we are standing up for what is right.”

Chambers is one of possibly hundreds who will come to the Innisfail rally on Saturday, June 13 that begins at noon and runs until 2 p.m. on the green space beside the NoFrills store on the east side of town.

The rally has been at the top of the news cycle in Canada all this week, largely due to its location and the town’s reputation. While anti-racism rallies in big cities like Calgary, Edmonton and even Red Deer may not have drawn out many detractors, having one in a traditionally conservative stronghold such as Innisfail has brought out uglier elements of the far right.

Brittany Bovey, a 23-year-old Innisfailian and recent political science graduate from the University of Lethbridge, found out the hard way in the early stages of trying to organize a June 13 rally almost totally by herself. She had to endure vile far right online protests and decided it was best to at least postpone it and move away from a Black Lives Matter theme to a more inclusive one that would reach out to all maligned minorities.

And then in a stunning development — the Town of Innisfail, with support from local RCMP, agreed to not only support her rally but made a promise it would begin a community discussion on how the town can become more inclusive, understanding and accepting towards minorities. At the same time, Mayor Jim Romane apologized to the community for his lack of awareness on the racism issue and promised to “do better.”

As for the blunting of any loud and ill-intended far right groups who might attend, local RCMP have categorically said they will be ready to shut down any agitation.

High level political support for the cause also came on the same day this past week from conservative sources – Premier Jason Kenny and Red Deer – Mountain View MP Earl Dreeshen.

“I commend people for speaking out against racism in this current context,” Kenney told reporters. “If they deny it exists in Alberta, they’re just wrong — they need to listen to the experiences of Black Albertans and people of other minority backgrounds. They need to honour their voices and lived experiences, to reach out and do better.

“Racism is always everywhere, it’s a sickness of the soul and must be condemned at every turn,” he said.

And Dreeshen said in a statement this week that it was an “unfortunate reality” for many people in Canada who do experience discrimination or racism in various forms.

“The recent events have made people across the country want to take part in a national discussion on racism,” said Dreeshen in a statement that was published this week in an online newsletter by the Innisfail & District Chamber of Commerce. “I am a big believer in free speech and the right to protest peacefully. That is true in communities both large and small.”

As for the momentous task of putting the rally together, out of town anti-racism advocates rallied to help the determined but shy and beleaguered Innisfailian.

“Initially it was obvious the event had no organization or structure. I didn’t have the proper resources,” said Bovey in an interview with The Albertan earlier this week.

The main help came from Jenny Lowe, a Calgary anti-racist activist and organizer, who has taken a lead role in organizing the event.

“She is using her experience. This is her job. She sees a need, her and her organization, and they address it,” said Bovey, adding Love even came to Innisfail for a meeting with local officials. “Jenny has been wonderful. She has shown her love and passion for the movement.”

Bovey said she has taken on social media and communication responsibilities for the rally. Phone calls to Lowe for comment were not immediately returned.

Nevertheless, the rally is still the Innisfailian’s brainchild. For a good part of last week Bovey was not talking to the media, perhaps a bit overwhelmed by the fast charging forces that have taken her from obscurity to national attention, a young woman who, without any preconceived intention, has forced positive change.

“To be honest, I have not had time to process the scope of things. Just this morning I was talking to a woman from Toronto who was sending donated face masks to us very quickly from the East,” she said, noting the ongoing threat of COVID-19 is still very much on the minds of organizers. “I understood this was big when it was on a provincial level but I don’t think I understood how big an impact this can have on a national scale.

“My goal was always to just start a conversation. My voice was the loudest one in the room at the moment in terms of raising awareness but now that is not the point of the event. I really want my voice to now take a back seat,” said Bovey. “We have momentum and now our focus is to really uplift and encourage citizens of colour to speak out and stand up and hopefully this is a welcoming and comfortable platform for them to raise their concerns.”

Included in the many voices who want to be present and heard Saturday in Innisfail are Deanna Chambers, her children and her mother.

“I think it is really important at this time in the world we live in that we lend our hand to each other because for black people, Indigenous people, and people of colour that are marginalized for the colour of their skin, we need to support each other so change can happen,” said Chambers. “A lot of people think that Canada, because we are such a polite country, that we are very liberal and we have a lot of social programs, it doesn’t happen. It happens all the time.