Birds will play in AA but declare AAA status to compete for Allan Cup
Jul 28, 2020 9:00 AM By: Johnnie Bachusky 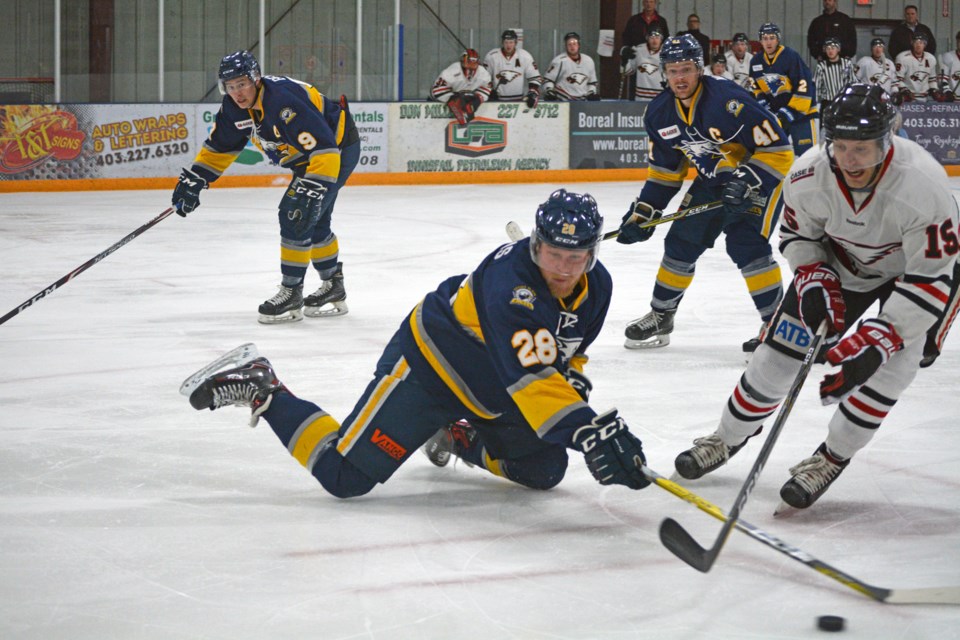 The Innisfail Eagles will be playing in a new league for the 2020-2021 regular season. The senior AAA men's team is joining the AA Ranchlands Senior Hockey League. The Eagles are still keeping their AAA status to qualify for the Allan Cup. File photo/MVP Staff

INNISFAIL - The town’s senior AAA men's hockey birds have found a new league to play in as they continue their quest for another trip to the Allan Cup.

Last weekend, the Innisfail Eagles hockey club announced on social media they will be playing in a full 2020-2021 season in the senior mens AA Ranchlands Senior Hockey League (RSHL). Regular season action is expected to begin in October.

The announcement also said the team has declared AAA status for the upcoming season, which would qualify them to compete in the Allan Cup.

The Eagles played in the two-team Chinook Hockey League last season and were winning the playoff finals last March before action was cancelled due to the COVID-19 crisis. The RSHL finals were also cancelled because of the pandemic.

“This will bring many new faces to the Innisfail arena and give our club a look at many new players,” said the Eagles hockey team in its social media release. “The Innisfail Eagles are thankful to the teams for allowing us the opportunity to play in league and help us stay competitive in the hopes of achieving our end goal and that is hoisting an Allan Cup.”

The news of the Innisfail Eagles joining a new league was also announced on the RSHL website.

“We have a meeting (July 28) to discuss this,” said Brian Spiller, the president of the Innisfail Eagles. He did say on July 27 that Ryan Dodd, the team’s general manager, and Brian Sutter, the Eagles head coach, entered the team in the RSHL.