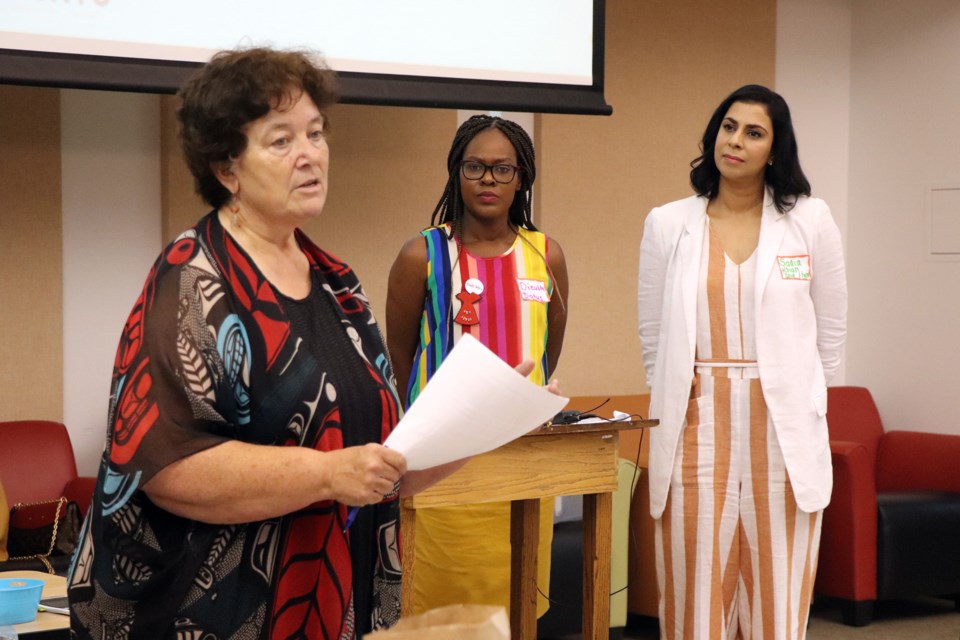 INNISFAIL – For two evenings last month local town councilors went to training sessions few if any elected members ever dared to even consider attending over the community’s 117-year history.

They attended anti-racism training sessions on Aug. 17 and 31 that were approved by town council in late July. At the same time, council endorsed the anti-racism vision of the rejuvenated Welcoming & Inclusive Community Committee.

Both sessions featured Dieulita Datus and Sadia Khan, both women of colour who created UBUNTU, a Central Alberta anti-racism advocacy organization. The group’s mandate is to mobilize area communities towards full social justice through engagement and community building.

It was not lost on the two women that the Innisfail training sessions were historic events, unimaginable to even consider even a year ago in Alberta’s conservative heartland.

And yet there they were on both nights, the same town councillors who passed the community’s first ever anti-racism bylaw the previous month, to learn and become more aware of what racism is and the dangerous impacts it could have on their town, or any in Alberta.

“I can’t help but think we are on the right track,” said mayor Jim Romane who attended the first session on Aug. 17. Romane has been key to Innisfail’s aggressive momentum on the issue since the days leading up to the highly publicized anti-racism rally last June when he publicly apologized for what he considered his “personal ignorance” on the issue in comments to out-of-town media.

“I have learned a lot. You just don’t realize the impact society has on these individuals unless you know or are connected to them,” said Romane. “It opens your eyes on how people can be pretty inconsiderate at times when it comes to somebody being a little different. It’s been a good experience and I think it will bring awareness to the table in the community.”

Datus, 37, has been a resident of Lacombe since 2007 after living in the Bahamas. She was born in Haiti, and grew up there but was forced to leave with her family in the 1990s due to the country’s political unrest.

Her UBUNTU project with Khan was officially launched last June. Their goal is to help build capacity for organizations and communities to create just, equitable and inclusive environments through workshops, projects and community building. The focus is on anti-racism, anti-oppression and human rights.

With Innisfail in the national spotlight last June with its anti-racism rally -- an event that threatened to discolour the town’s long-standing friendly and inclusive image -- the timing of the sessions was just right.

“We came out very optimistic from the sessions we have done for them and very hopeful as well,” said Datus. “They appeared to very engaging and really want to change. And even though one of the focuses was anti-racism we also took a look at LGBTQ, and we dived into pronouns and gender equality and all that stuff so they are really making a great effort to be more engaging with their community.

However, Khan cautioned that while the sessions were encouraging they are “not a magic pill” that instantly creates the necessary change for councillors, citizens or for the community at large.

“It’s the work and actions that you have to take every day within your policies to make this happen, so you continually have to keep doing this work,” said Khan, noting the work to combat racism has been put to society for many years. “It is not going to take two sessions to dismantle, and have these conversations. We have to go in small steps.”

Pat Bidart and Jason Heistad are the co-chairs of the Welcoming committee. They are also hopeful that after two training sessions Innisfail and its elected officials are firmly on the path to take a meaningful journey that could be the envy of the province or even the country, and away from unsettling outside commentary that the town is a haven for racist attitudes.

“It went really well. It’s a first step,” said Bidart, whose committee is hosting a third training session on Sept. 14 with a theme of How to be an Ally. “(Council) had enthusiasm and willingness to listen at the change. That’s all you can ask for. For me it starts with the willingness to change, the ability to listen and enthusiasm. They have all three ingredients. Yes, I think they want to make a difference.”

She noted there is much work ahead, including webinars with other agencies, and further presentations to locals groups such as the Innisfail & District Chamber of Commerce, as well as approaching local sports organizations and working with both school boards in the community.

“I think having these education sessions, getting people to think about it and slowly moving to a situation where, ‘sorry we don’t put up with this’. If you’re someone that is setting off racist comments it’s just not acceptable, we don’t put up with that anymore,” said Bidart. “To me it is a quiet change. People have to understand why this is wrong.

“For me it is a quiet movement,” she added. “The rally was a kickstart but just having a rally for a rally’s sake and you’re not making any change is not where I want to be.”

The Albertan and MountainViewToday.ca will feature five voices telling their stories and triumphs over racism.