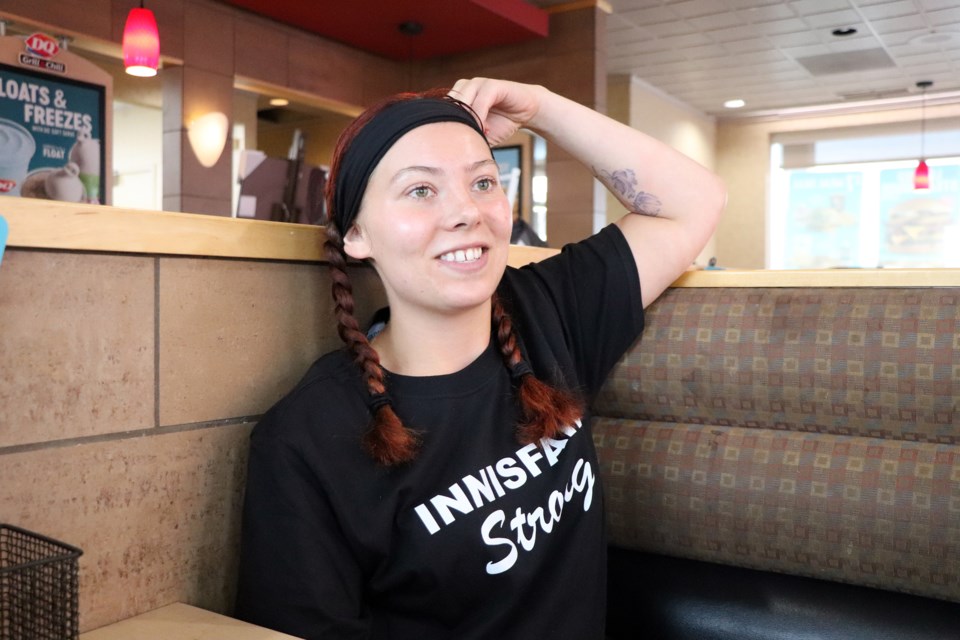 Innisfailian Brittany Bovey is expanding her planned anti-racism rally for Innisfail to include support for all minority groups who are impacted by racism. Johnnie Bachusky/MVP Staff

INNISFAIL – Following a heated online backlash, Brittany Bovey is more determined than ever to organize an expanded rally in town for citizens to add their voices against racism towards all minorities, including African Canadians, indigenous peoples and any person of colour.

Last weekend, Bovey, a 23-year-old lifelong Innisfailian and recent political science graduate from the University of Lethbridge, created a new Facebook page, Central Alberta Against Racism. She is also reaching out for more support to organize a larger more inclusive local rally. The original Black Lives Matter-themed rally on June 13 by the NoFrills grocery store has been officially postponed. Bovey has not yet selected a date for the new expanded rally.

“I realized this movement can be even bigger, and not just Innisfail,” said Bovey, adding all supporters against racism towards all minorities will be invited, including those in Calgary, Red Deer and Lethbridge. “Because racism runs so deep here, I think we might as well put a big call-out to all of Alberta essentially.

“The postponement will give more time to allow support to gather and for the proper reinforcement to be put in place for proper social distancing,” she added, conceding her original June 13 event was “definitely underprepared."

“The protest will be well organized, and at the time of the event the voice and the movement can be heard rather than get lost in all the details,” said Bovey. "I would just rather have one big massive event. I am now ready to get town officials involved, law enforcement, volunteers and anything else to make this movement even bigger."

Bovey added she was “shocked” at the online opposition to her original June 13 rally. On Sunday, a heated online discussion between supporters of the rally and its opponents was deleted from the Meanwhile in Innisfail, AB Facebook page. Bovey said she’s more determined than ever to push ahead and make the new event a complete success, despite any local opposition, online or otherwise.

“I was shocked at that pocket of people that spoke out (but) also hearing other people coming forward to support the movement and sharing their stories of racism,” she said. “We need to be aware that we are not immune to racism just because we are in Canada. I don’t know why some people think we are much different from the States.”

Bovey is already receiving support from within and outside of town. Coun. Jean Barclay said she commends Bovey’s efforts for initiating an important “conversation with the community, albeit potentially uncomfortable for many.

“I like the idea of broadening the scope of it. Racism crossed a lot of lines and as we know there are certain issues in the media now that are front and centre,” said Barclay, adding there are issues that Bovey has to work out for an expanded event, like COVID restrictions. “We are seeing rallies happening all across Alberta, Canada and of course the United States, and I think it is great we are getting this conversation started because we need to hear from people who are facing issues like this.”

Stephen Merredew, a Red Deer social activist who supported a trio of anti-racism rallies last week in the city, said he would “absolutely” be willing to help Bovey with her planned expanded Innisfail rally.

“I am always willing to connect with people who are seeking out justice. Anything I can do, I would be happy to help do that for her,” said Merredew, who added the three Red Deer rallies grew peacefully in support of its mission as the week went on. “From attending the three rallies myself the response from the public driving was virtually 100 per cent positive. I saw very little in the way of negative provocation or negative reactions from people who happened to be driving by.”

However, he did admit the online commentary was not as positive, but he added that everyone is entitled to their own opinion.

“On an issue like this I am firmly aware where the right side of history is pointing us, and that is against racism,” said Merredew.