INNISFAIL – It’s a fall fundraiser that’s become a tradition for local residents. The Innisfail Hospital Auxiliary’s annual beef on a bun event takes place at the Royal Canadian Legion from 11 a.m. to 1:30 p.m. on Nov. 1.
0
Oct 30, 2019 9:32 AM By: Kristine Jean 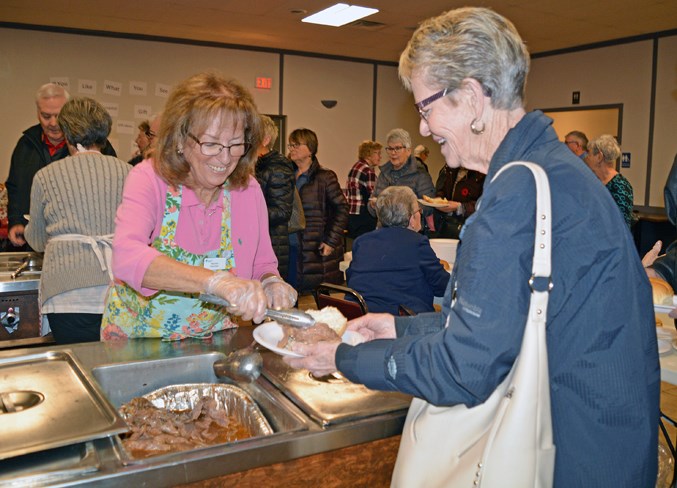 The Innisfail Hospital Auxiliary is holding their annual beef on a bun fundraiser at the Innisfail Royal Canadian Legion from 11 a.m. to 1:30 p.m. on Nov. 1.

The Innisfail Hospital Auxiliary’s annual beef on a bun event takes place at the Royal Canadian Legion from 11 a.m. to 1:30 p.m. on Nov. 1.

“The beef on a bun is our second biggest fundraiser that we do yearly,” said Rose Winters, president of the auxiliary. “Our major money is made in the gift shop at the hospital. All the money from there goes to our auxiliary and it’s run by all volunteers too.”

In addition to a tasty meal, there will be a bake sale, book sale by donation, a quilt raffle and a display from the gift shop, noted Winters.

There will also be a couple of door prizes for patrons.

“With Christmas on the horizon, they’ll have a lot of neat stuff there and (gift ideas),” she said, noting all funds raised from the event go back into the hospital auxiliary.

“We have good sponsors for (the event) too,” said Winters, noting the legion donates the hall for the fundraiser and they are given gift cards from John’s No Frills and Central Alberta Co-op.

“This year the meat is being sponsored by the Rotary Club of Innisfail. That’s a big portion of our expenses for the beef on a bun,” she added.

“We average about 300 people every year (for the fundraiser).”

Winters said every fall they receive a list of needed items for patients at the local hospital.

“We do get a list from the hospital suggesting things that they need,” said Winters, noting this year they are looking at purchasing a cart with toiletries and necessities for patients.

“(The hospital is) looking at a special cart with bags filled with needed items, particularly for people that come in suddenly and they don’t have their toothbrush and other stuff with them,” explained Winters. “It would be for patients and possibly for a family member that has to bring them in and has to stay with them.

“It’s for patients' comfort and care,” she added. ”It’s not so much buying big machines but it’s to make the patients comfortable. That’s why we’ve put in TVs, patient lifts and things like that.”

Winters noted the success of fundraisers like the beef on a bun event and their contribution to the hospital auxiliary.

“We probably run close to $25,000 a year in fundraising, including the gift shop,” said Winters. “It is a good fundraiser and the people of Innisfail really support it.”

For more information or to join the Innisfail Hospital Auxiliary contact Rose Winters at 403-227-6903.