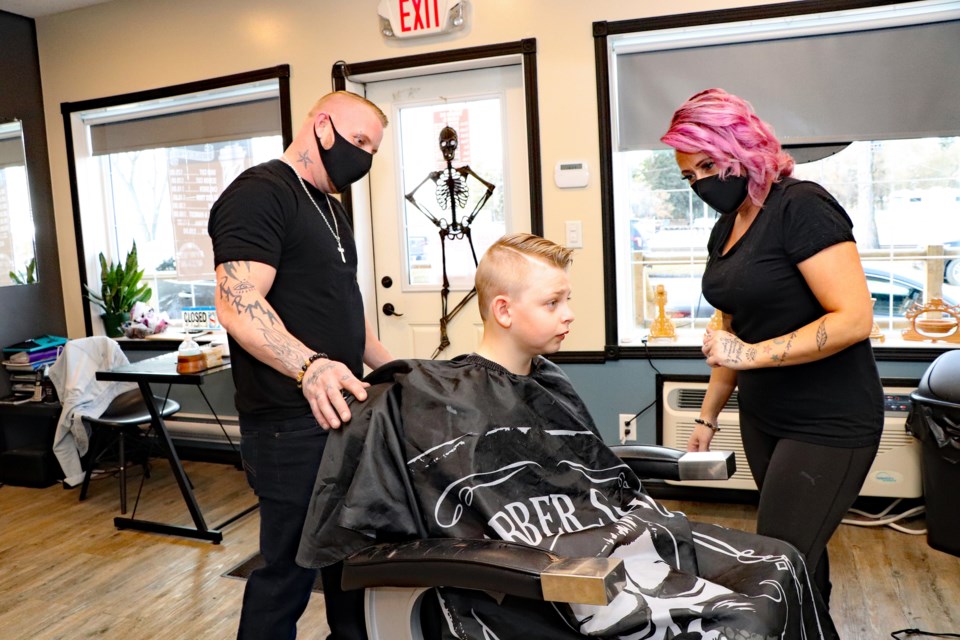 The intentions by Natalie Klein and husband Yanik Brazeau, co-owners of Bladez 2 Fadez Barbershop, to defy the premier’s Jan. 7 order for hair-stylists and barbershops to be closed is being supported and advertised by Innisfail councillor Glen Carritt, who is currently running for mayor and promoting the business couple’s defiant stance on his Facebook page called Glen Carritt - Working With The Community Moving Innisfail Forward.

“He contacted me and wanted my approval if he could be part of this and stand up for small businesses,” said Klein, adding the councillor even created a graphic for the protest campaign.

Carritt told The Albertan he is standing behind the couple to “open up” because the small business owners are in a situation where they can no longer pay their bills and are at the “end of their ropes.

He said he has written a letter to the premier’s office asking Jason Kenney to reverse the two-week COVID restrictions for small businesses so they can open and operate safely to resume earning a living.

Effective Dec. 8 barbering and hair-styling businesses were ordered closed for 28 days, and that order was extended Jan. 7 for an additional two weeks.

When asked by The Albertan whether he was in danger of advocating a citizen to break the law, the town councillor said the couple was at their ‘wits’ end of being able to survive” and could lose their business and livelihood due to the provincial government COVID restriction extension.

“They can’t hang on for two more weeks,” he said. “And what is going to happen after two weeks? Are they (provincial government) going to extend it again?

“They are perfectly willing to go through all the precautions and have spent the money on those precautions to make it safe. They are not in denial of anything,” added Carritt. “There just seems to be quite the hypocrisy as to who can open and who decides what business is essential and what business isn’t essential.”

Klein said she fully abided by the province’s original 28-day COVID order brought in Dec. 8 but will not do so for the two-week extension.

“We can’t survive. That is just not my business. That is hundreds of emails, people contacting me saying, ‘yes, this is true,” said Klein, adding the hair salon will be open at 10 a.m. on Jan. 12. “Meanwhile, we have government elected officials doing what they want, so there is something seriously wrong.

“The most upsetting part of this is that everything is open except for personal services, and when I got to the point to see that even dog groomers are open and that is deemed as an essential service, although there have been cases with animal transmission,” she added. “I don’t understand how that is essential but humans cannot get a haircut to make themselves feel better about their own mental health. That is seriously messed up.”

Klein added she and her husband are fully prepared to face the legal consequences of defying the provincial order.

“Yes, because there is so many people tired of the government. The promised (business) grant? That has not even been looked at in my case,” she said, adding the shutdowns have had a devastating impact on the couple’s business that first opened last August. “Four weeks with zero income except for a CERB payment is not going to cut it.”

The business protest campaign has caught the attention of other members of Innisfail council. Mayor Jim Romane said he was upset by Carritt’s comments, insisting they did not reflect the views of town council as a whole.

“He’s working with people to break the rules. As an elected official I don’t know if he should be getting involved in that level. Golly, it’s certainly not going to be well received by council,” said Romane. “If he’s supporting that it's really too bad because he runs the potential for prosecution of breaking the law."

There were other members on council who are concerned that any local political participation could be a violation of the town’s Council Code of Conduct Bylaw.

“As a councillor there is a code of conduct to follow and we clearly have to follow government rules, and that includes public health orders,” said Coun. Jean Barclay.

“I do understand the frustration of business owners who are mandated to close or are at limited capacity, but the only way for us to get through this is to follow the public health orders,” she added. “Look at the strides that have been made in our area on the last few weeks.”

Coun. Don Harrison was blunter, saying Carritt’s participation was “not good at all”, and that he may have broken a public trust.

“We are put in a position of public trust. We need to lead by example. Our code and oath say we must follow and adhere to the laws of Canada, the province and our local bylaws and regulations in the community,” said Harrison. “Our code of conduct says it. We’ve sworn an oath and I feel he’s breaking that.”

Carritt responded by stating he “adheres” to the Council Code of Conduct Bylaw, noting he is not the one who is breaking the law, only supporting the local couple to "move forward.

In the meantime, an Alberta Health Services (AHS) spokesman has issued a statement that AHS is aware that some Albertans are actively promoting re-opening their business despite mandatory restrictions.

"At this time, hair-styling and barbering services are not permitted to operate under the current public health restrictions, which will remain in place at least until January 21," said the statement. "As such, all businesses are required to respect and follow the orders of Alberta's Chief Medical Officer of Health, at all times. "Businesses that don't follow the orders are at risk of closure orders or fines."