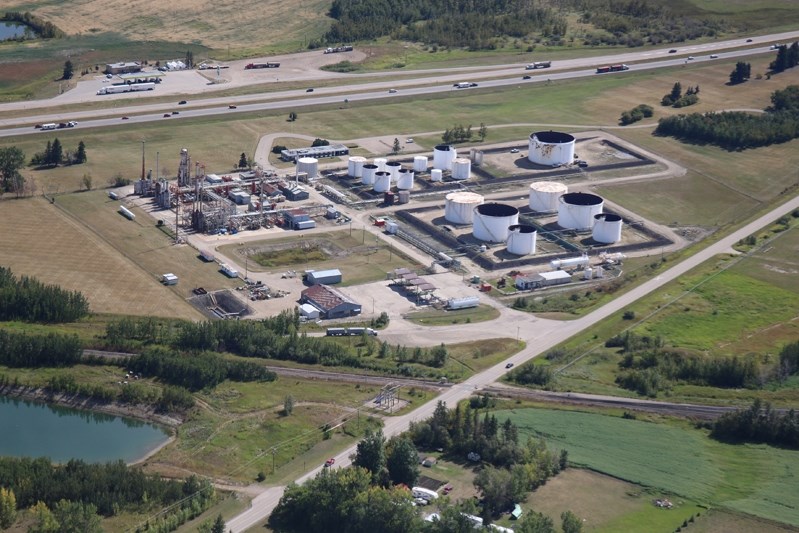 Construction is expected to start this summer on the new $90-million motor oil re-refinery at the northeast corner (left-centre) of Parkland Refining Ltd&#8217;s site two kilometres north of Bowden.

BOWDEN – A new $90-million motor oil re-refinery proposed for a site near Bowden has taken a big step forward in becoming reality.

Gen III Oil Corporation announced on Jan. 17 that it has signed a 20-year lease to set up its project on the northeast corner of Parkland Refining Ltd.’s property, two kilometres north of Bowden.

"It’s dead centre in the province,” said Gen III president George Davidson in an interview with the Province. He said the location was part of the reason the site was chosen.

It’s also because a lot of infrastructure is already in place at the site, where the TSX Venture listed company plans to construct the re-refinery on process pads currently in place after taking down the existing Parkland refinery structures, said Davidson.

The company is still in discussions with Red Deer County and Alberta Environment and Parks on the necessary permitting, he said. Red Deer County confirmed no development permit application has been received yet.

The re-refinery plant will take used motor oil and re-refine it, making it into a product that can be sold.

This will be the third re-refinery built in Canada, but the first to be able to refine Group III synthetic oils, Davidson said. The Gen III facility will be able to make Group II and Group III oils, while the other two facilities in Canada make just Group II.

"This is a great story for Alberta,” Davidson said. It’s also a good environmental story, he added, noting the company expects to produce a large number of carbon offset credits.

"It’s a good news energy story for Alberta,” he said. "We’ll be looking at something like generating in excess of 360,000 tonnes a year in GHG (greenhouse gas) credits.”

Construction is expected to start this summer, with a target of being a 2,800-barrels-per-day operation by the end of the first three months of 2019.

Davidson said there will be about 25 full-time positions after the facility opens, and a large number of jobs created by the construction efforts.

Leroy McKinnon, a senior corporate communications specialist for Parkland Fuel Corporation, of which Parkland Refining Ltd. is a subsidiary, confirmed in an email that the lease has been signed.

"It is an attractive project for Parkland,” said McKinnon in an email. He said that Parkland uses the property as a fuel terminal.

A news release from Gen III said it has agreements in place for the sale of all its finished products once commercial production starts.

Area mayors say it’s a promising sign for the county and Bowden.

"It’s always exciting to see a development in the region,” said Red Deer County mayor Jim Wood. He said there have been signs like this that the economy is picking up.

He said he can’t speak to the specific project or application regarding development permitting, but said Red Deer County tries to make the process as fast as possible.

Bowden mayor Robb Stuart sees potential for his town and the region in the re-refinery coming online.

"It sounds really good,” he said. "It’s very promising for our area.”

That’s especially with all the workers who will come to the area during the construction, and Parkland running the fuel terminal, plus the new Paterson Grain terminal, said Stuart.

The town used to host a number of professional services that have dwindled over the past couple of decades, he said.

"We have 1,200 people and a lot of them are seniors, but still if we can get our business up and running again I think it would be good spinoff for the town as a whole,” Stuart said.

"It's always exciting to see a development in the region."

Region's hail blast from ‘another planet’
Jul 14, 2020 4:00 PM
Comments
We welcome your feedback and encourage you to share your thoughts. We ask that you be respectful of others and their points of view, refrain from personal attacks and stay on topic. To learn about our commenting policies and how we moderate, please read our Community Guidelines.