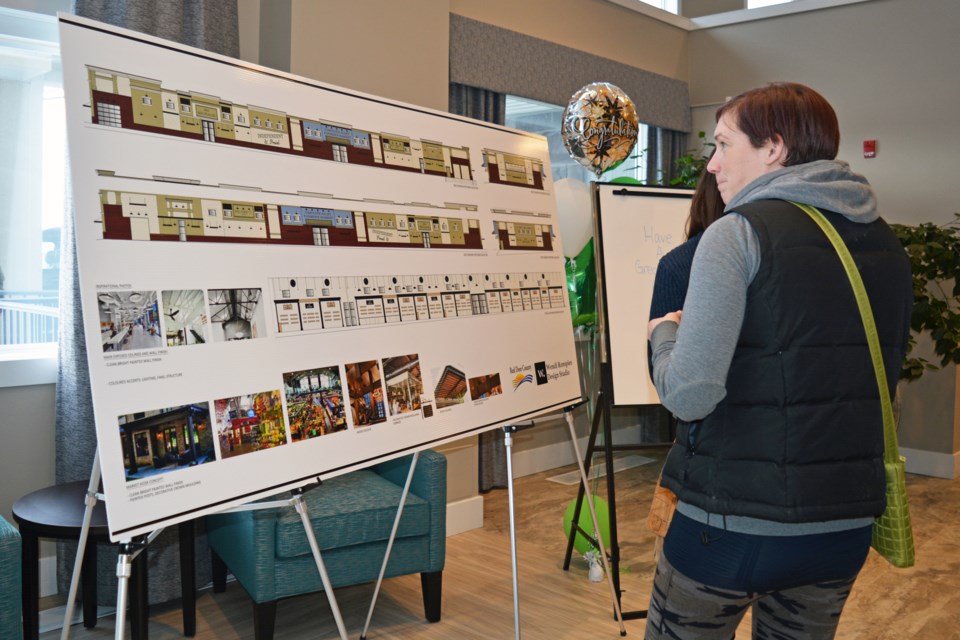 Brittany Jevne, of Red Deer, looks over the plans for the new Gasoline Alley Farmers' Market, during an open house in Gasoline Alley on Feb. 22. Kristine Jean/MVP Staff

RED DEER COUNTY – A new year-round farmers market is coming to the region.

Potential vendors, local producers, artisans and members of the public gathered in Gasoline Alley for an open house and information session on Feb. 22.

The event was hosted by Red Deer County.

“We’ve heard from our local producers, the business community and residents. Over the last couple of years we’ve done quite a bit of market research to see whether there would be an appetite for it and there certainly is,” said Tara March, business development officer for Red Deer County. “This would be the first indoor, year-round farmers market in the Central Alberta region.

“A lot of our local producers do sell their goods at markets, whether it be in Innisfail, Calgary or Edmonton, but there is definitely an appetite for these local producers to be able to serve their goods to their neighbours here in the Red Deer region,” she added.

The Gasoline Alley Farmers' Market will be a permanent 25,000-square-foot structure, modelled after the Calgary Farmers' Market, that will help link rural and urban populations, noted March.

Although the market is a private endeavour with no Red Deer County taxpayer dollars contributing to the project, said March, the county has worked closely with developers, investors and local producers to help promote and support the venture.

The Innisfail Growers organization is partnering with several area businesses and investors for the farmers market, including Rick Wiebe, a local business owner in Red Deer.

“We’re going to start off by opening two days a week and as demand increases we’ll open it up three days, and then we’ll increase it from there,” said Wiebe. “Central Alberta really needs a farmers market that’s open all year round.

“It’s a great opportunity for Central Alberta to become involved in Central Alberta, and that’s what really is exciting about this project,” he added.

The farmers market will include 48 vendor spots, a food court that will have several restaurants or eateries, a local craft brewery and a children’s play area.

The market, located at Laura Avenue and Lantern Street in Gasoline Alley, is expected to begin construction this spring and be ready to open this fall.

Red Deer's Brittany Jevne was one of many interested members of the public attending the open house on Feb. 22.

“I think it looks great,” said Jevne. “I’ve been to the Calgary market and I regularly go visit Calgary just to go to the market, so it’d be awesome to have one here.”

Red Deer County mayor Jim Wood, who was at the open house, said bringing a year-round farmers market to Central Alberta will be a boon for the region.

“I look at this as a real bonus for not just the producers but the residents of this region,” said Wood. “To be able to buy these fresh items right straight off of the farms and straight to their homes.

“It will be a place to gather,” he added. “I believe that it will be a place that people will want to come to and it will add to the amenities that we already have here. We’re very happy at Red Deer County to see this happening. We’re excited,” Wood concluded.