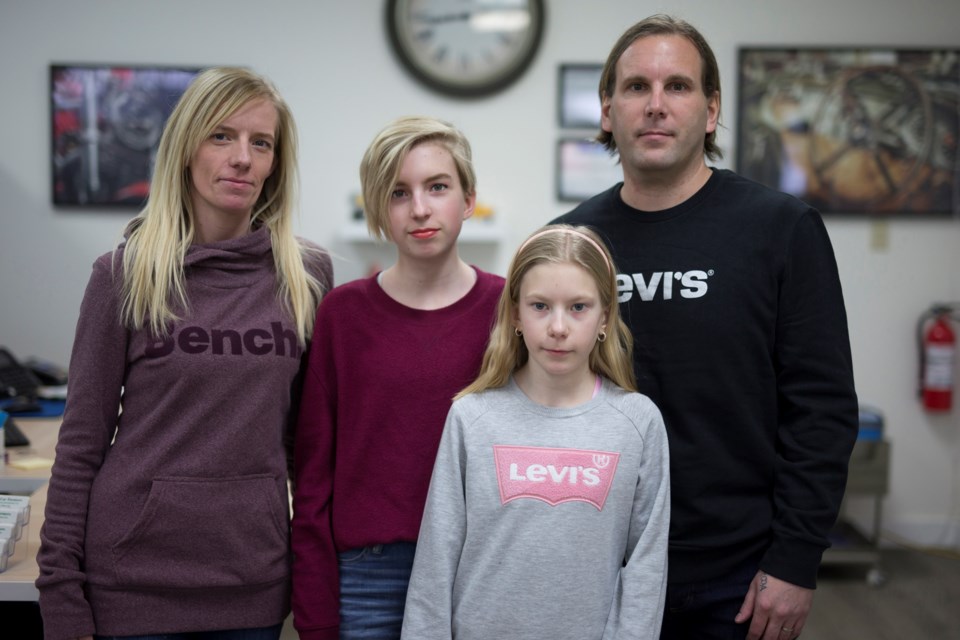 A local family is angry over deep budget cuts to Innisfail youth programs, particularly those for the Boys and Girls Club, which they have personally supported with thousands of dollars and the membership of two daughters. From left, Danielle, Madi, Tilly and Kyle Blazenko in Penhold on Nov. 29. Noel West/MVP Staff

INNISFAIL -- The town is assuring the community it’s not abandoning youth programming needs and will continue discussions on how best to move forward following last week’s bombshell announcement of deep provincial funding cuts that adversely impact more than 200 local youth.

“We are not done talking about youth programs for sure,” said Todd Becker, the chief administrative officer for Innisfail. “The conversation regarding supporting youth in the community is going to continue on.”

On Nov. 28, Red Deer’s Youth HQ announced that as of Dec. 31 its Big Brothers Big Sisters (BBBS) and Boys & Girls Club (BGC) programs in Innisfail would no longer receive provincial core funding of $24,600 each. The agency, which coordinates both Innisfail programs, said the result would mean all community-based BGC programs in town would be discontinued while the BBBS teen mentoring program would end. BBBS will continue to operate its community-based and adult supported in-school mentoring programs. The programming changes would impact 205 local youth, said Youth HQ.

“It was a very difficult decision. It was very difficult on our staff. They probably know better than anyone the effect of this,” said Randy Nicholls, the chair of the agency’s board. He added that if provincial government base funding does return the agency would be happy to reboot the lost programs. “Without this base core funding, it is not sustainable. If we had the base funding (back) we would be very happy to go there. Our staff would love to get back there.”

The funding cut announcement triggered a firestorm on social media, led primarily by Innisfail’s Kyle Blazenko, a financial supporter of the BGC who has two daughters in the club. He was not blaming the province on the loss of the youth programs. Instead, he set the target of his anger squarely on the Town of Innisfail.

“Just because the province cut back on some of their funding the town is using that as a cop out,” said Blazenko, who posted an emotional video on his business Facebook page to blame the town for cutting “all funding” for the BGC.

“It does not mean the town shouldn’t be creative or find a way to keep it going or cut back on some ridiculous spending they are already doing,” he said. “We are not talking about hundreds of thousands of dollars here. We are talking about 24 grand, and a whole bunch of youth.

“If you can’t keep both programs going keep one of them going,” added Blazenko. “Do you know how easy it is to raise 24 grand, but do you know how much easier it is to just not raise it and cancel the program?”

However, Becker emphasized the issue of current and future local government support for the town’s youth is far from over.

“I am expecting the town to look at developing a youth strategy due to the provincial funding cuts and as part of council's strategic priorities as identified in the town's Strategic Plan,” said Becker, adding the issue of future youth programming is expected to be publicly discussed at a special town council meeting on Dec. 2. “I can’t tell you how that is going to look at the end but it requires community engagement. We do need to keep talking, the town and including these agencies about how we best move forward.”

He noted the provincial government is redesigning its approach to service delivery to ensure equitable access to evidence-based prevention and early intervention services throughout the province, and amongst all age groups.

“This is forcing the town and community to reconsider traditional funding of community programs such as the Boys and Girls Club and Big Brothers Big Sisters,” said Becker.