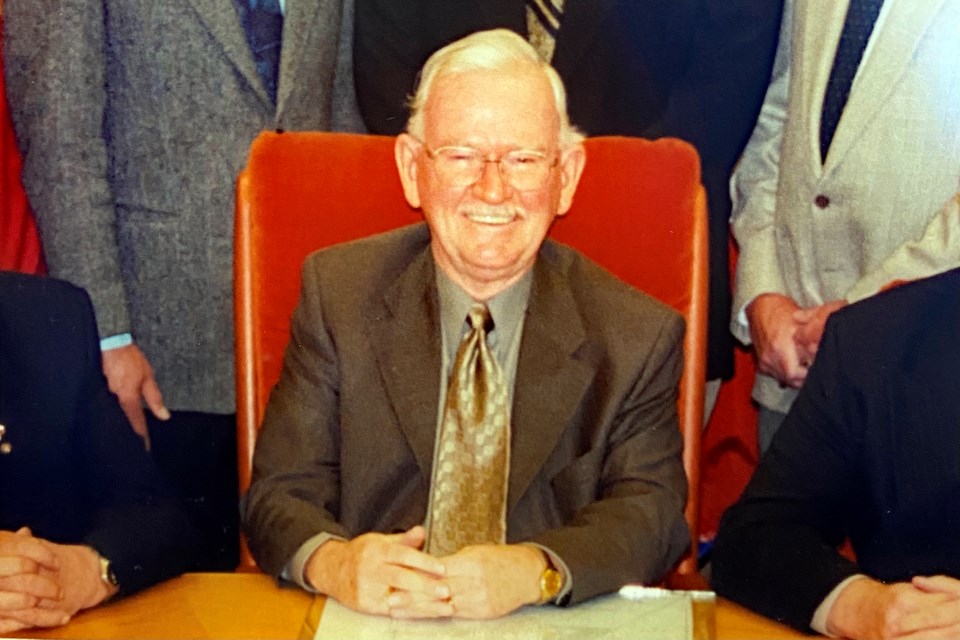 A photograph of Ken Fulton during his time as mayor. The late two-term mayor of Innisfail passed away on Jan. 12. Photo courtesy of the Town of Innisfail.

Her husband Ken Farley Fulton had passed away on Jan. 12 at the age of 86. A proud citizen of Innisfail for more than 43 years, Ken was considered an icon of the community, serving citizens in countless ways, including 11 years on town council, with two terms as mayor from 1998 to 2004.

The Innisfail couple brought flowers to Linda, his wife of more than 51 years. The couple had moved to Carstairs in 2017.

“As we were putting them on the porch Linda opened the garage door,” said Norma, noting they were all still mindful of the COVID-19 pandemic. “We stood outside with our masks. She was inside the garage more than eight feet away.”

Back in Innisfail, the town flag was already at half-mast to honour the passing of the former beloved citizen who had made such a profound impact on the community for more than four decades.

“He was a very honest man, and a man of great integrity. He kept his promises and told the truth, and if he made a mistake, he admitted it,” said Bill, who noted Fulton’s volunteer work for many community organizations, including the Innisfail United Church, Innisfail Lions Club, Innisfail Curling Club, Christmas Bureau and many others.

“He was the bookkeeper and the accountant. He had a real talent for finance, and like I said he was a real honest man, and people felt comfortable with him looking after the finances of their organizations. Trustworthy and attention to detail, he had that down to a science.”

A lifelong educator and community service leader, Fulton was vice-principal and principal of Spruce View School for 18 years, and was elected to positions on the local school board.

As an Innisfailian, he was always involved with helping in any way he could, whether it was for service clubs or any citizen seeking advice.

“What I remember most was his dedication to our community,” said Tracey Walker Kinsella, a former town councillor who began her time on council as Fulton was retiring from public life. “He showed that with strong leadership, and that’s what really helped me determine that I wanted to contribute to my community the same way.”

Mayor Jim Romane, whose long service on council stretches back to Fulton’s leadership, remembered his predecessor as a “young thinking” mayor and always positive.

“He was an excellent mayor, very thorough,” said Romane, who directed town administration to have the town’s flag lowered at half-mast. “He was active on committees and such, even after he retired as mayor.”

Patt Churchill, a former Innisfail councillor for 20 years, remembered Fulton as a “very gentle person” and who was fair, a good listener and a leader who ensured voices were heard.

“He was just an all-out wonderful man,” Churchill said. “He didn’t just listen, he actually heard what people said, a very fair person.”

As for his legacy in leading the Town of Innisfail as mayor, no one worked more closely to Fulton than Dale Mather, the town’s former chief administrative officer.

“He was an excellent mayor for the Town of Innisfail. He always had what was best for Innisfail residents in mind,” said Mather, emphasizing Fulton was always supportive of town staff. “He always treated them and residents fairly.

“I believe his accomplishments were due to his financial knowledge, and his way of working with the people."

Mather said he agreed the late mayor’s keen sense of money management helped secure the town’s long and deserved reputation as a fiscally responsible municipality, one that today has zero debt.

“That was one of his strengths, the financial. He made sure that you were getting good value for your money, and if you didn’t have to borrow, you saved money and spent it on the residents,” said Mather. “If you look back in the records, Innisfail was always in very good shape financially.

"The province used to do comparison analysis with all the municipalities and we were always near the top.”

A Celebration of Life service is being held in Ken Fulton’s honour at a later date.