Cause of weekend residential blaze considered accidental
0
May 14, 2020 11:00 AM By: Johnnie Bachusky 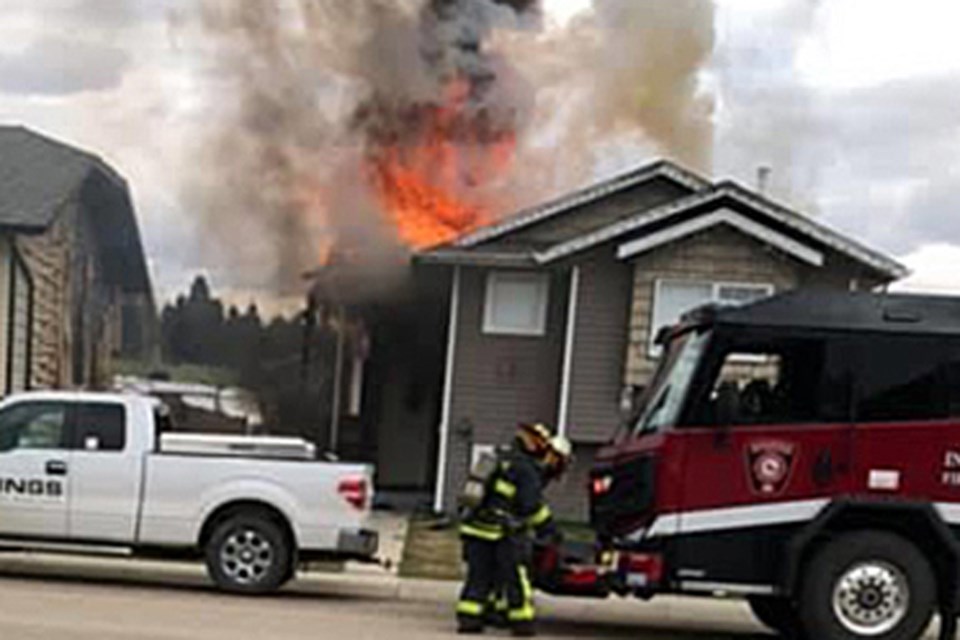 INNISFAIL – An accidental fire that involved a pair of single family dwellings on the west side of town caused extensive damage.

Fourteen members of the Innisfail Fire Department were dispatched to a west-side residence on 56th Avenue at about 5 p.m. on Sunday, May 10.

Fire Chief Gary Leith said when firefighters arrived at the scene they found the front and roof of a residence fully engulfed with flames, with the fire threatening to spread to an adjacent property.

Leith said firefighters quickly deployed two attack lines to knock down the flames, with another two to protect the adjacent home.

“That (second home) was starting to get involved,” he said, adding damage to the first home was ultimately extensive while the neighbouring second residence sustained heat damage to the exterior.

“We were able to stop the fire there and also the main fire.”

Leith added the blaze to both homes was put under control in about 20 minutes.

“To get full extinguishment we had to open up sections of the interior, and (do) a large salvage operation to protect the occupier’s items that were still in the building,” said Leith of the firefighters’ work for the main fire.

He said there was one person inside the residence of the main fire at the time of the blaze, and he was safely evacuated. Leith added no firefighters sustained any injuries.

He said the cause of the blaze appears to be accidental and not considered to be suspicious in any way.

He said estimated damage to the house that sustained the brunt of the fire is about $200,000, while the cost of the damage to the other home is believed to be about another $20,000.

“The crews worked hard and brought the fire under control quickly, which prevented additional damage to the neighbouring property and the property that was originally involved,” concluded Leith.

Red Deer County reopening playgrounds
May 28, 2020 11:00 AM
Comments
We welcome your feedback and encourage you to share your thoughts. We ask that you be respectful of others and their points of view, refrain from personal attacks and stay on topic. To learn about our commenting policies and how we moderate, please read our Community Guidelines.