Mayors from across Central Alberta are breathing a little bit easier today after hearing about the federal government's increased funding plans for infrastructure in Alberta.
Apr 5, 2016 1:00 AM By: Kristine Jean 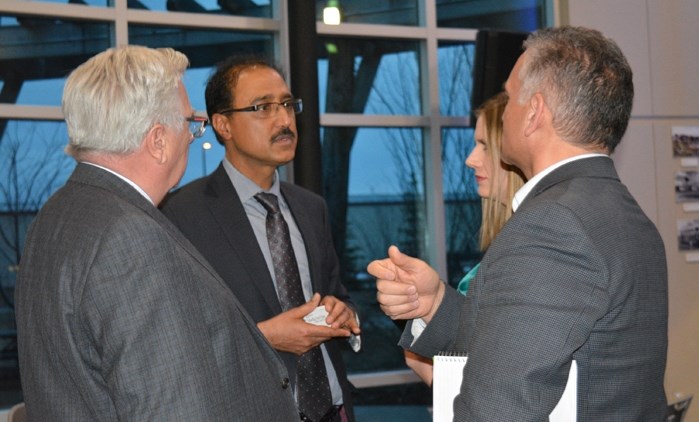 Amarjeet Sohi, minister of infrastructure and communities, left, with Penhold mayor Dennis Cooper at the Mayors’ Forum in Red Deer on March 29.

Mayors from across Central Alberta are breathing a little bit easier today after hearing about the federal government's increased funding plans for infrastructure in Alberta.

Area mayors heard the news from Amarjeet Sohi, minister of infrastructure and communities, at a Mayors' Forum on March 29 in Red Deer.

It was news that was especially welcomed by Innisfail mayor Brian Spiller, especially Sohi's point that the federal government will increase its monetary portion of funding partnerships with the province and municipalities.

“They're going to increase their share of the Build Canada (fund) portion to 50 per cent from 33 per cent, thereby lowering the municipalities' portions to 16 per cent, which will make it much more affordable for us to do infrastructure projects -- be it roadway, water, wastewater, recreation or culture,” said Spiller.

Sohi told mayors the federal government is committed to trigger growth in the economy with a $120-billion investment in infrastructure over the next 10 years.

The Trudeau government announced the record amount of money planned for infrastructure projects across the country in its first budget, released March 22.

Although exact amounts of funding for each province have not yet been confirmed, that commitment means billions of dollars in a variety of areas across the country that include transit, water, wastewater, flood mitigation, recreational cultural facilities, affordable and social housing and issues of homelessness.

“Once the budget is approved my next step will be to sit down with the provinces to sign bilateral agreements with them,” said Sohi. “After that we will be able to announce how much money each province is going to get in each of those categories.”

Meanwhile, Spiller said the town needs ongoing government financial support for its sewage wastewater plant reclamation project, which is now about to start (see pages 12 and 13).

“Maybe some of this new money will help us fund some of the furthering work we are doing there,” said Spiller, adding other areas to focus on in the future include street reclamation and sewer relining in Innisfail.

“We have lot of projects in the future that we could move up if funding did become available,” said Spiller, noting that if and when it does, timing and preparation will be key priorities.

“Timing is a big thing,” he added. “(The minister) said be ready, be shovel ready and get to the front of the line.”

Penhold mayor Dennis Cooper heard the same message, and he promises his town will be ready.

“Getting the details and being shovel ready are the best things we can do at this present time so that we can move our town forward and hopefully get a chance to get some of this federal funding,” said Cooper, noting the matching grants from the province will be a big factor in the infrastructure work that is done.

“April 14 is going to be an important day for us when the (provincial) budget comes out,” he said.

Sohi said he clearly heard questions and feedback from the mayors in attendance and is working to ensure they get the answers and funding they and Albertans need. He noted some of that funding is coming in the form of previously allocated money --$700 million -- that never made it to Alberta.

“What mayors want is flexibility. They want to ensure they have the maximum flexibility to allocate those resources based on their community needs and we understand that,” said Sohi. “That is why I am here, to listen to the mayors.

“In 2014 the previous government allocated a significant amount of money for Alberta but very little of that money has actually been invested in infrastructure,” explained Sohi. “The prime minister has committed to allocate that 700 million dollars as quickly as possible and expedite that to deliver on the infrastructure needs of Alberta.”

"They're going to increase their share of the Build Canada (fund) portion to 50 per cent from 33 per cent, thereby lowering the municipalities' portions to 16 per cent, which will make it much more affordable for us to do infrastructure projects."