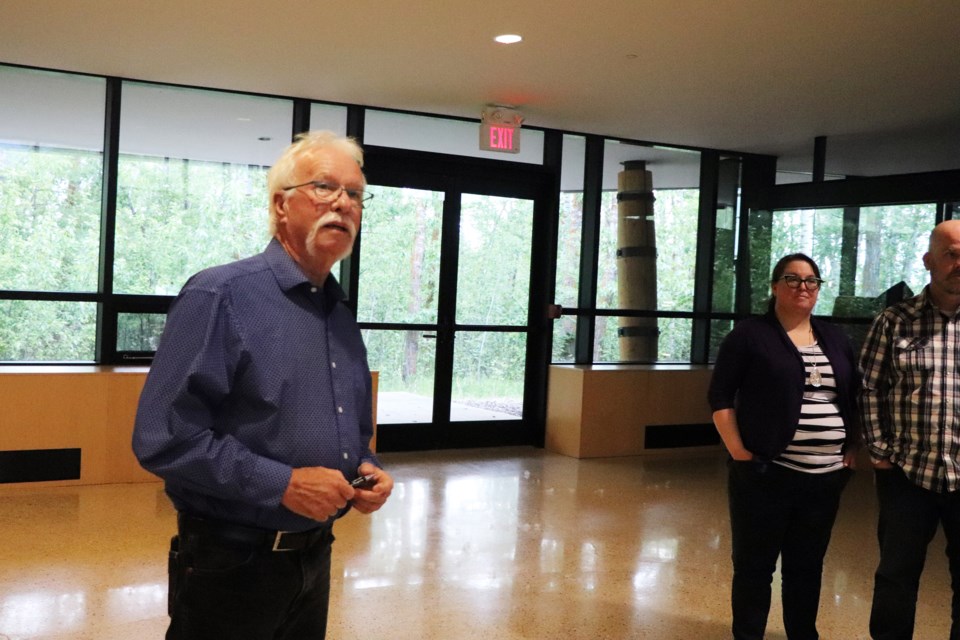 Don Harrison addresses the three other candidates and other onlookers Monday night (June 8) after it was announced he won the byelection to sit on Innisfail town council. Johnnie Bachusky/MVP Staff

INNISFAIL – Hard work has paid off for Don Harrison.

For the past 18 months, the 66-year-old retired senior provincial government bureaucrat and former mayor of the Town of Onoway, attended almost every town council meeting and set a blistering pace around town to spread his message during one of the most unique and challenging byelections in Canadian municipal history.

He came away a convincing winner for the lone vacant seat on town council, left empty since March when Doug Bos resigned to concentrate on his business affairs.

Harrison's win is believed to be the first victory in any election at any government level In Canada during the COVID-19 pandemic.

A total of 626 citizens voted in the byelection, which Is 11.9 per cent of the 5,265 local citizens who were eligible to vote. Harrison claimed 259 votes of those cast, followed by second place winner Daryl Hillman who had 188. Patrick Teskey came in third place with 157 votes, followed by Jim Kristinson who had 21.

Immediately following the election vote announcement at the Innisfail Library/Learning Centre, Harrison graciously addressed and saluted the other three candidates, who were joined by family members and current members of town council.

"We all made history. We've never been through anything like this before. Campaigning in the middle of a pandemic is something we will be able to tell our grandchildren,” said Harrison, who is a past manager of the Royal Canadian Legion Branch #104 in Innisfail. “There’s still lots of work that needs to be done. In my view there’s not a winner or loser here. We all campaigned on the same issues and there is lots of work for all of us to do.”

Mayor Jim Romane, who attended the learning centre for the final election vote result, said he believes Harrison had his “heart” in the campaign and will do a good job for citizens. He also saluted the other candidates for the quality of their campaigns.

“All four were quite capable for sure but there was room only for one,” said Romane. “The others can work at it for the general election in a year and a half.”

Second place finisher Hillman, a well known and respected business leader in the community who ran for public office for the first time, was equally gracious in defeat. He noted the byelection campaign had its serious challenges.

“The difficulty was that you couldn’t talk to people during the last month because of COVID-19. I would have rather done that but we couldn’t do it. I was told not to,” said Hillman. “I tried hard to get my points out and went hard in the newspaper too, but it just didn’t work out this time. That’s OK. I will accept that.”

Hillman said he's considering running in the next general election in 17 months.

Teskey, a former newspaper editor in Innisfail and now director of marketing and communications at the Alberta Sports Hall of Fame, said he welcomed getting the experience of running in a municipal election but added it was an “odd” one to take part in.

“This is going in the record book as one of those elections unlike any other. At the very least my name is going to be in that,” said Teskey, agreeing with others it was a difficult byelection to campaign in. “I didn’t want to do door knocking because of COVID. I just did whatever I could online to create a presence, and I think I did a good job at that. But it was an odd election, a very weird time to get involved in but I did feel it was time for me to give it a go.”

Teskey said he's “leaning” towards putting his name forward in the next civic general election.

Kristinson, a former Red Deer citizen who moved to Innisfail just over a year ago, also noted the challenges of running in a COVID byelection as the restrictions did not allow him to hear the concerns of citizens. Nevertheless, he quickly offered Harrison his sincere congratulations for his victory.

“I want to congratulate Don. I think he did a really good job in his campaign,” said Kristinson. “I still want to be involved in the community and I will work towards that.”

He said he will  “probably” run in the next general election.

Meanwhile, Harrison will have little time to celebrate his byelection victory. In less than 24 hours after the vote count, he will be appearing at his first council meeting on June 9 as an elected town councillor.

“I am honoured and humbled that I got the support that I did within the community,” said Harrison, adding he has a lot of immediate hard work to do to get himself up to speed on being an Innisfail town councillor. “It is a matter of listening for a while and contributing where I can.”