Innisfail physicians worried about recruitment but not yet considering leaving province
Jul 30, 2020 5:00 PM By: Johnnie Bachusky 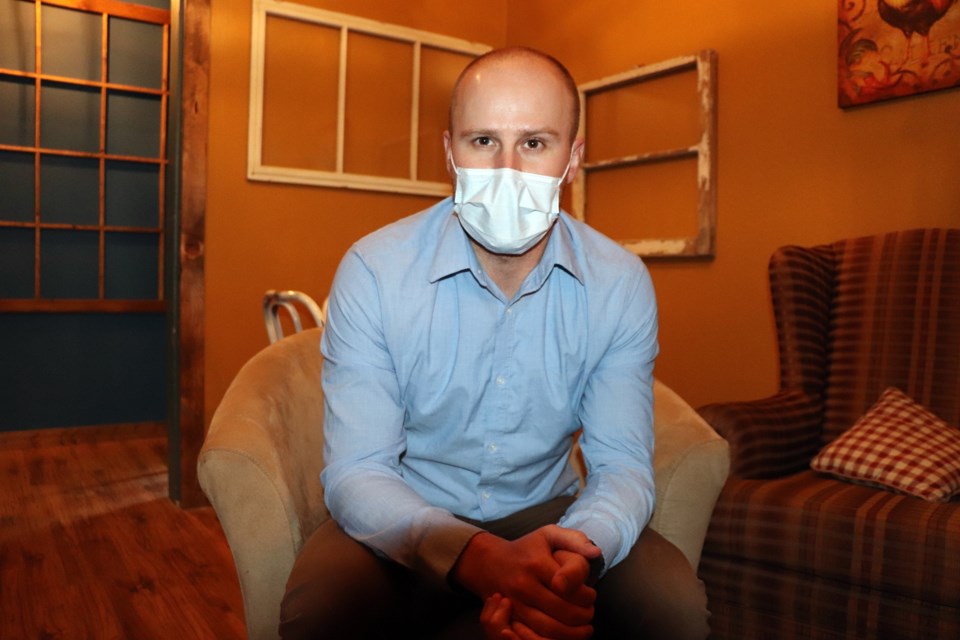 Dr. Jarritt Seeman, a partner at the Innisfail Medical Clinic, said there are no immediate plans by any local physician to leave the town and province due to the ongoing battle with the provincial government but the medical community is worried about future recruitment. Johnnie Bachusky/MVP Staff

INNISFAIL – Local doctors are not yet preparing to leave the province over their ongoing war with the Alberta government but they hang on “demoralized” and worried for the future of health care in the community along with the increasingly grim prospects of trying to recruit new physicians to replace ones who could soon leave or retire.

Dr. Jarritt Seeman, a 32-year-old partner at the Innisfail Medical Clinic and a leading local physician in the increasingly bitter battle against the province, said  doctors are "demoralized" with the fight, with the mood additionally pressure-packed with having to keep up to date with new developments through the COVID-19 crisis.

He said back in March when his clinic hosted a packed town hall meeting at the local legion they were primarily concerned about the financial feasibility to continue practising as the province was committed to several financial cuts to family and rural physicians.

“We were legitimately worried whether our clinic could continue to survive with the way we were seeing patients,” said Seeman in an interview with The Albertan on July 21. He added that while the Alberta government eventually backed off on a number of planned changes, which improved doctors’ immediate financial situation, the future still remains in doubt. The UCP government is still hedging on negotiations for a new contract and the Alberta Medical Association (AMA) is still going ahead with a lawsuit against the government.

“Since that time I feel worse because it’s not just about finances it’s about this constant lack of respect, personal and group attacks from the government, the concern about potential privatization coming into our health-care system, whether the government is overreaching in trying to control our health-care system without input from doctors. It just seems like an overall more toxic situation,” said Seeman, adding that the last four to five months has been the first time he’s been unhappy with his work.

“Having this constant fight with the government in the background really starts to wear on you.”

Seeman noted the Alberta Medical Association has tabled four to five proposals since last November when the province first announced sweeping changes for provincial physicians. He added the most recent was on July 1, and the government has yet to respond.

“That proposal offered to hold government spending at the $5.4 billion number they have requested,” he said. “It offered to work with the government to try to reduce spending in other areas. It was pretty much what the government had asked for, and the government didn’t even reply to it, which to me shows they are not really interested in negotiating at this point.”

In the meantime, the mood among many doctors elsewhere in the province is much the same, bleak and past the breaking point. Many physicians have either decided to leave the province, or have left already with a despondent feeling they are in an unwinnable battle against a government hell bent on breaking physicians’ resolve to continue the fight.

Seeman said notions of leaving the province and whether to continue to work at the local hospital have been discussed among the town’s dozen or so physicians.

“We have come to the conclusion that we want to be there for the town, especially through this crisis,” he said. “We want to be here when we hopefully start building our system back up. There are not any imminent plans at this time but it is certainly something we have discussed.”

With the decision to stay put local doctors must deal with another big issue and that is future recruitment, which is also increasingly worrisome.

“Over the last six months we have been hearing from a lot of residents, many of whom were born, raised and trained in Alberta that they are not even looking at coming to our community or any community in Alberta,” said Seeman, adding the town has been very successful over the past 10 years in recruiting young Canadian-trained doctors to the town, with many coming from the Red Deer residency program.

“So that is one area where we do feel we are going to take a substantial hit, is in recruitment and the ability to replace any future retirements that we are going to have in the town.”

Seeman said they did have a 2019 graduate come to town last January but that hire was arranged prior to the government’s announced changes last fall. Since then, he added, no other young doctors have shown any “definitive” interest to work at the clinic. Seeman said there are a couple of young doctors the clinic is hopeful for but if they chose to leave for greener pastures they would not be blamed.

As local doctors trudge forward they do so with committed community support. A sticker and button campaign with the message, We love Innisfail & Area Doctors & Essential Workers, has been launched.

“I think it may bring more awareness to it,” said Seeman. “I think just having that kind of visual reminder may cause more people to become involved or learn about what is going on or contact our MLA, who I think has been fairly absent from this conversation.”

The Albertan requested an interview with Innisfail-Sylvan Lake MLA Devin Dreeshen through his press secretary last week but was told he was unavailable.

Chinook's Edge School Division plans to have masks for all staff
Aug 4, 2020 9:00 AM
Comments
We welcome your feedback and encourage you to share your thoughts. We ask that you be respectful of others and their points of view, refrain from personal attacks and stay on topic. To learn about our commenting policies and how we moderate, please read our Community Guidelines.