INNISFAIL – Devin Dreeshen has thrown his hat in the ring to become the new United Conservative Party MLA for the Innisfail-Sylvan Lake riding. The 30-year-old son of federal Conservative Party MP Earl Dreeshen became the second candidate on Feb.
Feb 20, 2018 12:00 AM By: Johnnie Bachusky 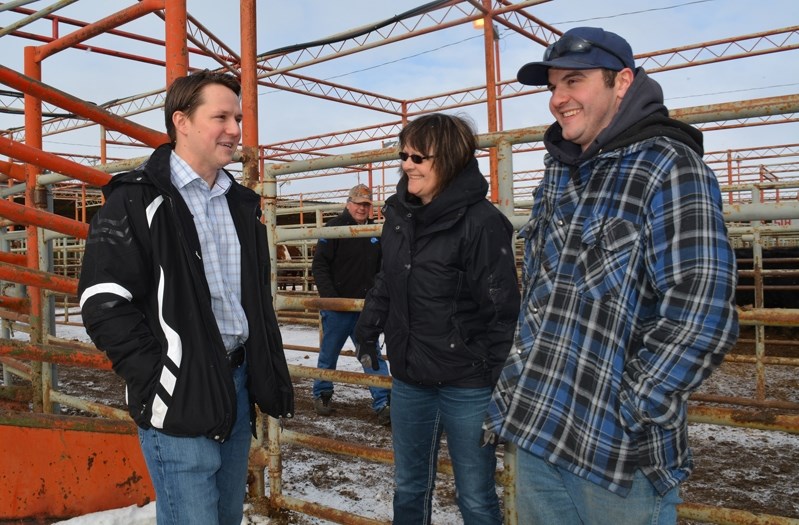 Devin Dreeshen (left) was out campaigning at the Innisfail Auction Market on Feb. 14, just one day after announcing he was seeking the vacant MLA seat for the Innisfail – Sylvan Lake riding.

INNISFAIL – Devin Dreeshen has thrown his hat in the ring to become the new United Conservative Party MLA for the Innisfail-Sylvan Lake riding.

The 30-year-old son of federal Conservative Party MP Earl Dreeshen became the second candidate on Feb. 13 to announce his nomination for the upcoming byelection in the riding.

Mike Walsh, the former co-president of the UCP constituency association, announced his candidacy earlier this month, while two others, lawyer Gayle Langford and Sylvan Lake realtor Joan Barnes, are also expected to run.

The latter two may want to announce soon because Dreeshen did not waste any time taking his message to the people. He was out campaigning the next day at the Innisfail Auction Market.

"I haven’t planned for any of this to happen, and with the shocking and sudden resignation of Don (MacIntyre) I decided that I always thought about this,” said Dreeshen. "I helped out Jason Kenney’s team and Jason Kenney himself from the very beginning when he started his whole unity vision and his five-step plan.

"I always wanted to do more with it so now the fact this opportunity came up, and Innisfail-Sylvan Lake is my home riding, I thought, ‘well, the best way to lead is to run,’” he added.

And of course he comes from accomplished political pedigree. His father Earl has been the local MP since 2008 and has been the overwhelming choice to represent the Innisfail-area riding over three general elections, capturing more than 73 per cent of the vote. However, the younger Dreeshen does not want to ride on anyone’s coattails. He chuckles at the notion there is any political dynasty in the making.

"I don’t think we think like that. I actually tease him that I actually made it to Ottawa before he did as an MP,” said Dreeshen. "I was in the Conservative Party internship program back in early 2008 before he became an MP. So I always tease him and say, ‘Hey, I was in Ottawa first.’”

And despite his relative youth, Dreeshen, a fifth-generation farm owner in the Pine Lake area, has a long record of community service, as well as experience working behind the scenes at the national political level.

He is a director of the Western Canadian Wheat Growers Association, serves as a board member on the Crossroads Agricultural Society, and a volunteer at the Pine Lake Country Fair.

His past work in Ottawa includes being an advisor to former Agriculture Minister Gerry Ritz and advocating for Canadian agriculture trade, improved rural infrastructure support, and part of the effort to end the Canadian Wheat Board monopoly.

"The Notley government is piling taxes and regulations on our farmers and our resource industries, while ignoring critical infrastructure needs of rural towns, villages and counties,” said Dreeshen of his passion to be a voice for local citizens in the legislature. "I want to join the United Conservative team in the legislature to tell the NDP they can’t ignore the people here.”

In the meantime, Dreeshen also promises change in the way their MLA relates to constituents. He wants to walk along Main Street and engage people, learn about their concerns and promise to fight for them in Edmonton.

"I think being out talking to people is the best way you can know how to be representative of the people. It is part and parcel of what makes a good politician, going out and talking to people."