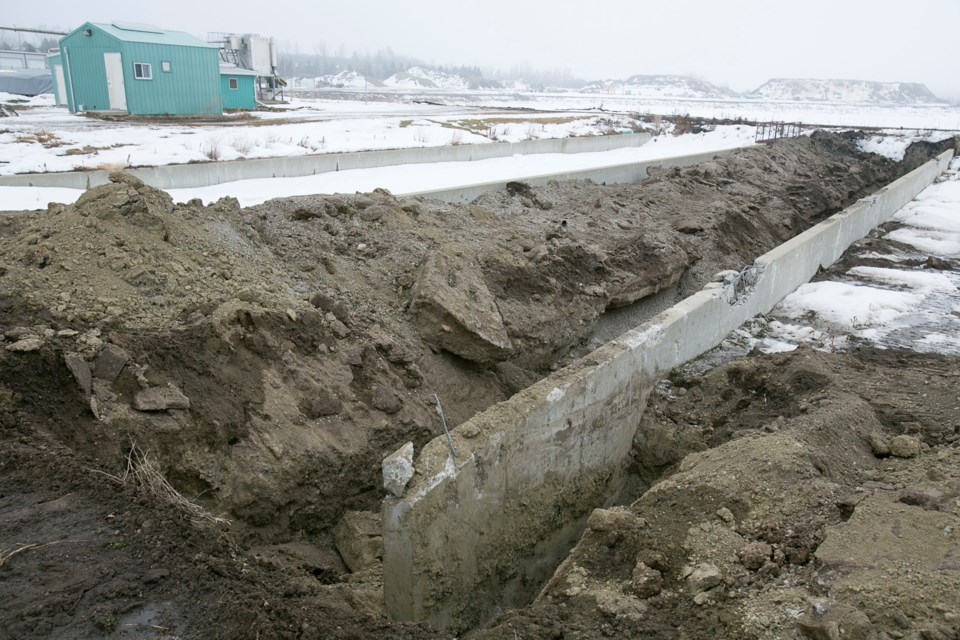 The site of the old sewage treatment plant in 2016 during the demolition process. The 55.6-acre site is now ready for development into a nine-lot industrial subdivision. File photo/MVP Staff

INNISFAIL - After five years of preparation the transformation of the town's old sewage treatment facility into an industrial park is about to take a big step forward.

At council's Oct. 28 regular meeting Red Deer's Northside Construction was declared the winning bid for the contract to complete the grading of the property, a 55.6-acre parcel of land in the town's southwest corner, the former site of the sewage lagoons and treatment plant. Northside's bid of $1,625,283.55 was selected over 12 others, which were as high as $3,970,398.

"Based on reference projects provided, Northside is very familiar with projects of this scale and demonstrated strong competency with grading projects," said Steven Kennedy, the town's director of operations, in his report to council.

An additional $171,247 for engineering services from Tagish Engineering was also approved by council.

Kennedy said the million-dollar project, including the engineering cost, is being funded from a $9-million Building Canada Grant the town secured three years ago for infrastructure projects. The grant is a three-way funding partnership between the federal, provincial and municipal governments.

The first work for the project began more than five years ago with environmental testing, which was completed with provincial government approvals in 2014. Remediation of the property and its facilities was finished two years later. Last year, wet sludge removal was completed. There was also provincial environmental approval to use existing dry sludge for site grading.

The prior work and government approvals led to the current phase, a first important step of development at the site to create a long sought additional industrial park for the town.

"We will be moving earth within the new development for the southwest industrial park in order to provide site grading for the lots, pre-grading for the roads as well as building one of the storm ponds for the development," said Kennedy, noting nine lots for future development have been marked out in the new industrial park.  "The next step after that will be the site servicing, sewer and water, and after that will be final road construction and legal development for the site."

Kennedy said construction for this project phase will begin this fall, with scheduled completion by the end of July or in August, depending on weather.

The project, along with another under the Building Canada Grant, has proven to be a money winner for the town since remediation began in 2016. Due to a favourable recessionary tendering process that year the town saved $1.2 million to demolish the decommissioned sewage treatment plant, a project that had a $1.3-million budget. That same year there was another $850,000 savings with the approved tender for the reconstruction and replacement of the northeast trunk main sanitary sewer line. The town budgeted just over $2.1 million for that project, but accepted a bid of $1.154 million from Sylvan Lake’s Urban Dirtworks.

More recently, just over $1 million was saved when it became known the costly work of dry sludge removal would not be necessary, a decision that would help fund the current grading plan.

Todd Becker, the town's chief administrative officer, noted one big "rough" savings of more than $1 million for the project came when it became known the costly work of dry sludge removal would not be necessary, a decision that would help fund the just approved grading plan.

"Through testing with Alberta Environment it (sludge) was declared soil, as there was no contaminants in the soil," said Becker. "We saved from our contract from not having it removed from our site, and actually being able to use it for our grading plan. It was huge savings, which was allocated back into the project."

When the infrastructure work for the new industrial park is completed, expected in 2021, the town is hoping its preliminary talks with potential investors will bear fruit. Mayor Jim Romane said there has been some interest from both local and outside investors.

"There has been interest. Nothing concrete," said Romane. "Some of the existing property owners down there have expressed interest in purchasing more (land) but nothing is certain until there is a deal on the table, but we definitely have got some interest in it.

"There have been questions of when it is going to be available. We are quite enthused about it," he concluded.