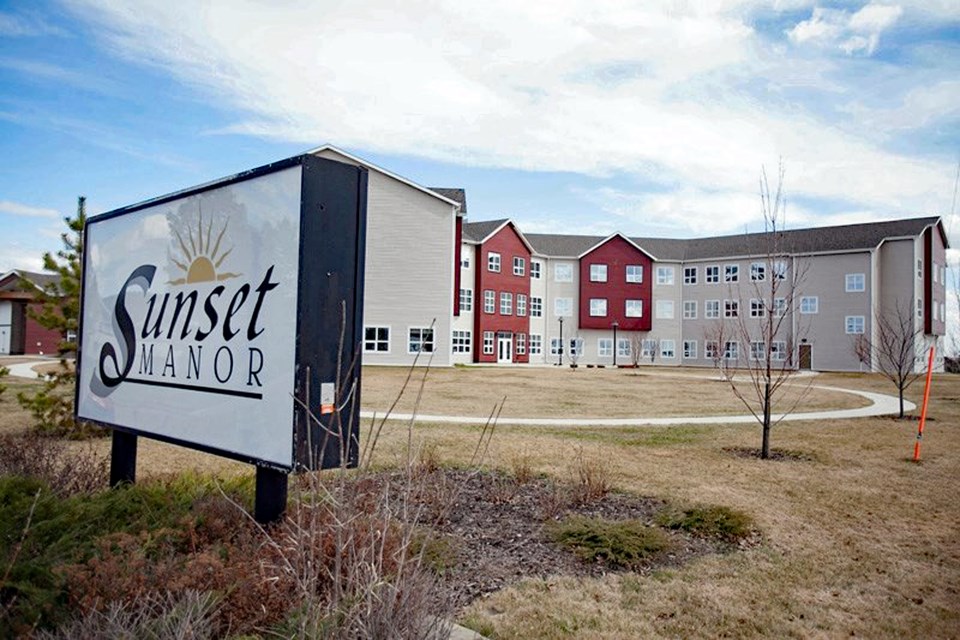 Two staff members have tested positive for COVID-19 at Innisfail's Sunset Manor, the first positive cases reported in the town's seniors' living facilities since the start of the pandemic more than 11 months ago. File Photo/MVP Staff

INNISFAIL – For the first time since the COVID-19 pandemic began more than 11 months ago, the potentially deadly virus has been confirmed at a local senior’s residence.

“As with all outbreaks, AHS continues to closely monitor the situations at these facilities, in collaboration with the operators, to ensure the necessary enhanced safety protocols are in place to protect residents and staff,” said Kerry Williamson, communications officer with AHS.

Gord Vandereerden, chief executive officer for Chantelle Management Ltd., the parent company of Sunset Manor, said the company has been vigilantly following all provincial pandemic protocols for the past 11 months to ensure the safety of staff and the combined 136 residents at the assisted living facility and its immediate neighbour Innisfail Country Manor, an independent living facility.

“We know one was a confirmed infection from her son at school, and the second we haven’t received confirmation, so we just have them stay at home even if they are asymptomatic," said Vandereerden of the positive cases and emphasizing they are the first confirmed ones for either staff or residents since the pandemic began 11 months ago.

“We are not worried about this. As long as we keep it away from the patients, we are rock solid,” he added. “To be honest with you we’ve been doing this since way back in March, and that is probably why we are one of the homes that haven’t had any casualties as a result of COVID.

“We’ve had other people have some signs that concerned us so we don’t allow them into the building, obviously, and they tested negative but we still had them quarantined for a period just as a precaution."

“I think that is a great thing. I think it’s good to be transparent,” he said. “I like that transparency because it allows us to really keep on top of what is really going on in the communities.

"Obviously, more data is better. We can start thinking about more restrictions, or less restrictions, especially when it comes to visitors for screening or testing based on what is going on in the community.”

Meanwhile, a senior leader of the Alberta Union of Provincial Employees (AUPE), the union representing workers at Sunset Manor, said they are “never satisfied” when they hear about COVID outbreaks at long-term or continuing care facilities as there are many questions that need to be answered.

“Where are they getting it? How are they bringing it in? We want to make sure that all the precautions have been made by the employer,” said Bonnie Gostola, the union’s vice-president responsible for the Central Alberta region.

“We are also very concerned for the potential for it to spread into the isolated residents of that facility where we already know the harm COVID has done, especially in long-term care facilities.

“It is very concerning to us. We are seeing it across the province, unfortunately, and we hope the employer is going to take the proper procedures and proper steps to ensure it doesn’t spread into the community, not only Sunset Manor but into the Innisfail community because that is huge. It’s already in the community."

The union leader said during an interview on Feb. 17 she had not yet been in contact with the company. “We are just hearing about this,” she said. “We are hoping they reach out to us sooner rather than later.”

As for COVID vaccinations, Vandereerden said residents at both Sunset Manor and Innisfail Country Manor have been vaccinated, except for the “few or their families” who have refused.

“There are always a percentage that for religious reasons or other issues who don’t want the vaccine,” he said, adding “some” staff have been vaccinated but not all due to recent shortages of vaccine, which slowed the company’s program by “several weeks".

“That is still underway,” said Vandereerden.

As for the union members, Gostola said all 90,000 AUPE members have the right and ability to make their own decisions on whether to receive a vaccination for COVID-19, or decline.

“We would like to see all our members take the vaccine but again those are individual choices we won’t impose on any of our membership. We have the right to make those decisions on our own,” said Gostola.