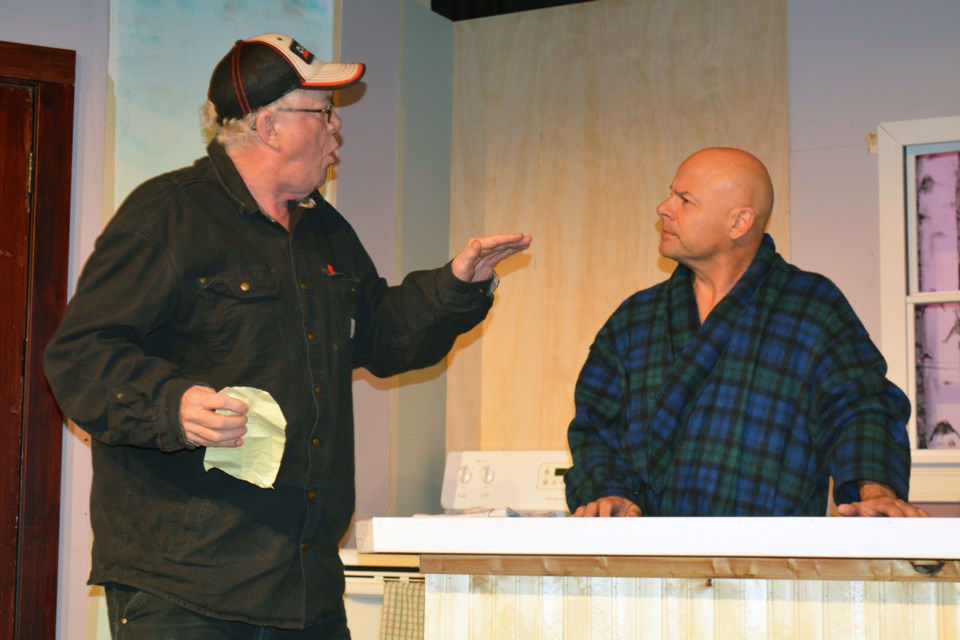 Robbin Edgar, left, and Glen Carritt rehearse a scene from the 2019 Innisfail Town Theatre's (ITT) fall production of Ethan Claymore. The COVID-19 pandemic has forced the cancellation of the 2020 fall production of Agatha Christie's And Then There Were None. File photo/MVP Staff

INNISFAIL – There will be no classic annual dinner theatre this fall from Innisfail Town Theatre (ITT).

Patrick Gleason, president of ITT, said last week that following a meeting with theatre group members earlier this month it was decided this year’s fall production at the Ol’ Moose Hall would not go ahead. COVID is to blame.

“We went over the whole procedures that Alberta Health required, the volunteers that we would need and just the whole volatile situation with COVID right now,” said Gleason, adding the ZOOM meeting was open to all ITT members. “We felt there was a risk factor that was really big. We have to keep our patrons and cast members (safe), first and foremost, as far as their health goes.

“We just thought that we would need at least 12 to 14 volunteers a night just to make sure everything was properly done,” he added. “And we just decided (and) unfortunately it was a difficult decision, to not go ahead with our current fall production.”

ITT was hoping to launch its stage version of And Then There Were None, which is based on the best-selling murder mystery novel by Agatha Christie. Gleason said the intended fall production was the same work ITT wanted for its spring presentation, which was also cancelled due to COVID.

Despite the cancellation of the annual fall production for 2020, Gleason said ITT is still looking to see if it’s feasible to put on just “straight” theatre this fall, without the dinner component.

“But time is closing in on us with regard to getting something done before Christmas. We are being on the safe side right now,” said Gleason, adding ITT members are now using the current dormant time to look over different plays that might be suitable for future productions. “We are still looking at a spring production for 2021.”

He said the decisions not to proceed with the spring and fall productions is also putting pressure on ITT’s finances.

“Our revenues are draining quickly,” he said. “We still have a building to maintain, we have utilities. We have all of that stuff. We are like a lot of other places, a lot of small businesses, and theatre companies. It is tough slugging.”

Gleason added the current situation could be the “toughest” in ITT’s 41-year history. He said in the early years of the group’s existence when they did not have the Ol’ Moose Hall as its home, and they were bouncing from venue to venue, they also faced enormous challenges.

“If we had a couple hundred dollars in the bank we thought we were doing pretty good,” said Gleason. “We don’t want to end up in that situation. We will make it into springtime and then things are going to get really, really tight.”