Employee who tested positive worked in both Olds and Innisfail Boston Pizza restaurants
Oct 14, 2020 10:10 AM By: Johnnie Bachusky 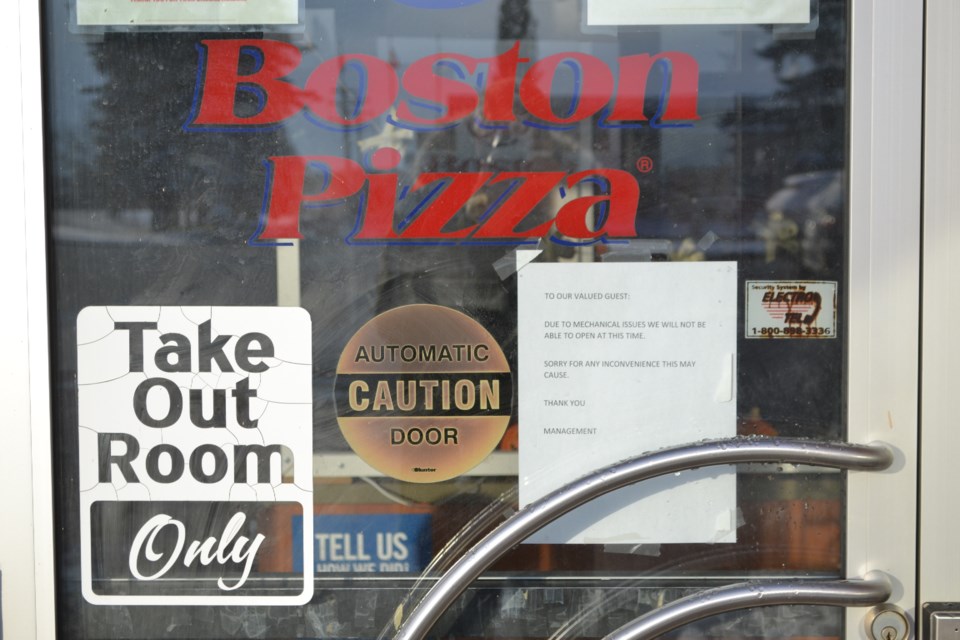 The Olds Boston Pizza takeout entrance door on the morning of Oct. 14. The owners of the Olds and Innisfail restaurants confirmed yesterday (Oct. 13) that a staff member who works at both locations had tested positive for COVID-19. Doug Collie/MVP Staff

INNISFAIL/OLDS – Boston Pizza restaurants in the Central Alberta towns of Innisfail and Olds are scheduled to reopen today (Oct. 14) after being shut down for two days when the ownership and management team became aware an employee tested positive for COVID-19.

In a news release, the ownership and management team for both outlets said the restaurants shut down immediately and initiated protocols for staff members to be tested.

The news release added that aside from those shifts the employee has not worked since Oct. 4, and has been removed from the schedule at both locations until cleared by Alberta Health Services (AHS).

The news release, which was issued publicly on Oct. 13, said a select number of people spent two days completing a “top to bottom” clean and sanitation of both outlets and would reopen on Oct. 14, which has been cleared by AHS.

The ownership and management team said in the release that all staff that will be working in the coming days have either received negative test results or had no close contact with the positive case.

According to Alberta Health Services case counts, the Innisfail local geographic area, which includes south Red Deer County, has had nine cases of COVID-19 since the start of the pandemic and as of this morning (Oct. 14) there were two active cases and seven recovered cases.

The Olds local geographic area, which includes north Mountain View County, has had 10 cases of which two are active and eight have recovered.

The Didsbury local geographic area, which includes Carstairs and south Mountain View County, has had 26 cases of which eight are active and 18 are listed as recovered.

The Sundre local geographic area, which includes west Mountain View County, has had one case since the start of the pandemic listed as recovered.

With files from Lea Smaldon

Innisfail drawing up backyard chicken vote question
Oct 21, 2020 5:00 PM
Comments
We welcome your feedback and encourage you to share your thoughts. We ask that you be respectful of others and their points of view, refrain from personal attacks and stay on topic. To learn about our commenting policies and how we moderate, please read our Community Guidelines.