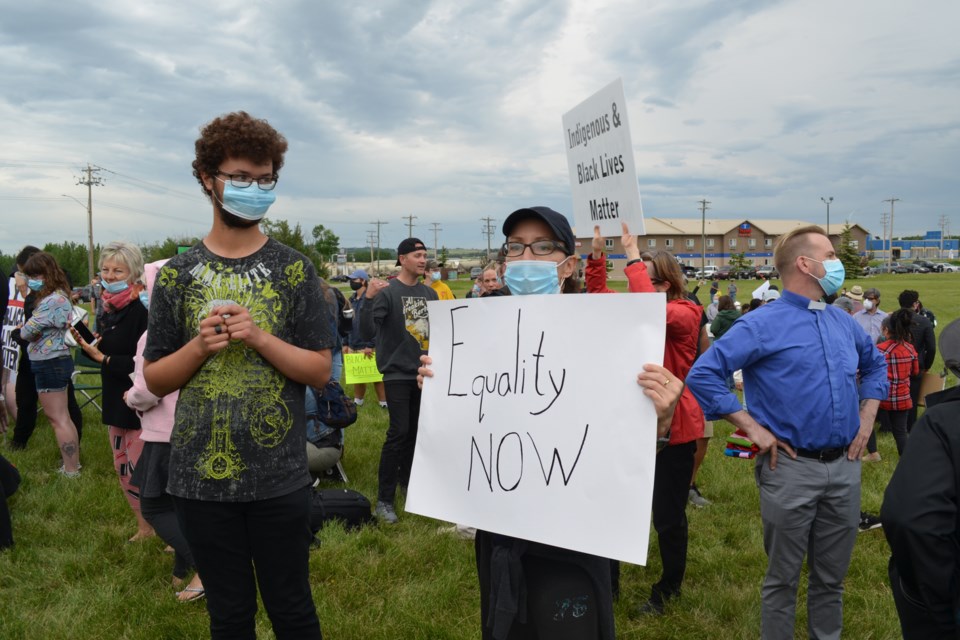 The Town of Innisfail now has a draft anti-racism policy and will be seeking additional public input before town council approves a final version. Dan Singleton/MVP Staff

INNISFAIL – Six days after town council passed a resolution it would combat racism with a new comprehensive policy, administration has already presented a draft plan.

The 10-page policy document, entitled Anti-Racial Discrimination & Anti-Racism Policy, was presented to council at its agenda & priorities meeting on June 15, six days after council’s commitment to have it created.

The document will now be looked at by citizens who have been directly impacted by the issue.

“Right now, I have pulled together a small group of stakeholders in the community for review,” said Todd Becker, the town’s chief administrative officer. He added local citizens have reached out to the town on racism and discrimination.

He said he will seek direction from council whether the policy should receive wider public input. Becker is hoping a final version of the policy will be back to council in early July.

“Council is committed to moving very quickly here. Stay tuned,” said Coun. Don Harrison, who urged council and administration on June 9 to move quickly on a new policy or it would mean “nothing” to citizens concerned about racism issues.

He noted Innisfail, as a rural community that just held a successful anti-racism rally, has an opportunity to be seen as a model for the rest of Alberta in dealing decisively with racism.

"That is what is exciting about this. Innisfail has been sort of shunned for many years and now here is a chance to stand up and let's get after it," said Harrison.

The draft policy lays out the Town of Innisfail’s role and responsibility to protect every person’s right to be free from racial discrimination and racism, with the town committed to respecting and upholding the vision and principles of Alberta’s Human Rights Act.

“The implementation of this policy is a public commitment that the Town of Innisfail will continue to make best efforts to ensure that all who work and interact with the Town of Innisfail are able to do so in an environment and manner free of racism and racial discrimination,” says the draft policy in its statement of principles.

Mayor Jim Romane said the quick response by administration to move on the draft policy is a sign to citizens the town realizes how important the issue is for the community.

“Let’s address it and go to the community with it. We are not done by any means,” said Romane. “We intend to interview residents. People have written us and have made comments and we want to interview them, and really get to the bottom of these so-called systemic racism factors that are supposedly happening. I think it is on a small scale but nevertheless it is not small when it is you who is affected by it.”

Harrison said he’s already considering some ideas that would give the new policy added teeth, specifically an anti-slurring bylaw.

He noted the City of Toronto has language in its bylaw that disallows name calling and racial slurs.

And while the process has just begun, and Harrison is mindful there will be public engagement, the anti-slurring idea is appealing to him as he knows from personal experience that name calling and slurs can be excruciatingly hurtful.

“A lot of it is, name calling, bullying. It is discrimination. It hurts, particularly young children,” said Harrison, adding a bylaw could see an individual or parents being charged for uttering racial slurs. “I think you have to have those tough consequences because really if we don’t where is the accountability?”

Romane said a potential inclusion of an anti-slurring bylaw into the policy would require additional community discussion.

“I don’t know if I would totally endorse it until I had the opportunity to talk to people to see how they honestly feel about it, especially individuals who are affected by it,” said Romane. “I am not jumping up and down right away but I want to hear first of all how often this is happening.”