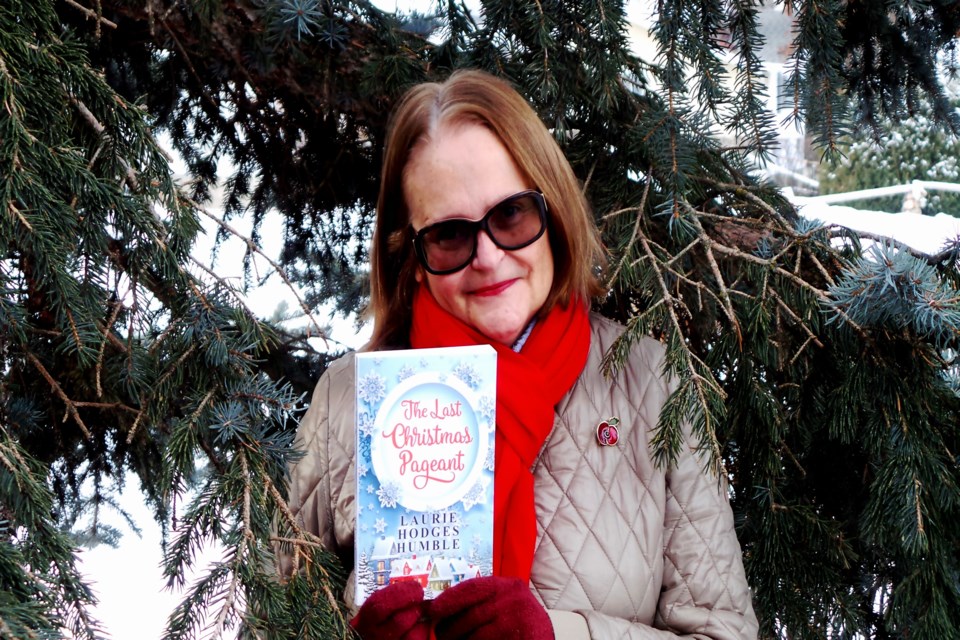 Laurie Hodges Humble with her book, The Last Christmas Pageant, which is a loving salute to the now dissolved Spruce View Ladies Club and the Women's Institute movement. Submitted photo

INNISFAIL – For 66 years, the Spruce View Ladies Club was the beating heart of this rural hamlet 30 kilometres west of Innisfail.

The hard work over the decades by the dozens of committed ladies ensured important community functions and events were organized to perfection, that every single one had enough food, whether it was catered in or prepared by the ladies themselves.

“When we built the new community hall in 1989, club members provided coffee and hot lunches for the workers, and everybody was just so willing to do that,” said Marilyn Marshall, who was born and raised in the Spruce View area and served with the club for more than 30 years.

“We had a tremendous number of volunteers. We could not have done it without that.”

The Spruce View Ladies Club was born in 1948. It was modelled from the Women’s Institute movement, which was founded in Ontario in 1897 with a goal to revitalize crural communities, and later to encourage women to become more involved in producing food during the First World War. But declining membership and changing community interests would ultimately prove too much for the Spruce View Ladies Club, and it dissolved in late 2014.

“It’s just a sign of the times. When I grew up, and even when I first joined the ladies' club, community events were a big thing but there wasn’t all this travelling and all these extracurricular things that there is now,” said Marshall, who has lived in Innisfail for the past five years. “Families can only spread themselves so thin.”

It was just a few years before the club’s demise when Innisfail writer Laurie Hodges Humble accepted a freelance writing assignment from the now defunct Innisfail Province. She was tasked to cover the annual Christmas Concert at the Spruce View Community Hall, a long-held tradition in the hamlet. Humble, a big city girl from Regina, had no idea what to expect.

“That was a major event we did every year. We had candy bags and oranges for the kids and we went to great lengths to create a nice program each year for everybody. It was always well attended,” said Marshall, noting people from outside the community came in to provide the program for the children, with Santa Claus making his grand arrival at the end of the concert.

“He usually got dressed at some secret place in the back of the hall somewhere. And then he arrived and gave the children their candy bags.”

All of this delighted and thrilled Humble.

"It was like being in a Hallmark movie," she said. "When a kid got up there, they clapped, and then Santa came. It was just wonderful.

“There was this community spirit and all these deserts they had,” she added. “It reminded me of when my mom and I in Regina used to go to the Salvation Army Christmas Tea. It was the most Christmassy thing from my childhood that I had experienced.”

Humble wrote her story for the newspaper but was soon inspired to go even further from her rural Christmas concert experience. She joined a playwriting workshop at Red Deer College and re-worked her story for theatre. She also met Sharon Lightbown, the manager of the Dickson Store Museum.

“She liked it so much that it was performed as a fundraiser for the Dickson Store Museum at the Spruce View Community Hall two years in a row,” said Humble. “It was a real local success. People loved it.”

That ultimately led to something even grander, a full 230-page book. In 2019, Humble published her first novel, The Last Christmas Pageant, in e-book format. Two months ago, the book was published in print.

The Last Christmas Pageant is a fictional account of the final days of a small-town women’s club called the Poplar Grove Ladies Club. However, it’s absolutely based from Humble’s moving experience of covering one of the last Christmas concerts hosted by the Spruce View Ladies Club.

Humble’s work is a story about shifting demographics and changing traditions and values impacting quintessential small-town life in Central Alberta.

It’s a story of the diminishing future prospects of the ladies’ club, and the fear its long loving service to the community could come to an end, particularly because younger generations are showing no interest in stepping up. It could mean closing the community hall, the playschool and ending social teas.

But a playschool mother finds a box of children’s rhythm band instruments used in previous Christmas pageants under the hall’s stage. There is hope but also resistance and high emotions, leaving a big question of whether there will be one more Christmas concert to host.

Most importantly, however, The Last Christmas Pageant is a loving salute for all rural women’s clubs and the role each one played in shaping the community they served.

“Someone who read it, and she is very intelligent and a journalist, said to me, ‘This just isn’t a Christmas story, this is a homage to the Women’s Institute,” said Humble, adding there is a more practical, albeit loving, reason as well.

“It’s important because people are missing their kids’ concerts. They are missing the family and the community getting together, and this book ends in a children’s concert, and includes adults and families.”