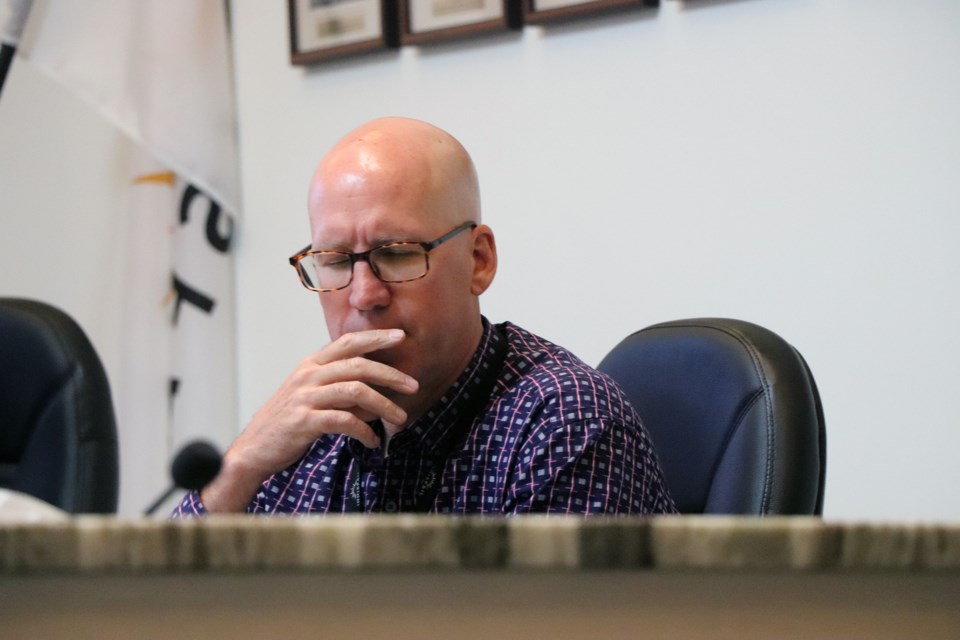 Todd Becker, the town's chief administrative officer, said he will try to get to the bottom of concerns raised by the Innisfail & District Chamber of Commerce about communications issues the latter says has recently surfaced with the town. Johnnie Bachusky/MVP Staff

INNISFAIL – Town council was told last week the Innisfail & District Chamber of Commerce is facing “challenges” with its relationship with the town and is seeking better communication.

“We seem to have some communication breakdowns between the town and the chamber,” said Carla Gabert, the chamber’s manager, who also said seconds before she appreciated the work she does with Stuart Fullarton, the town’s manager of economic development and communications. “Not everything gets translated to us at the chamber. We really want to help the town.”

She cited examples such as cross-marketing for Canada Day activities, including the fireworks. “We still had it posted that we were going to have fireworks but it had already been delayed until July 4,” said Gabert. “It’s just little things like that. If there is a way that we could partner up a little bit more on those we would appreciate it.”

Gabert made her verbal presentation to council immediately following a shorter one by chamber president Larrie Davis at council’s July 13 regular meeting.

Davis also said it was recently suggested at a chamber meeting that it would be beneficial if the town sent a staff member to sit in on chamber meetings.

The candor from the two high-ranking chamber members appeared to catch council members and staff by surprise, with mayor Jim Romane wondering why Gabert said positive things about her relationship with Fullarton but added there were communication problems with the town.

“It’s things that aren’t in his (Fullarton) department necessarily,” Gabert responded, adding the chamber found out just that morning (July 13) that Doug Griffiths, president of 13 Ways Inc., might be meeting with the chamber but “we had no idea.”

“Things like that, just little things (that) seemed to get dropped,” she said. “So if there is a way to just improve that communication skill we would really appreciate it on the chamber because it was a surprise to the whole board today, including myself.

“I don’t know where the communication breakdown is but we would sure like to do what we can to get it fixed,” Gabert added.

Todd Becker, the town’s CAO, said depending on the issue the chamber needs to have addressed, he and Fullarton are always available to guide Gabert or any chamber official to the right town official who can provide them with the right information.

“Stuart or I would gladly point you in the right direction but Stuart and I will not answer all the questions. It will be, ‘you need to contact this individual,” said Becker. “We take pride in the availability and openness to help and to guide.”

Romane said his read on the communication breakdown problem was that it was over “short-term” issues, and not ones involving long-term planning, such as the annual trade fair.

“Like the fireworks situation. That was a last minute call because of the storm,” noted Romane. “There was not much choice there. I can see how some of the short-term communications might fall short.”

Following the urging of Carritt, Davis said the chamber would prepare a list of what the chamber’s responsibilities are, as well as their expectations of town staff.

Becker said his office is taking the chamber’s concerns seriously and will wait for further information.

“They raised a little bit of concern obviously with communications coming from town administration so I would like to talk to the (chamber) board about that,” said Becker, adding he’s hoping to receive more detailed information from the chamber. “If they feel there is a communication breakdown I want to know exactly what that is.”