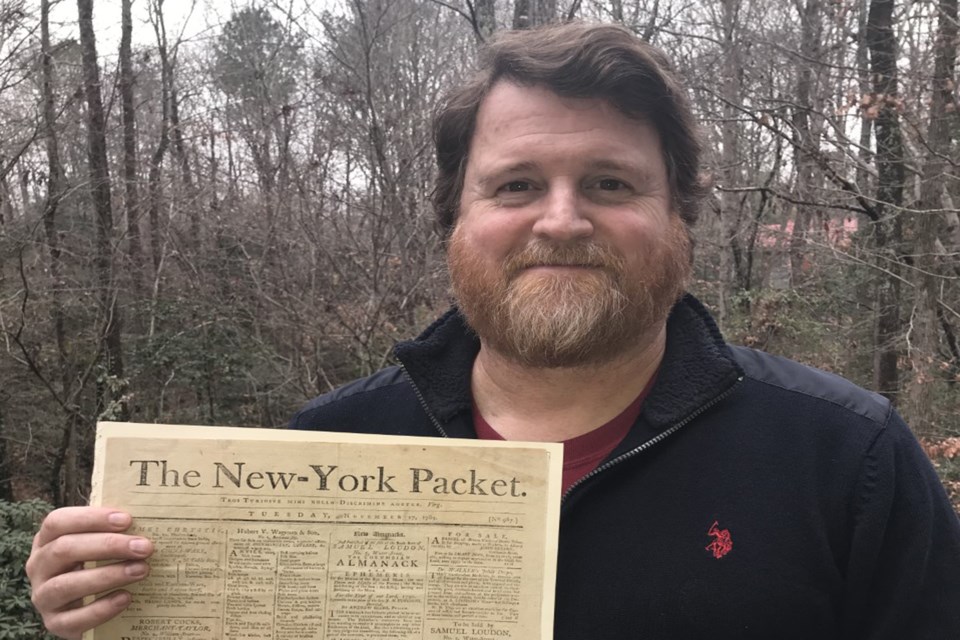 John Pointer with his recently acquired copy of The New-York Packet from Nov. 17, 1789.

Eighteen months ago this scribbler completed a three-year mission with a Winnipeg cousin to properly mark the life of an infant uncle who was forgotten for almost a century.

These stories are important on many levels, primarily because they are reminders that every life lived has its own unique tale, message or lesson to pass on. Stories of the distant past can bring hope and inspiration for many in the present and future, as well as for their communities, and even entire countries.

In early December I received a fascinating message from a friend in North Carolina. John Pointer, a 49-year-old high school teacher of world history, has been working on a family genealogy project for the past 20 years. He recently came across historically significant information about his sixth-generation grandfather Samuel Loudon from the days of the American Revolution.

“I’ve known about Samuel for a while but didn’t learn about his occupation until I started studying the history of New York during that time period,” said Pointer, a resident of Clayton, N.C., a town 29 kilometres southeast of Raleigh, the state’s capital city. “I came across the name of the newspaper and one thing led to another.”

Loudon, a native of Scotland, arrived in America in 1753 and opened a general store in New York City. Several years later he started a bookstore that eventually included a printing press. This led to the launching of The New-York Packet newspaper in January, 1776, six months before the Declaration of Independence was declared on July 4, 1776. “He had to be careful with the tone of the paper as the citizens of New York were divided between being loyal to King George III of England and supporting independence,” said Pointer. “He didn’t want to alienate either potential subscriber. Eventually though, Samuel’s paper grew more supportive of independence.”

Meanwhile, the Revolutionary War was raging. New York City was evacuated in September of 1776. Loudon went 83 kilometres north to Fishkill where he became the official state printer and postmaster for the state’s only post office.

A year later the exiled Loudon printed the state’s first 2,090 copies of its new constitution.

As for The New-York Packet, it continued to publish but only intermittently for the next seven years. Following the end of the Revolutionary War in 1783, Loudon returned to the city and regular publication resumed. In fact, the Packet became one of five publications to publish the Federalist Papers, a collection of 85 articles and essays written in 1787 and 1788 by a group of American founding fathers to promote the ratification of a new U.S. constitution, which came into force on March 4, 1789.

Pointer recently purchased an original copy of The New-York Packet from Nov. 17, 1789. He wants to gift it to his father, and tell him the marvelous story behind it.

“The paper came full circle. I plan to frame it,” said Pointer. “I’ve been toying with the idea of writing some of the more interesting history down and self-publishing it for family numbers.”