Bringing in 2020 at the Innisfail library 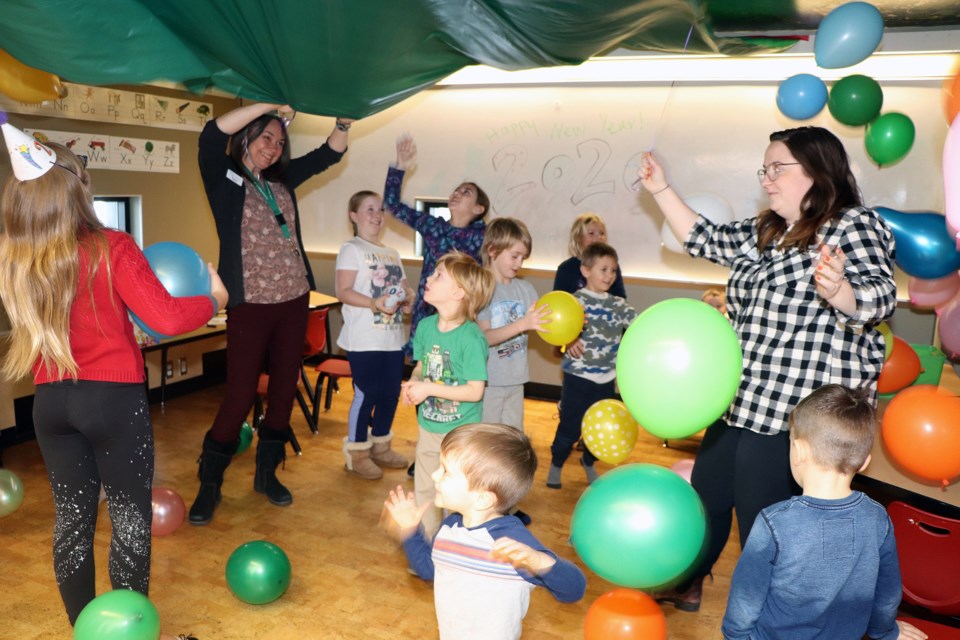 INNISFAIL – With falling balloons and a 2019 countdown, there was a chorus of giggles and laughter from an enthusiastic group of Innisfailians to start 2020 early on Dec. 31.

But that was just fine with everyone who attended the third annual New Year’s Eve party at the Innisfail Public Library.

“This is an awesome place to come to with the events they put on. It’s always great to have something like this in town,” said Dean Turnquist, who attended his first library New Year’s Eve party with his four-year-old son Finn, who enthusiastically played at the elevated train set display at the top of a bookshelf. “Finn is old enough now, having just turned four, so we thought we’d come to check it out. Whenever there is a train it’s pretty easy to entertain him.”

There were another dozen or more young children who discovered and enjoyed many games and crafts at the free drop-in event, which began at noon and continued until 2 p.m.

Lindsey Budd, assistant library manager, said the event is targeted for adults and kids who can be together to celebrate the new year during a reasonable time of the day.

“And it’s free too,” she said. “A lot of times many events cost money as well, so it’s family friendly and it’s free for anyone in Innisfail.”

She noted the scheduling of the event posed a challenge because New Year’s Eve and New Year’s Day fell during mid-week on a Tuesday and Wednesday, the same situation as Christmas Eve and Christmas.

“It was really awkward in general because you don’t connect them to either of the weekends,” she said.

But Innisfailians came anyway, and because the event is a proven success the event’s agenda did not change.

“I think it really works well with families. The more we get it out there, the more people will attend,” said library manager Tara Downs, noting the local library is cost-effective compared to many out-of-town family-oriented programs, which are often costly, even to simply get there. “If you keep your programs consistent, especially when it comes to families, I think the attendance will increase.”

In the meantime, the library is promising to continue its commitment to put on more family-based activities.

“Especially on weekends so that the whole family can come out and do something together,” said Budd. “And it’s free, and it’s fun.”

She said the library is stepping up new programming in 2020, including a baby program called Budding Bookworms for babies 18 months old and younger, a music and movement class on Fridays, as well as new after-school programming.