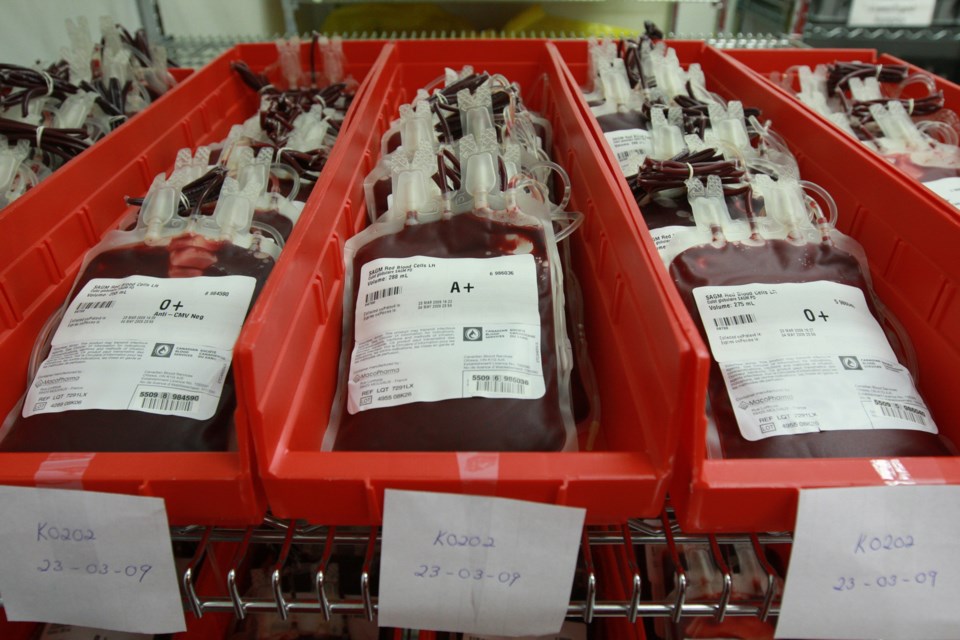 The number of blood donor clinics in Innisfail has seen a steady decrease in recent years, from up to six several years ago, to three in 2018 and two in 2019 and 2020. File photo

INNISFAIL – If you are a regular blood donor, you won’t be donating as often in Innisfail.

That’s because Canadian Blood Services (CBS) has decreased the number of clinics here from five or six per year several years ago, to three in 2018 and two in 2019 and 2020.

“We did make some adjustments to how often we visit, particularly in the smaller towns like Innisfail,” said Jennifer Gretzan, CBS associate director of donor relations for Alberta.

“Just because we want to ensure that when we are there, the whole donor-based population is eligible to donate blood.”

The decrease in blood donor clinics is the result of a combination of factors, and that includes cost savings for all rural donor centres, not just Innisfail, noted Gretzan.

“Because we are a publicly funded organization, we need to ensure we’re being fiscally responsible with our funds that we do get from our funders,” explained Gretzan, noting they do regularly re-evaluate their collection plan to ensure they are meeting demand for blood and staying fiscally sound.

“We look at how many units of blood we would be able to get out of certain towns and balancing that with the cost feasibility of attending those towns for a blood donation,” she said.

“Even though over the years because of some of the eligibility changes, we have reduced the number of mobile donor centres in Innisfail. That hasn’t impacted our ability to meet those hospital demands for the patients that need it,” said Gretzan.

Danny Rieberger, an Innisfail town councillor, has donated blood on a regular basis for more than 30 years and is a little concerned with the decrease in the number of clinics.

“They have cut back on the frequency a lot,” said Rieberger. “They used to come here five or six times a year and now they’re coming twice a year.

“I’ve given blood over 80 times and it’s always been in Innisfail,” he added, noting the reason he gives blood regularly.

“In 1981 when our twins were born one had complete blood transfusions and one had partial transfusions,” said Rieberger. “So I wanted to pay back (and give blood). That’s why I want to keep doing it.”

Gretzan added that a change in the eligibility criteria for women is another reason for the decrease in the frequency of blood clinics.

Changes for female blood donors came into effect in December of 2016, which impacted the number of times women can give blood in a year.

Men can still give blood every 56 days, but women can now only do so every 84 days.

“It has to do with their iron stores because women lose iron throughout their monthly cycle,” said Gretzan. “One of the paramounts for Canadian Blood Services is the health and safety of our donors, so we want to make sure that female donors have that time to ensure their iron stores aren’t being depleted by donating blood. That’s why females are (now) on an 84-day eligibility interval.”

Innisfail’s next blood donor clinic is at the Innisfail Library/Learning Centre on Sept. 14.

Pull Quote: "We look at how many units of blood we would be able to get out of certain towns and balancing that with the cost feasibility of attending those towns for a blood donation." Jennifer Gretzan, CBS associate director of donor relations for Alberta