Hopes of the Allan Cup tourney coming to Alberta in 2017 have been dashed. The Innisfail Eagles hockey club was notified last week that Alberta was not successful in its bid to host the annual nationwide senior men's AAA hockey tournament.
Feb 9, 2016 12:00 AM By: Kristine Jean 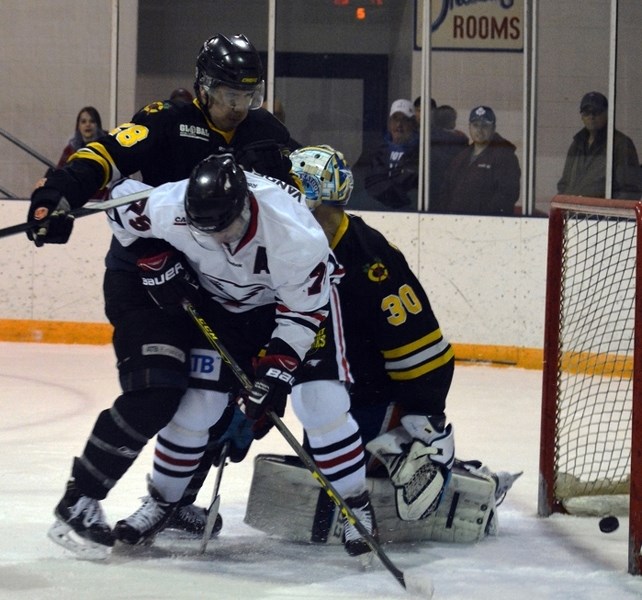 Innisfail Eagles forward Pete Vandermeer battles in front of the net as the puck crosses the goal-line during the last home game of the regular season against the Fort Saskatchewan Chiefs Feb. 5. The birds won the contest 6-2 and wrapped up the regular season with a close 3-2 loss to the Stony Plain Eagles on Feb. 6

Hopes of the Allan Cup tourney coming to Alberta in 2017 have been dashed.

The Innisfail Eagles hockey club was notified last week that Alberta was not successful in its bid to host the annual nationwide senior men's AAA hockey tournament.

An email received from Hockey Alberta on Wednesday (Feb. 3) stated New Brunswick had won the bid. It is a recommendation from senior council that will be brought forward at Hockey Canada's board of directors meeting later this month for a final vote.

“We didn't have our hopes really high. It's out of your control,” said Vern Loughlean, assistant general manager with the Innisfail Eagles. “Hockey Canada is the governing body. It depends on what they decide.”

The original host for the event was Kenora, Ont., but it was recently announced the Kenora Thistles hockey club ceased operations and folded on Jan. 10. With that news, AAA senior men's hockey clubs in provinces across the country began considering options as a possible replacement location for the 2017 Allan Cup.

A total of four provinces expressed interest in hosting the event, including Newfoundland and Labrador, New Brunswick, Ontario and Alberta.

Despite the missed opportunity in 2017, there is still hope the Innisfail Eagles may host the Allan Cup tournament in the near future.

“By all means we will bid on it,” Loughlean said of future tournaments. “I would think it would (come to Alberta in 2018). It was in Newfoundland last year, in Manitoba this year and now in New Brunswick next year. I would think it should be coming this way in 2018.”

The Innisfail Eagles have never made it to the Allan Cup in their 69-year history. They have been to the McKenzie Cup, a tournament between British Columbia and Alberta to decide the club that represents the Pacific region in the Allan Cup tournament.

However, this year is different because British Columbia has no AAA senior men's hockey team, and no McKenzie Cup will be awarded. That leaves the winner of Alberta's Chinook Hockey League to move on to the Allan Cup.

“If Innisfail wins the two (playoff) series, they will be going to Manitoba (and the 2016 Allan Cup tournament),” said Loughlean. “That's our goal right now is to go to the Allan Cup this year.”

The Birds will face the Bentley Generals in the first round of playoffs, which begins on Feb. 12 at home in Innisfail. Puck drops at 8:30 p.m.

Innisfail council agrees to hear pilot pet chicken plan
Nov 28, 2020 3:00 PM
Comments
We welcome your feedback and encourage you to share your thoughts. We ask that you be respectful of others and their points of view, refrain from personal attacks and stay on topic. To learn about our commenting policies and how we moderate, please read our Community Guidelines.