Birds and Merchants battle at the curling rink 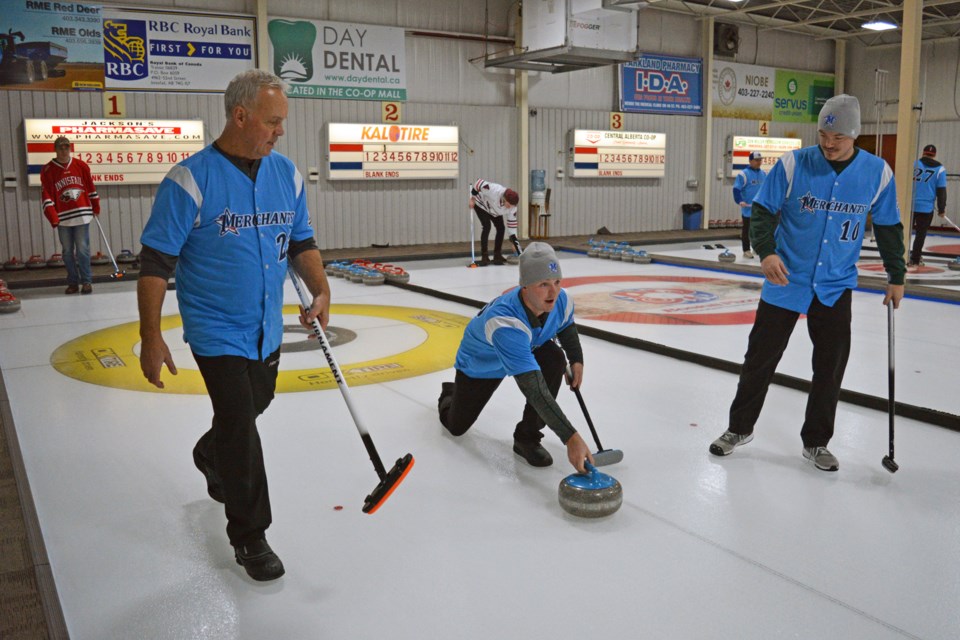 INNISFAIL – Curling is not normally a sport that hockey players or baseball players excel at, but the Innisfail Eagles and Innisfail Merchants recently proved otherwise.

The two local sports teams joined forces for a curling fundraiser at the Innisfail Curling Club on Nov. 15.

“The guys got together to have a little bit of fun and raise some money for junior curling,” said Ryan Dodd, Eagles general manager. “It’s good to get out for some friendly competition between the (local) baseball team and the hockey team.”

Several new and veteran Eagles players teamed up for the fundraiser.

“Unfortunately, they wouldn’t let us wear our skates but we’re going to make it a full contact game anyway,” he added with a chuckle.

The Innisfail Merchants were not going to let the Eagles beat them to the punch, noted Desmond Bouteiller, Merchants general manager.

“We’re built for speed anyway so we’re good that way. They’ll miss us,” said Bouteiller with a smile.

On a more serious note, he said about a dozen Merchants players came out to participate in the fundraiser and support an Innisfail sports program.

“We’ve got a lot of alumni here and we’ve got some board members,” said Bouteiller. “It’s good to be able to give back to other groups too. Any way we can help out some of these other activities, it helps the community and that’s what we’re all about,” he added.

Alison Dubray is a board member with the Innisfail Curling Club and helped coordinate the event.

“This is our first time hosting the Eagles and Merchants for this fundraiser,” said Dubray. “It’s (about) camaraderie and community.

“We wanted to support our junior curling program. They are the (future) curlers who will sustain and help keep our curling club alive,” explained Dubray. “It’s a fantastic way for the Merchants to end their season and for the Eagles to start their season.

“For our first year it’s a fantastic turnout,” she added.

The junior curling program teaches kids how to curl and is held every Monday and Wednesday at the Innisfail Curling Club, noted Dubray.

Dubray said there are also two junior teams that are curling in the men's and ladies' leagues this year.

She said she appreciates the support from local sports teams, and hopes to continue the fundraiser in the future.

“Hopefully we’ll have a second annual fundraiser and one of these teams will have bragging rights for next year,” Dubray concluded.