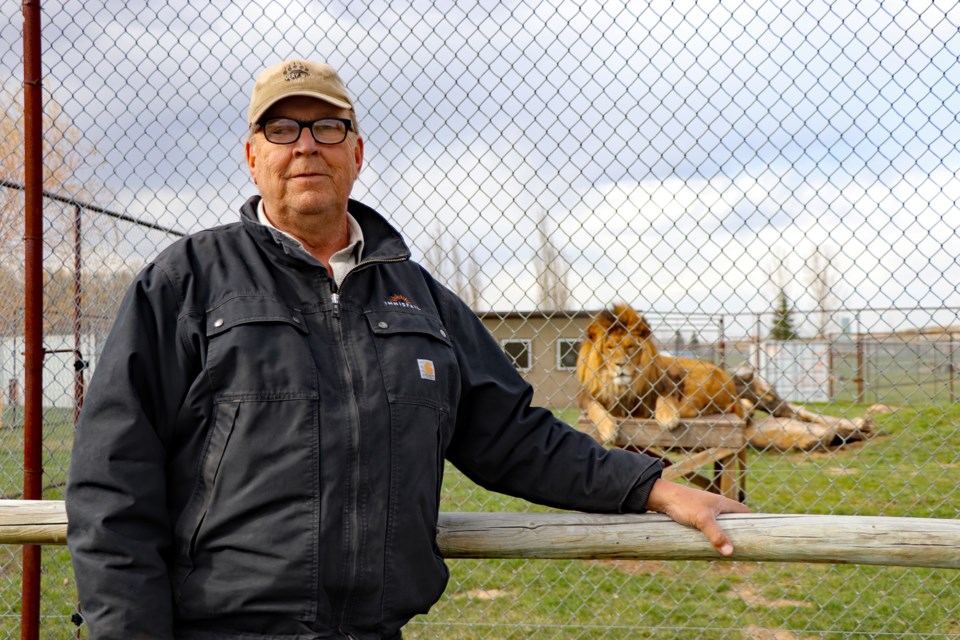 Doug Bos, co-owner of Discovery Wildlife Park, said this year's unique drive-thru experience option for visitors to the zoo could be the right solution for his business to navigate its way through the trials of the COVID-19 pandemic. Johnnie Bachusky/MVP Staff

INNISFAIL – Doug Bos has figured out the math.

He needs at least 333 vehicles driving into his zoo for each of the 120 days this season.

In this desperate unprecedented year of the COVID-19 pandemic, achieving this goal could save the season, not to mention his beloved Discovery Wildlife Park, which he has nurtured for 30 years in both Innisfail and Clive.

And his plan must work with greatly reduced hours of operation, from noon until 4 p.m. seven days a week, and with reduced staff, from 25 last year to just 10 this season.

But Bos believes it is well worth the shot. His zoo became the first in Canada to open on May 9 and 10 during the COVID-19 pandemic.

But there is no walking allowed. It’s called the Discovery Wildlife Park COVID drive-thru experience where the public is invited to drive along a meticulously prepared mile and quarter route to view all the animals as many times as they want.

Bos said there is one single overarching reason for introducing this new initiative.

“Desperation,” he said with a chuckle. “The governments, the feds and province, were great coming out with their incentives but those are only short-term fixes. If we weren’t able to open, we would end up going 19 months from last October to next May without any income.

“I don’t think (there's) any business that can go for 19 months paying wages and operating expenses without having any income,” said Bos.

He said the idea came after a recent staff meeting when a number of ideas were put on the table. But only one, the drive-thru, appeared to have potential to generate enough income to save the season. It’s not a new idea as there are a number of drive-thru zoo operations in Canada, including ones in Niagara Fall and Toronto, but Innisfail’s is the first one in the country to open during the pandemic.

To get his zoo opened as a drive-thru there was a lot of work ahead for himself and reduced staff. They made it work by preparing and using areas of the zoo that were never previously open to the public.

“We had to do lots of alterations, and build some roads,” he said.

And then there was also extensive, speedy and successful negotiations with Alberta Health Services (AHS) officials to make sure all COVID-19 guidelines and preventative measures were in place, including having a zookeeper in four separate locations in the park to ensure public safety and that all COVID rules are followed.

When all was said and done Bos was quick to say that AHS was “really, really good” to work with, and an agreement was hammered out quickly.

“AHS wants businesses to write out a proposal, and then they look at that proposal to see if it makes sense. They don’t want to have to make a proposal for a business because they don’t know how a business operates, and they were really, really good,” said Bos.

“We wrote out a proposal, sent it in Monday last week and they were here on Friday and approved it.”

With that agreement in place, Bos and staff unveiled the Discovery Wildlife Park COVID drive-thru experience. The mile-and-a-quarter-long route begins on what is known as Chore Road, formerly off limits to the public for feeding and watering animals.

After visitors pay their $20 fee (just $10 if they are alone) they slowly drive 10 kilometres per hour, first on the east side of the park parallel to the train tracks alongside the fenced-in animal enclosures. This leads visitors to the park’s northern section, the site of the new 63-stall campground. Chore Road then swings west and then south. Along the way, exotic animals are behind a fence to greet visitors, including big cats, bears, camels, deer, reindeer, elk, and llamas.

On the recently passed first weekend, the drive-thru attracted a total of about 250 cars, which he considers an excellent start, despite cool weather.

“I was pleased because we can’t be open when it’s raining. The road gets bad and we can’t let the public on it,” he said, adding the following Monday and Tuesday turnouts went surprisingly well. “We got 52 yesterday and I think we are at 65 today, and they are coming from Edmonton and Calgary.”

“The animals like it. They really enjoy seeing the people back again. They miss people,” said Bos. “People have a hard time believing that but they really do.”

Chinook's Edge School Division plans to have masks for all staff
Aug 4, 2020 9:00 AM
Comments
We welcome your feedback and encourage you to share your thoughts. We ask that you be respectful of others and their points of view, refrain from personal attacks and stay on topic. To learn about our commenting policies and how we moderate, please read our Community Guidelines.