Battling the blues at Bluebird Motel 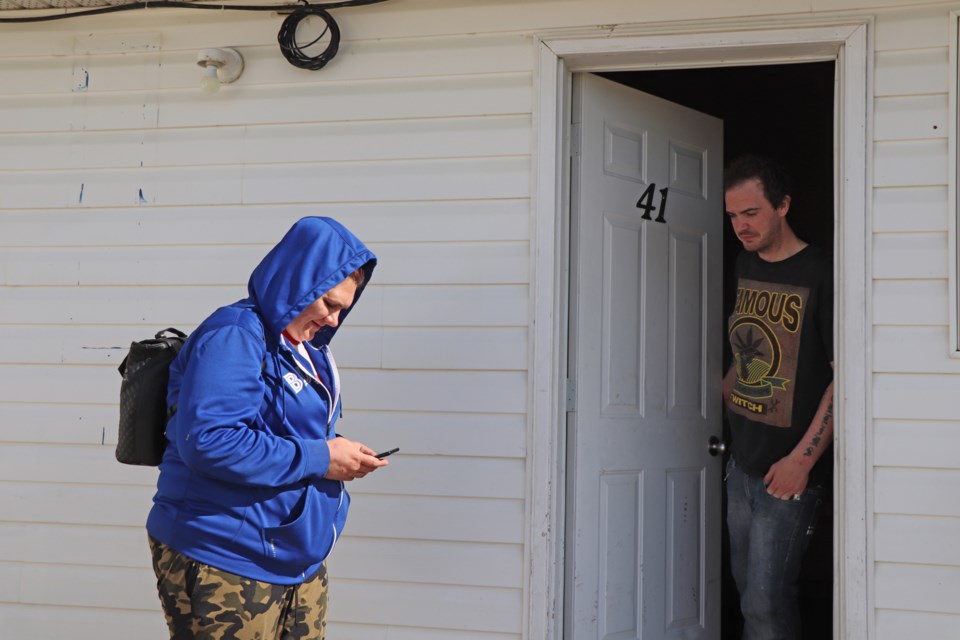 Lacey Sabourin (left) checks her cell phone and partner Nick Collins peeks out of the door of their suite at the Blubird Motel in Innisfail where they have been living for the past month. The couple like the quietness of the motel but know local RCMP are keeping a watchful eye. Johnnie Bachusky/MVP Staff

INNISFAIL – Ian Dempster came to the Bluebird Motel for a visit last week with his dog Shilo.

The 27-year-old Sylvan Lake man wanted to check up on struggling friends staying at the motel for the past month.

Just five days earlier the police brought Dempster to the motel after a bad fight with his girlfriend.

“The cops thought it best because I was really emotional. It was the only place I could go,” said Dempster, aware the motel is not immune to violence. “I have witnessed violence here not long ago. The cops came and I didn’t know what was going on.”

The Innisfail RCMP are fully aware of the violence and escalating criminal activity happening at the Bluebird Motel, a half century old east side business close to the southbound lanes of the QEII. The motel has 50 relatively cheap rooms to service a wide range of guests, many from the lowest and most desperate fringes of society.

The RCMP has targeted the Bluebird as a place for widespread illicit drug use, excessive alcohol consumption, prostitution and multiple sudden deaths. The motel last made headlines on April 29th as the location for the homicide of a 38-year-old man. RCMP is still probing the case.

The Town of Innisfail also wants proactive measures put in place to blunt the escalating troubles.

During a recent town council meeting Mayor Jim Romane even wanted to know if the time was right to have Alberta Health officials inspect the Bluebird to determine whether it’s still a viable place to leave standing.

“Just last week we had people with a child move in and they found a sawed off shotgun in the room in a backpack,” said Innisfail RCMP Sgt. Lori Eiler. “So, I don’t think the rooms are being cleaned well.”

On June 9, Eiler gave a sobering and chilling verbal report to town council about the increasing number of calls for service (CFS) for the Bluebird Motel.

She said calls from the Bluebird are three to 16 times higher than ones from all other local hospitality businesses. Last year, Mounties responded to 95 calls for service from the Bluebird, nearly three times ahead of the Innisfail Hotel that had 33. The Super 8 had the lowest with six.

“Suspicious deaths or sudden deaths, of which most of them have resulted from drug overdoses,” said Eiler of the Bluebird’s CFS, which include assaults, mental health-related complaints, stolen property and mischief.

“We have addiction issues that are predominant there, and we have had lots of instances of prostitution where we have got prostitutes coming out from Calgary or Red Deer and sometimes Edmonton and booking a room for a couple of days.

“Unfortunately what that brings is a lot of bad actors to town that are participating in those kinds of activities,” she added. “It’s pretty clear what the issues are there in regards to the policing resources that one establishment is eating up.”

Council was told not many Innisfailians are staying at the Bluebird but it’s popular with many “prolific property crime” individuals from Red Deer. They are coming for the motel’s affordable housing and for the convenience of not having to provide identification or a credit card.

“It’s becoming an increasing issue for us, the level of violence, the firearms we are hauling out of there, the drug use and the calls for service are very concerning,” said Eiler. “We have stepped up our game considerably to try and curb some of that behavior but it’s very transient in nature.

“Once we get to know somebody is there eventually they move on and somebody comes to take their place,” she said, adding she has met with town staff to think about solutions other than police enforcement.

“I think with a lot of these issues we are never going to arrest our way out of them,” said Eiler, adding police presence and pressure will be maintained at the Bluebird. “We don’t want to see people in our community victimized.”

Since the June 9th council meeting, the town has contacted the motel’s two Calgary co-owners. A meeting was scheduled for June 28 in Innisfail.

Todd Becker, the town’s CAO, said the goal of the meeting was to get a better understanding on what is happening at the Bluebird and outline to the owners the amount of local resources that have been used to “support” the motel’s clientele.

“What I am looking for is to ensure that understanding is received by the owner,” said Becker.

Bluebird co-owner Vas Shetty said last week he and partner Veera Murthy were willing to listen and find solutions to the ongoing problems.

“Our main concern is community safety,” he said, adding that when they took over the motel in 2016 they “eliminated” many issues. Shetty said all guests must provide identification before a room was granted, and staff must call police if they see any suspicious activity.

“We will be more proactive, that is for sure,” he said.

However, Shetty added that with the COVID-19 outbreak since last March owners had to maintain a “distance” from guests.

“Lately, some people, like drug addicts, might be there. Most of them we kick off there,” he said.

Shetty said he and his partner are willing to make even more changes to satisfy the town and RCMP.

“At the end of the day we need the police. We will work as a team. This is our bottom line,” he said.

In the meantime, the motel continues to operate. Last week, Lacey Sabourin, a 34-year-old resident at the motel, was up early to see her visiting friends. Sabourin said she likes the quietness of the Bluebird.

Her partner Nick Collins said he likes it because they’re able to keep to themselves without being hassled. However, near the highway there are signs all might not be so quiet for much longer.

“The cops sit around here by the highway,” said Collins. “They are definitely keeping an eye on the place.”

Innisfail's Terry Fox Run ‘strange’ but still successful
Oct 20, 2020 9:00 AM
Comments
We welcome your feedback and encourage you to share your thoughts. We ask that you be respectful of others and their points of view, refrain from personal attacks and stay on topic. To learn about our commenting policies and how we moderate, please read our Community Guidelines.