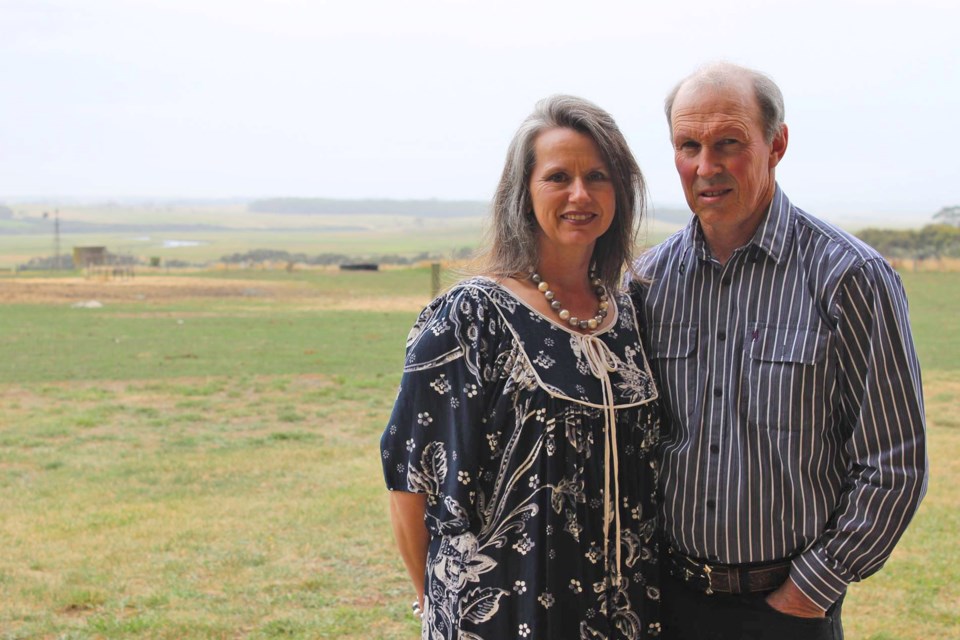 Former Spruce View resident Jessica Fullerton, left, is seen here with her husband on their farm in Australia. Facebook photo

INNISFAIL – As the world watches the horror and destruction of wildfires ravaging much of Australia, a local family from Spruce View is praying for a loved one from the other side of the world.

The wildfires that have been spreading across the country for several weeks are believed to be the worst in Australia’s history. More than a dozen people have died, hundreds of homes have been destroyed, along with devastation to millions of acres.

Jessica Fullerton grew up in Spruce View and is currently living with her family in Victoria, a province in the southeastern part of Australia.

Fullerton, her husband and children, live on a farm near Warrnambool, about 260 kilometres southwest of Melbourne.

They moved to Australia about 14 and a half years ago, where they are dairy farmers.

Here back at home in Spruce View, family members, including her mother, brother and sister-in-law, are keeping a close eye on the situation that continues to worsen.

"I messaged my nephew, my niece and Jessica a few days ago because another family member was anxious about it,” said Shauna Mundell, Fullerton's sister-in-law..

She read a recent message she received from Fullerton.

“Jessica says that most of the horror is in New South Wales and south Australia. However, there are fires in Victoria now where they live but none out of control near them,” said Mundell.

“We’ve been concerned about their safety, if those wildfires get any closer to where they are and out of control near where they are,” she added. “It’s an awful situation for the whole country obviously, for people, their livelihoods, their homes, and their animals. It’s awful to watch that happen.”

Mundell said her nephew told her at the time they are about a 10-hour drive southwest of the worst fires.

“So there’s nothing out of control near them at the moment,” she said, noting Fullerton hasn’t said anything about an evacuation, but has relayed details about the current situation.

“She hasn’t said anything to me about that (evacuating), just that it’s very hot in the 40‘s, and there’s lots of power outages, which shuts off the air conditioning and the fans,” said Mundell.

“I sent her another message (Jan. 3) because the map had changed a little bit and it looked a little closer to their area but I haven’t heard from her since.”

Mundell said the family in Spruce View have been in contact regularly in recent weeks and will continue to do so, especially as the situation worsens.

“Since about a week ago, is when we started asking about the fires,” said Mundell. “That’s when the fires started rolling down to their direction more, closer to them.”

There was another deployment of fire specialists from Alberta that left for Australia on Jan. 4.

“I think it’s wonderful that we have the opportunity to send help to another Commonwealth country like that, or any country really that needs our help,” said Mundell. ”We’re praying for the safety of those firefighters that are from Australia but also the ones that are sent from over here that are volunteering their time over the holidays, to keep them safe and get things under control there.”