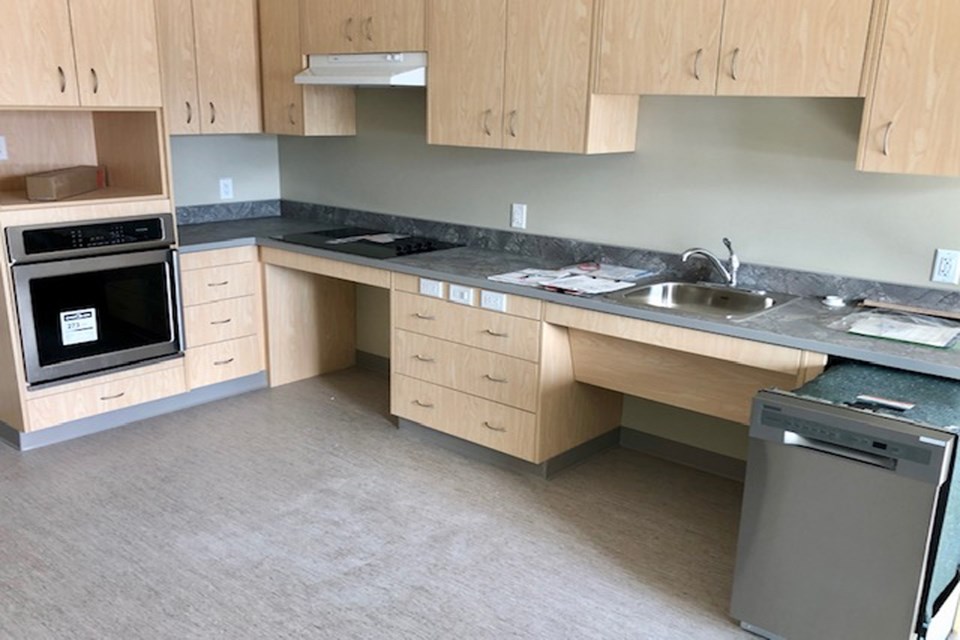 Kitchen of a suite at Innisfail's new Autumn Grove home for seniors that is scheduled to be officially opened this summer. Submitted photo

Parkland Foundation board of directors held its regular meeting in recent weeks and announced that construction of the $24.2 million facility in Innisfail was 95 per cent done and will be fully finished in June.

“I am very happy and humbled. It has been a long journey, very much so since 2013,” said Connie Huelsman, board chair of the Parkland Foundation, who noted the interior of the facility is especially “bright and sunny. “It is an amazing thing and I am very humbled for the folks who will enjoy it. I am very pleased with what we got to this point.

“The only thing not on there is the fascia, and all of that black rock is just lovely,” added Huelsman. “I actually drove by there the day before the board meeting and I had to go to town to take a look.”

Due to the uncertainty caused by COVID-19 exact dates for when residents can move into the new facility, as well as the hosting of a grand opening, cannot yet be nailed down. However, it’s hoped by Parkland Foundation officials that both can happen during the summer months.

“There will be a grand opening for sure,” she said.

Innisfail councillor Jean Barclay, who is town council’s representative on the board, said it will be “an exciting day” for residents at the current aging Autumn Glen facility when they will finally be able to move into their new Autumn Grove home.

“It will be a very proud day for Innisfail and area when it happens,” said Barclay. “We will need to see what transpires with COVID and how that could impact the logistics of the move.”

Penhold mayor Mike Yargeau, who is vice-chair of the Parkland Foundation board, echoed the positive sentiments of both Huelsman and Barclay, and was also pleased the project appears to be on budget.

“As far as we know it is on budget but the province took over that part of it as well,” said Yargeau. “The portion that we are responsible for, the furniture and all that, will be on budget as far as our budget goes. The $24 million to build the facility is the province’s bill.”

The new Autumn Grove will be an ultra-modern replacement for both Autumn Glen and Popular Grove Court, the former a 59-year-old, 62-room assisted living facility, while the latter had 16 self-contained units. Both became increasingly inadequate for both staff and residents.

The new home for seniors will be a glitzy three-storey, 74,000-square-foot integrated independent and supportive living facility on the southwest corner of the current 5.74-acre property. The new Autumn Grove facility will have 60 lodge units to replace Autumn Glen’s existing spaces, as well as 30 self-contained units that will replace the existing ones at Poplar Grove Court and add another 14.

Once all seniors have moved into their new Autumn Grove home the process will begin for the demolition of both Autumn Glen and Poplar Grove Court.

‘He did it to himself,' says Innisfail mayor about code of conduct breaches
Mar 2, 2021 9:00 AM
Comments