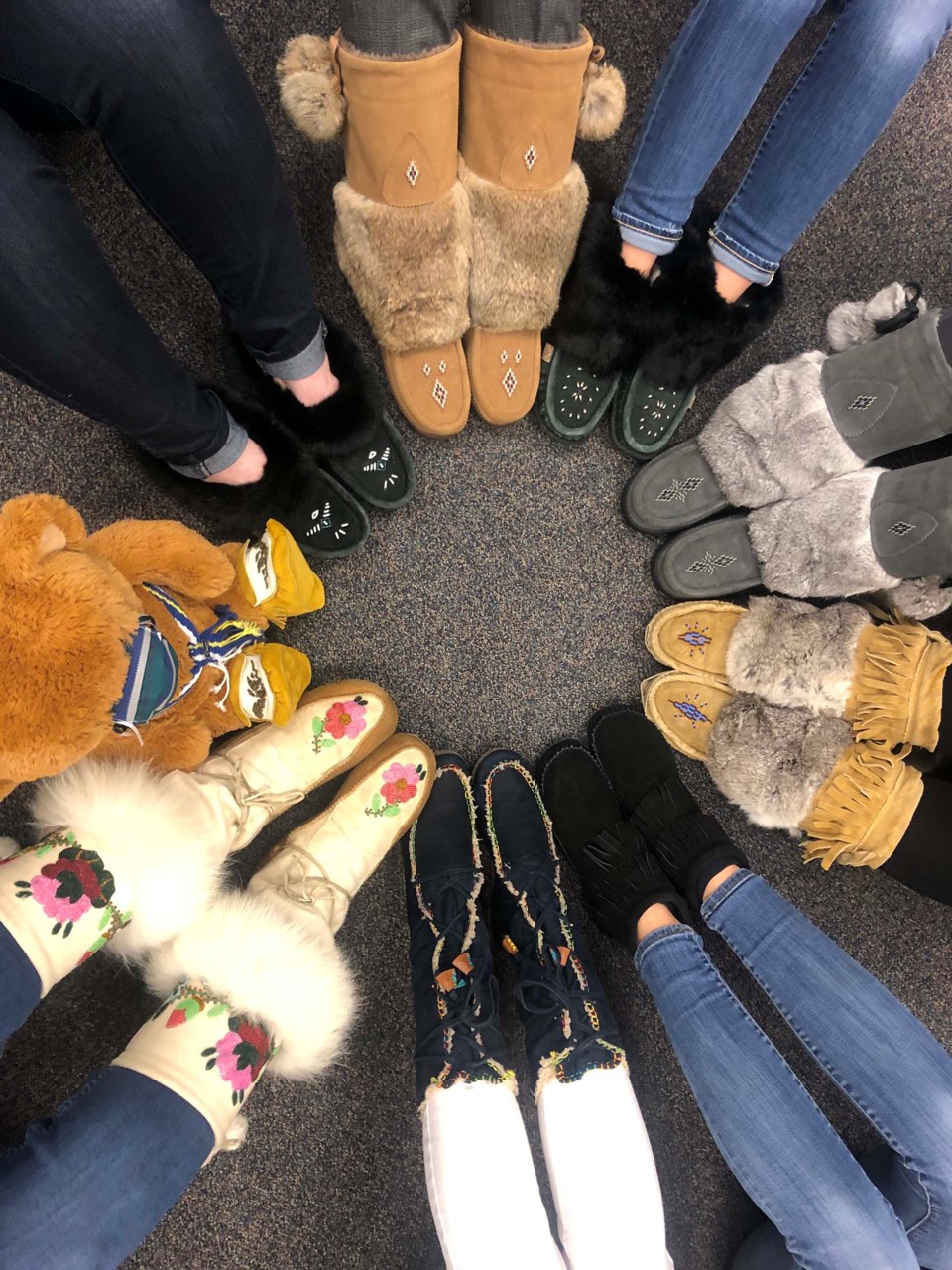 St. Albert residents were rocking their moccasins this week as part of an international campaign to take pride in Indigenous culture.

Nov. 15 to 21 was Rock Your Mocs week in North America. Established in 2011, the annual event encourages people to wear their moccasins and share photos of them on social media with the hashtag #ROCKYOURMOCS to honour Indigenous peoples.

Educational assistant Amy Watson was one of several staff members at Sir Alexander Mackenzie Elementary who wore moccasins to mark the event, which this year coincided with Métis Week. She also made a pair of moccasins for Asiniwaciy the Bear, the school’s official Indigenous education mascot.

“It’s a symbol of my culture,” said Watson, who is Métis, of moccasins, and a way to connect with her students, many of whom told her that they had their own pairs of moccasins at home.

Joshua Morin of Michif Cultural Connections was also sporting some Métis moccasins this week and was part of an online Rock Your Mocs panel organized by Concordia University Thursday, Nov. 19.

Moccasins were for centuries the shoe of choice around St. Albert due in part to their versatility, Morin said. Residents back in the day needed something that was durable (as they couldn’t easily get materials to fix shoes in the middle of winter) yet practical, able to adapt to everything from minus 30 to plus 30. Small wonder, then, that the members of the St. Albert Mounted Riflemen (the community’s first military group) wore them.

Moccasins keep dirt, bugs and snow off your feet, and could be adapted to different conditions with the additions of grips, insulation or cushioning, Morin said. They are also great baby shoes, as they are often made from soft material such as sheepskin and would stretch to fit a growing foot.

"I was always taught that the moccasin is one way we tread lightly on Mother Earth,” Morin said, as they don’t dig into the ground like hard-soled shoes do.

Moccasins reflect the traditions of where they were made, members of Thursday’s panel said. Inuk artist and panelist Hannah Tooktoo Koneakl explained how the Inuit moccasins were often made from sealskin, and did not feature much in the way of beadwork up until a few generations ago. Women’s moccasins often featured horizontal patterns on the shins, while ones for men had patterns that ran vertically.

Métis moccasins are famous for their elaborate and often flower-centric beadwork, which earned the Métis the nickname of “the flower-beadwork people,” Morin said. Around St. Albert, moccasins tend to be slipper-like with lots of floral patterns, embroidery, and reds, blues and blacks. Moccasins from up north around Fort Chipewyan usually have thicker leather and more fur, and often sport solid white beaded backgrounds behind their patterns.

Moccasins are super comfortable as they are typically custom-made for your feet, Watson said. Hand-made ones often have personal touches; the ones she made for her son were covered with paw prints to reflect his love of wolves, for example.

Anyone can wear or make moccasins, but it’s important to respect and support the artists and peoples behind them, members of Thursday’s panel said. If you want to learn, Elder Joyce Beaver holds regular moccasin-making classes at Michif Cultural Connections, Morin noted.

Rocking your mocs was about showing pride in your heritage and reconnecting with your ancestors, Morin said.

“It’s rocking who we are as Indigenous people.”

Visit rockyourmocs.org for more on the Rock Your Mocs campaign.