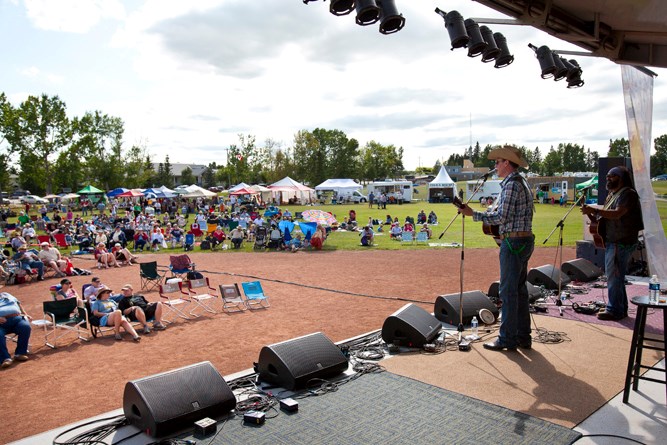 A vibrant three days of art and music continued an annual Carstairs tradition.

The festival offered a full slate of performances including headliner Charlie Major.

Major, a noted Canadian country music veteran, played the stage with Valleau's versatile band, the Polyjesters. Initially, Major and the Polyjesters were supposed to play one song together, but they joined forces for nine. This after only a short rehearsal in a trailer backstage.

“It was another great collaboration,” Valleau said.

“It was another friend made in the industry, another future possible project.

“I'm very proud of the Polyjesters, they always step up and play whatever you throw at each other.”

Earlier that weekend, the Polyjesters teamed up with the character-filled Blues musician Frank Schapp. Schapp, a New York resident, met Jason Valleau and Sheldon Valleau in France 10 years ago. A long-standing friendship that resulted in a collaborative album. Last weekend's MVMF performance was Schapp's fourth.

“It's the kind of festival, not putting down Calgary Folk or any of those big festivals, this one still stays real grassroots.

“They also allow people that are maybe not ready for mainstage stuff like – they let younger kids come in and do some playing. It's real grassroots that way.”

On teaming up with the Polyjesters this weekend, Schaap said it came with ease.

“They can sing a menu,” Schaap said of the colourful band's chameleon ability.

“They can play with anybody.”

With blues, folk and country, the festival was a mixed bag of easy-listening genres.

This included the musical showcase being kicked off with high-energy reggae band Souljah Fyah. The Edmonton-based group closed last year's show and was eager to be the 2011 opening act.

“It was super fun,” said Janaya Ellis, the group's lead vocalist, who helped bring people out of their seats.

“Everyone was willing to oblige our request to dance.

“I feel like if we haven't (made people dance) we haven't had our show.”

The hip, all-female quartet Magnolia Buckskin, played sets at both the mainstage at Memorial Park and the cosier Roulston Museum.

Natasha Platt, a vocalist with Buckskin, grew up on a farm just west of Carstairs.

Platt sees the value in what the music fest brings to the area.

“I love them for doing this,” Platt said of the Valleau brothers' creative project, during an interview in the band's trailer.

“It does so much for the town. All the young people here who want to do something creative, it gives them that inspiration.

“They're having a lot of young people come up, which is so important coming up, having that stage time.”

“I really enjoy the Polyjesters and the work that they're trying to do out in Carstairs in trying to make a name for this area, not even just the town,” Triggs said.

“I love coming out here and knowing that I'm contributing to that. It's genuine. It's a true festival. There's no arrogance about it. It hasn't gotten too big.”

Triggs was raised and honed her craft in Hemmingford, Quebec.

“It's good to support small-town culture,” Triggs said. “What they do here is what I dream of doing in my hometown.”

In addition to music, art was brought to the festival through its artisan market.

“It's nice that they have it set up where we can all see it and enjoy it,” Dowland said. “Especially for me where I can hoop to all the music.”

Dowland said being part of the artisan market was a positive experience.

“When the band stops and everyone moves around then you're sort of bombarded for a little while,” Dowland said.

“It's been really good. Everyone else has been so good about watching your tent if you want to get some food or need to go somewhere. It's been a really great day so far and last night was awesome too.”

The success of a weekend that brings droves to town couldn't be accomplished with an army of helping hands.

Valleau credited his team of volunteers for being difference-makers.

“The volunteers have stepped up way above and beyond their call of duty,” he said.

Valleau said those involved in arts funding through the province attended the event.

“They were very surprised by how big it's getting,” Valleau said.

For more information on the fest, visit mvmf.ca