While Didsbury resident Kelly Tschritter is from a musical family, she only started getting passionate about music in her mid 20s. “My parents were both musicians. Growing up, they were both professionals for 20 years.
Nov 22, 2011 12:00 AM By: Mountain View Today Staff 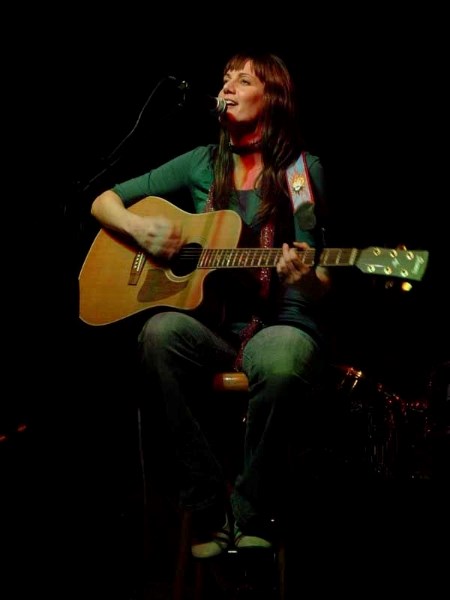 Kelly Tschritter enjoys putting her own spin to popular songs during her show. She plays Tracks on Dec. 17.

While Didsbury resident Kelly Tschritter is from a musical family, she only started getting passionate about music in her mid 20s.

“My parents were both musicians. Growing up, they were both professionals for 20 years. It was sort of their thing,” she said.

“I was not really into it. We sang at home for fun but it never was something that I even considered pursuing as a job.”

While teaching in Beijing in the early 2000s a friend convinced her to go to an open mike night at a students' pub near Peking University.

“I started playing and the host of the open mike session really sort of pushed me, saying that he really liked my music and asking if I wrote songs,” said Tschritter.

“I played some of my songs. That was what got me really playing music more.”

She had started composing songs after being asked by former Olds resident Alex Galanis to provide original music for his film project.

“That was a neat little push,” said Tschritter.

During her first year in China, she did music for fun, doing a few shows here and there and playing at exhibitions. During her second year, a show business agent paired her with a Liberian band, consisting of couple Marion and Emanuel Uechuwe, to play a regular gig at a five-star hotel. During that time, Emanuel Uechuwe rose to fame, thanks to an appearance on CCTV New Year's Gala, which is watched by more than 700 million people.

Tschritter ended up singing backup vocals on Uechuwe's first album and on many of his TV appearances.

“It was an opportunity to work with the best producers in the country,” she said.

“It was such a neat experience for me, being that I had just started.”

After being promised a backup singer job on Uechuwe's first tour, Tschritter came back to Canada for a short period before going to Germany to visit her father. Her father quickly convinced her to stay with him for a while and to experience the busker's life in Europe.

“I had never been to Europe. It was a great opportunity,” she said.

“I could busk and do the true singer/songwriter's dream of travelling around by train.”

While preparing for a show with her father and brother, Tschritter met future husband Tobias Kalden, whom her father had engaged as a sound engineer. The couple remained in Germany for a few years, before moving to Didsbury in July 2010.

Since moving here, Tschritter has played a lot of shows in local bars and festivals. Her Dec. 17 show at Tracks will be her third time performing there.

While she intends to play music from her 2008 debut EP and songs that she has yet to record, Tschritter will also play covers.

“A lot of the time, I will be starting a cover song and people do not know what it is. You see the people's heads kind of tilt and they know the song, but they cannot figure out what it is,” she said.

“I really enjoy doing that. That is the fun thing about being a singer/songwriter.”

While her music style is often described as indie folk, she often wanders into the arenas of jazz, country, rock, and contemporary.

Her plans for 2012 include recording a full-length album.