The penny war is on

Olds Municipal Library has declared war on the Didsbury Municipal Library. The two libraries will compete to see which one can raise the most pennies before Labour Day weekend.
May 22, 2012 1:00 AM By: Mountain View Today Staff 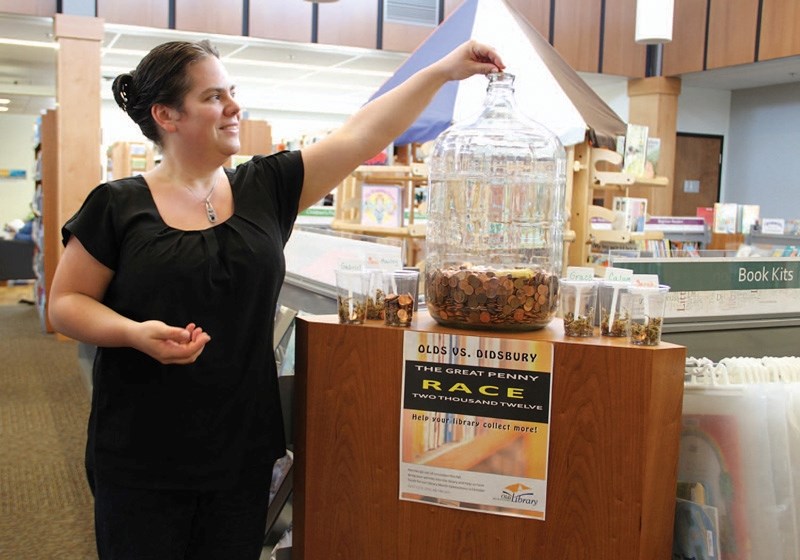 Olds library manager Lesley Winfield drops pennies into the carboy at the library.

The two libraries will compete to see which one can raise the most pennies before Labour Day weekend.

“At the end, we don't get anything for being the winner except for being the prestigious town that can support their library the most, I guess.”

The money raised will be used to help Olds Municipal Library pay for activities during Library Month in October.

“We have an author coming in during that month, as well as a bunch of other activities for the community,” said Winfield.

The penny war started four weeks ago, and will continue until Labour Day weekend. The pennies are deposited in a large, clear wine carboy.

“I would say we have a quarter of one filled,” said Winfield.

“It's hard to guess how much we will be able to get, but I guess the big thing is you won't even be able to spend your pennies after this fall. You might as well donate them to the library and let us spend them for you.”

The library is also planning other activities around the penny theme. For example, children involved in the story hour program have started penny trees.

“They bring in pennies each time they come to class to feed their little tree and help it grow,” said Winfield.

The library will also host a penny carnival later this summer for mothers and their kids.

“We will be having a penny carnival with the kids that day, and then we will have a bunch of vendors from around town,” said Winfield.

“The mothers will have a chance to pamper themselves and look at the things maybe they have been dreaming about and haven't had the chance to get for themselves.”

Should people want to keep tabs on how the wine carboy is filling, it is in the Olds Municipal Library main area.