The HUBCAPS determined to just play on 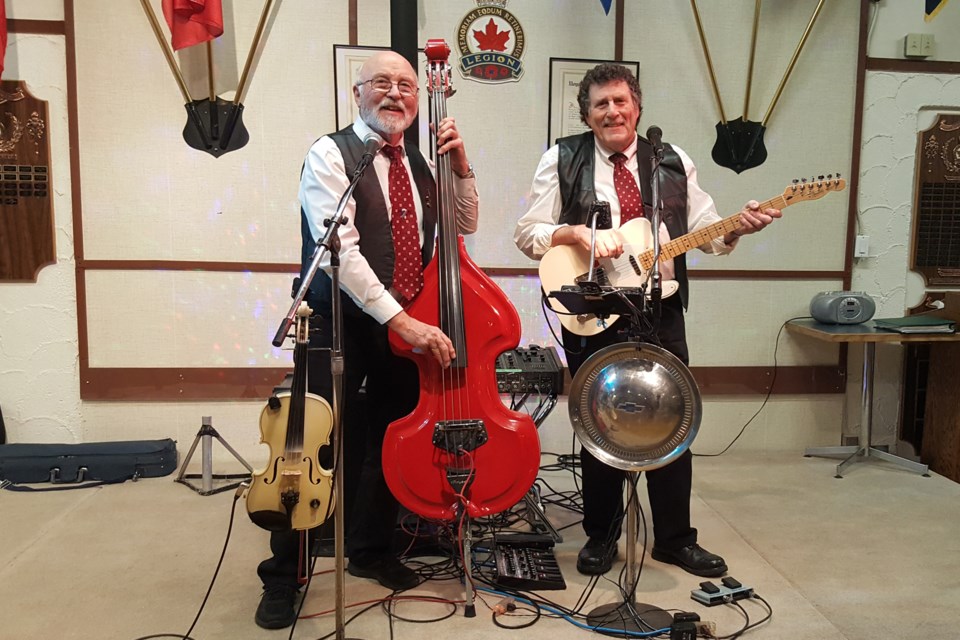 The HUBCAPS, Murray Cameron at left with Brock Smith, get ready to perform earlier in February at the Royal Canadian Legion in Calgary. They were scheduled to perform Feb. 21 in Innisfail. Submitted photo

INNISFAIL – They’ve known each other since their elementary school days in Calgary and 54 years later Murray Cameron and Brock Smith are still pals and partners.

They are partners in their two-man band The HUBCAPS. They have been playing music together for as long as they can remember, and over the past half century it has been their lives.

“We started in high school in Calgary in 1966 playing kind of a folky thing for the pep rallies at Crescent Heights High School. We lived on the same street since we were about five years old and knew each other,” said Cameron, who has been an Innisfail resident for the past nine years. Smith currently resides in Cochrane.

“We are retired now and we do things like this, like the legions, which are local and fun and we know the people. We do a lot of seniors’ lodges too. We have the material for that age group.”

Cameron, 75, and Smith, 73, brought their talents as The HUBCAPS to the Innisfail Royal Canadian Legion on Feb. 21.

The pair have travelled all around the world and criss-crossed Canada countless time together as The HUBCAPS, as well as for STRATUS and the show band STRATUSFACTION. For decades they did as many as 200 one-nighters a year, and along the way rubbed shoulders with Neil Diamond,  B.J. Thomas, Rich Little, Roy Rogers, the Rankins and many more.

Outside The HUBCAPS Smith’s wife Merry Jo is their singer, who they met in Lethbridge in 1966. The trio still does concert shows today when they hit the stage as STRATUS.

For The HUBCAPS Cameron plays the bass and fiddle while Smith plays guitar. Describing themselves as a cross between the Everly Brothers, the Righteous Brothers and the Smothers Brothers, the pair will perform a nostalgic selection of classic rock and pop from the '50s and '60s, along with some country, comedy, audience interaction and on-stage banter. There will even be some fiddle tunes.

Cameron emphasized the Innisfail show will feature lots of dance music, including several tunes for the schottische and polkas.

The era of 200 one-nighter shows a year has now passed for the pair but they still manage 30, but only in Alberta. The spark is still there for these veteran musicians to play on.

“We love it. It’s a hobby with pay. It keeps our minds alive. We are always learning new material. People come up to us and ask us for new material,” said Cameron, recalling a past show at the Innisfail legion when a waitress proposed they play her favourite song.

“She said Just a Gigolo,” said Cameron. “We said fine and the next night we had it in the show and we did it for her and it blew her away.

“We’ve been doing it ever since,” he added. “We learn things pretty quick. We’ve been at it for a long time.”

Fabulous and talented cast takes the stage
Feb 22, 2020 6:20 AM
Comments
We welcome your feedback and encourage you to share your thoughts. We ask that you be respectful of others and their points of view, refrain from personal attacks and stay on topic. To learn about our commenting policies and how we moderate, please read our Community Guidelines.