Rockin’ the Rink attendance up over last year 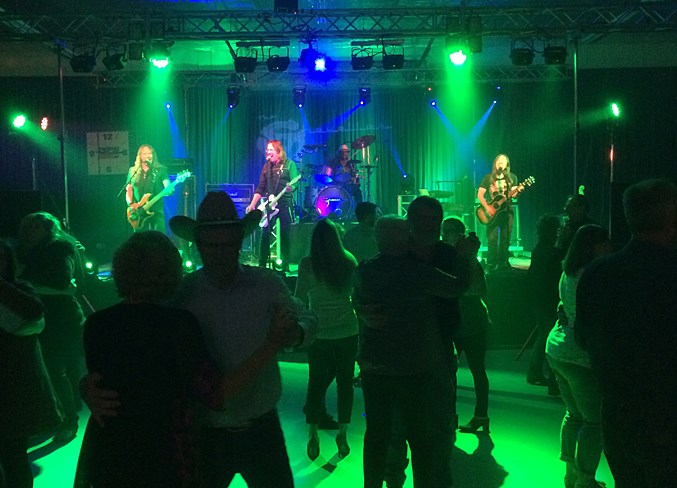 Attendance at the eighth annual Rockin’ the Rink on Saturday, Oct. 5, which featured a return appearance from The Chevelles, was up over last year and the dance floor at the Sundre Curling Club was packed all night after dinner, said event organizer Kevin Humphrey.

The dance floor was full all night with attendance up slightly from last year’s Rockin’ the Rink.

“It was a good crowd,” said Kevin Humphrey, event organizer and past president of the Sundre Curling Club, adding this year’s turnout of a little more than 260 was a modest jump up from 240 last year.

“We had a lot of new people come out this year,” said Humphrey, adding a number of regulars also attended.

The Chevelles returned on Saturday, Oct. 5 to provide a live rock n’ roll performance at the Sundre Curling Club for the eighth annual fundraising event.

“The food was excellent and so was the music,” said Humphrey, adding people packed the dance floor after the dinner and that he heard some positive feedback about the food and the band.

“It turned out better than I thought it would,” he said, grateful that the annual event continues to draw out a decent crowd.

Although the total amount raised had not yet been completely calculated when Humphrey spoke with the Round Up late last week, he estimated about $10,000 was generated, which is roughly on par with the average year, to support the club’s general operations.

Humphrey, who is now looking forward to the start of the curling season, expressed gratitude not only to all of the sponsors and volunteers who made the event possible, but also to everybody who came out to support the curling club.

“That’s a huge boost,” he said about the helping hands who contributed, including the curling club members who once again excelled on preparing an enjoyable meal.

“They did a really great job. If we didn’t have the volunteers, it wouldn’t be feasible at all.”

The regular curling season starts next month, with the Sturling Season Opener Fun Spiel taking place on Nov. 16. Visit www.sundrecurling.com for more information about the organization and upcoming events.