Nu2U looking for help to get old machine working

Nu2U thrift store manager Barb Adair is hoping somebody out there can help her and her staff solve a problem.
0
Sep 17, 2019 10:10 AM By: Doug Collie 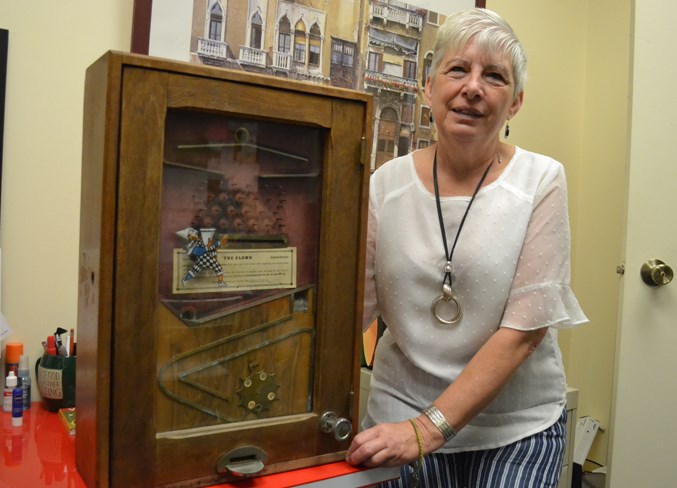 Nu2U thrift store manager Barb Adair displays a coin-operated machine she and the staff would like to get working. They&#8217;ve come to the conclusion it needs German marks to operate, but they don&#8217;t have any. They&#8217;re hoping someone out there does.

Nu2U thrift store manager Barb Adair is hoping somebody out there can help her and her staff solve a problem.

Two or three months ago someone mysteriously dropped off an old coin-operated game: Le Clown Bajazzo -- Bajazzo The Clown at the store and they'd love to get it working.

The machine is made of metal and wood. It's about two and a half feet tall and less than a foot and a half wide.

Via research on the internet, Adair has discovered that the machines were made by Jentzsch & Meerz, dating back to 1906. She says a similar machine sold for about US$1,200.

You insert a coin and manoeuvre the clown so a ball falls onto a conveyor and into a little hole.

"If you manage this, a coin falls into the tray underneath and you get a drink from the bartender with that coin," Adair says.

"You can imagine this sitting on a counter in a restaurant, sort of like our jukeboxes used to," Adair says. "So it would be an entertainment game."

But there's just one problem. Adair and her staff have discovered the game won't work without the right kind of coins. They've tried Canadian coins, euros and francs. Nothing has worked.

They suspect it requires German marks to work, but none of the staff have any. So Adair is hoping somebody elsewhere might have some — maybe a a coin collector.

Neither Adair nor her staff ever saw the person who dropped the machine off.

"On the outside of the box it said 'lot number such and such.' So we think it may have at one time come from an auction. Somebody bought it at an auction."

"This has been a big mystery for the staff," she adds. "We'd all like to get it operating. That would be a big feat for us."