Nostalgic '50s radio show remake The Louisiana Hayride Live Radio Show is once again bringing its story and song to the residents of Olds, returning this Friday (Oct.
Oct 11, 2011 1:00 AM By: Mountain View Today Staff 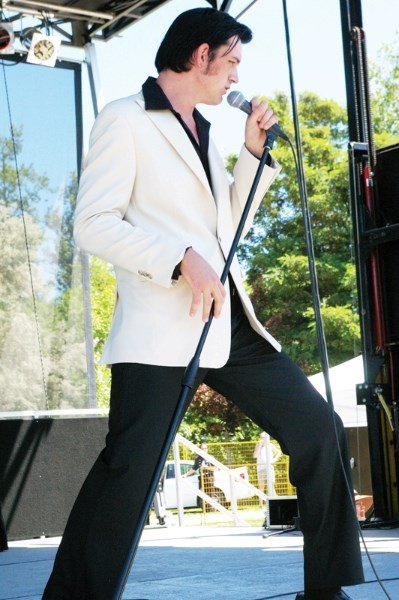 The cast of the Lousiana Hay Ride Live Radio Show has recently added Adam Fitzpatrick, otherwise known as young Elvis, to their cast, rounding out it&#8217;s already star-studded cast of impersonators. The group is bringing its riotous musical talent to the TransCanada Theatre in a nostalgic fashion this Friday evening at 7:30 p.m.

Nostalgic '50s radio show remake The Louisiana Hayride Live Radio Show is once again bringing its story and song to the residents of Olds, returning this Friday (Oct. 14) to the TransCanada Theatre in the CLC's Fine Arts and Multi Media Centre at 7:30 p.m.

The Louisiana Hayride was a live radio show, broadcast over KWKH Radio in Shreveport, Louisiana, which had a successful 12-year run from 1948 to 1960, explains Gil Risling, the show's Roy Orbison, guitarist, vocalist, and bassist.

“The Hayride was instrumental in establishing the careers of such artists as Hank Williams, Elvis Presley and Johnny Cash and because of that, earned the nickname ‘The Cradle of the Stars,'” said Risling.

The show is a look back in time through a window at events from these characters' lives, he said.

The Okanagan and Shuswap, B.C.-area band is comprised of Patrick Riley as Hank Williams, Andrea Anderson as Patsy Cline, and Adam Fitzpatrick as Young Elvis.

Olds will mark the 34th show that the travelling troupe of tributary troubadours has played since they began touring a mere 18 months ago, after a successful series in the Okanagan, their home base.

Some of the many things audiences will be treated to include a look at Hank Williams' early years, Elvis's frustration at being a rejected 19-year-old singer, and why Roy Orbison wore dark sunglasses.

The show's newest addition to the radio program is the young Elvis character, which Risling said has quickly become a fan-favourite and sure-fit with the current cast.

“There's been a very good response – no matter where we've went.”

Although Risling said he can do an uncanny vocal impersonation of Elvis, “I'm an older guy, so it doesn't work,” he said with a chuckle.

“This guy, he's got the look. He's got everything going on for him.”

Fitzpatrick, the 27-year-old who plays Elvis, first encountered Elvis Tribute Artists at the Pacific Northwest Elvis Festival in Penticton, B.C., and quickly grew from a spectator who loved Elvis's music to an amateur tribute artist.

He entered the amateur division of the festival against 14 other artists on a dare in 2008 – and won.

Fitzpatrick covers all three eras of Elvis's musical career, including the “high-energy moves of the '50s,” the “raspy vocals of the '68 comeback special” and the “powerful vocals of Elvis's Vegas years,” complete with authentic costume changes appropriate to each era, Risling said.

“No one can ever be Elvis, he was and still is unique,” said Risling. “Adam's goal in his shows is to give his audience – as much as possible – what they might experience from attending a real Elvis concert.”

Keeping a bygone era of music alive is something Risling said he and the group of multi-talented actors, musicians, singers, and writers are proud to do.

“It's pretty incredible. And the response from people is overwhelming. Overwhelming and humbling.”

The group's members have multiple stories of emotional audience members approaching them after the show to tell them how much they appreciate and connect with the music and performances, said Risling.

“An (older) lady came up and she had tears in her eyes, and she said that she'd bought her first Jim Reeves record with her babysitting money,” he said.

Other younger audience members have had powerful memories of a parent who has passed come to mind after hearing the group's songs, he said.

“Nobody's filling that niche right now – the baby boomers are kind of being ignored by mainstream media and marketing.

“The crew wants to do it forever,” said Risling with a chuckle. “We've got a 10-year goal in mind. Lori has already written show three, and we're starting to work on that.”

The Louisiana Hayride Live Radio Show is setting its sights on the Stampede for 2012, and is currently in discussions with officials to make it happen.

The impact of the group is widespread, but one stands out to Risling.

“We had one couple come up to us at the Creekside Theatre in Winfield, B.C., and the lady said, ‘We have been to Nashville three times, and we have been to Branson four times,' and she said, ‘This is better.'

“I'm not sure what she meant for sure, 'cause those guys are pretty damn good,” said Risling.

“I think what she maybe meant was the Louisiana Hayride is fast moving. There are stories being told. It's entertaining and exciting.”

The proven popularity of the program is in ticket sales, which Risling said are going excellently – three-quarters of the tickets for upcoming shows are already sold, he said.