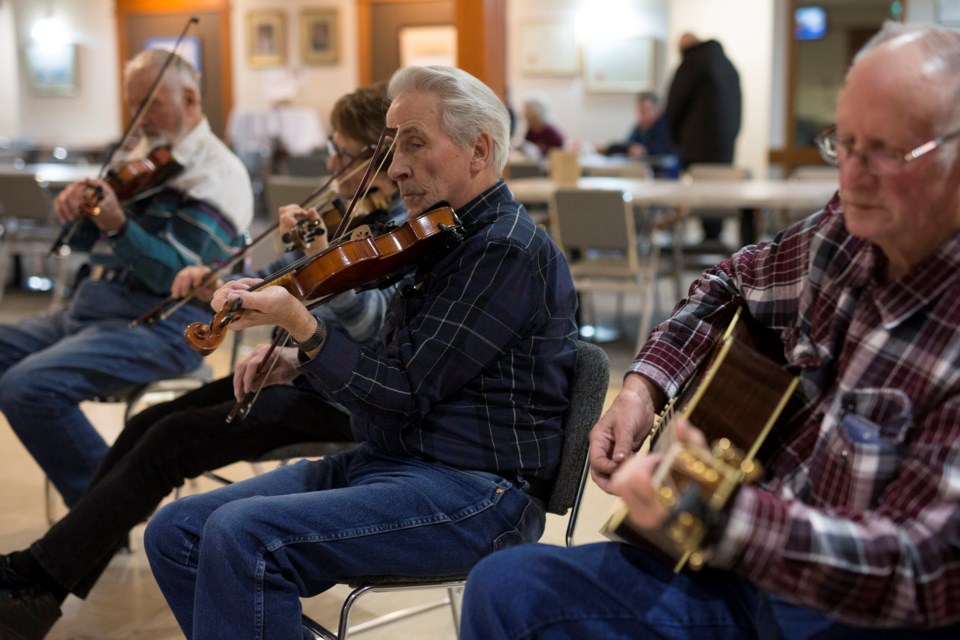 OLDS — The Foothills Centennial Fiddlers will be holding a free concert tomorrow to celebrate their 15th anniversary.

The Jan. 24 event will be held at 1 p.m. at the Olds Royal Canadian Legion Branch 105. Attendees are welcome to attend a lunch beforehand.

The group was formed back in 2005 by Anne and Earle Bowes as well as George and Veronica Muza.

Since then, it’s grown to about 15 members, including two guitar players and a couple of bass players. Some of the original members are still active today.

The Centennial Fiddlers play concerts in hospitals, lodges and at other events like Canada Day celebrations from as far north as Lacombe, south to Airdrie, as far west as Sundre and as far east as Delburne.

Originally, they met at the Muzas' home, but when the group got larger, they began holding their rehearsals at the legion in Olds. It still serves as their rehearsal space.

Murray Cameron of Innisfail, a spokesman for the group, is hopeful it will last for another 15 years.

They’re always looking for new members, but Cameron concedes that may not be easy for some.

“The trouble is, you’ve got to basically be retired, because mostly what we do is we have rehearsals Wednesday afternoon at the legion,” he says.

“If you’ve got a job or something, or you’re not usually available and the lodges that we play in, most of the time they’re during the day.”

Cameron says the group performs about 25 concerts and about 20 rehearsals a year.

“It’s a great social thing for us all. It’s really quite fun. The group is getting to be quite good and you know we get callbacks everywhere we go.”

Cameron says some facilities book them frequently. For example, a lodge in Crossfield books them to play every two months for a year at a time.

He describes the music they play as “old-time fiddle music; the Don Messer-style waltzes and chartreuses and the jives and the two-step; that kind of thing.”

They also play some East Coast fiddle music as well as country standards made famous by groups like Bob Wills and the Texas Playboys.

“We even do a couple of Second World War songs because a lot of the people that are in these places that we play, they are as old as we are or older, so that’s who we’ve been catering to,” Cameron says, although he adds that many young people seem to like the music too.

CKUA spring fundraiser surpasses goal
Apr 29, 2020 8:15 AM
Comments
We welcome your feedback and encourage you to share your thoughts. We ask that you be respectful of others and their points of view, refrain from personal attacks and stay on topic. To learn about our commenting policies and how we moderate, please read our Community Guidelines.