Olds High School graduates Tyler MacIntyre and John Negropontes made a splash at the Edmonton International Film Festival last September, when they announced they wanted to bring convicted murderer Mark Twitchell's story to the big screen.
Dec 20, 2011 12:00 AM By: Mountain View Today Staff 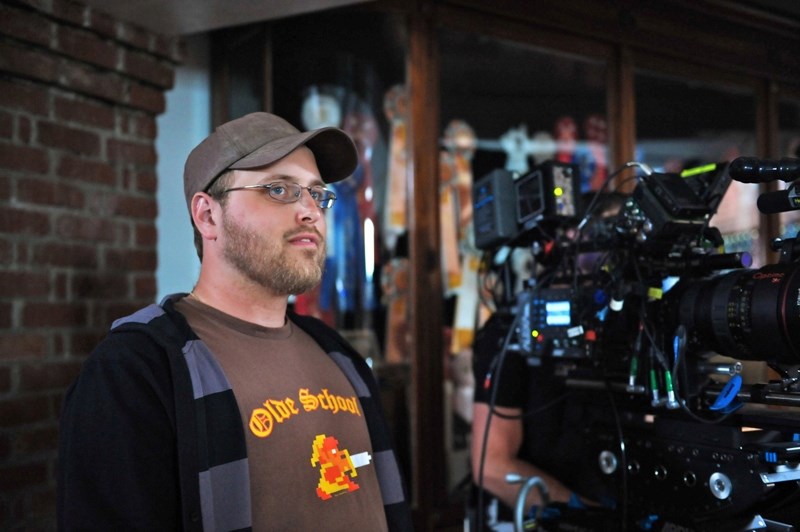 John Negropontes worked as a unit production manger for the 2012 horror movie Sighting.

Olds High School graduates Tyler MacIntyre and John Negropontes made a splash at the Edmonton International Film Festival last September, when they announced they wanted to bring convicted murderer Mark Twitchell's story to the big screen.

Twitchell, an Edmonton filmmaker, was convicted last April of the first-degree murder of Johnny Altinger. In October 2008, Altinger was killed after being lured to an Edmonton garage, expecting to meet a woman he had contacted on a dating website. The trial attracted a lot of media attention, due to the fact that Twitchell was inspired by the American TV series Dexter, which features a serial killer protagonist.

The two friends and associates, who studied together at the University of Alberta and the American Film Institute (AFI), became interested by the Twitchell affair right at the beginning.

“It was a pretty public trial, as things went and by American standards. A lot of documents were released in pdf format. You could, if you wanted to, do a fair amount of thorough research on your own, because you could have direct access to the interrogation materials and various witness reports and things like that,” said MacIntyre.

He thought it could be a good topic for a film and started getting in touch with people that had been involved in the case.

MacIntyre and Negropontes were attracted to the Twitchell story, due to the fact that they have similar backgrounds with the jailed murderer.

“We grew up in Alberta. I certainly identified with this character, it is kind of weird to say that,” said MacIntyre.

“Coming from a low-budget filmmaking background, and being a person that wanted to pursue something that was not really available to us, I kind of understood where that character was coming from in some ways. Obviously, it led to a much darker pursuit in his case.”

It also gave the filmmakers the occasion to work on a true story.

“The crime is ultimately a bizarre true crime. I have always been interested in that genre,” said MacIntyre.

“I have never done anything that was based on like a real-life person. I really want to try something in the true-crime genre.”

While Negropontes and MacIntyre had hoped to shoot the movie this winter, Twitchell's appeal has thrown a wrench in their plans.

“It is a project that will be for two years in the future,” said MacIntyre.

“For legal reasons, we were advised to wait until the appeal has gone through to make sure that everything is sound.”

While Twitchell was planning his murder in 2008, MacIntyre and Negropontes moved to Los Angeles to study at the AFI, ultimately getting their master's degrees in fine arts.

“The nice thing about an MFA from the AFI is that it is very hands-on. You learn a lot about the intricacies of production,” said John Negropontes.

“The AFI program is fantastic. There is a lot to keep you busy. You don't have time to be bored because you are just going all the time for two and a half years. Then you get out, thinking it is time to start working but the work is so much easier than at school.”

The two friends have been making movies together since their high school years.

“It was an interest that we had had since middle school. From then on, we started getting more serious about it,” said Negropontes.

“We stopped acting in our movies and got people that were in drama and showed a proficiency or talent. We started getting more professional.”

In 2005, while they were studying at the University of Alberta, they obtained a government grant to make their first feature film, a Western titled Whiskey Jacks.

“We learned a lot and had a blast. We took 10 or 15 people down to Southern Alberta and shot on locations that had been booked for big Hollywood movies,” said Negropontes.

“It was at that point that I actually thought that I could do this for a career.”

Since graduating from the AFI, both MacIntyre and Negropontes have been really busy, working on TV and movie projects.

While MacIntyre is a writer and a director, he works on the side as a film editor or a writer. Negropontes, who aims to become a movie producer, works as a production manager and a line producer.

During their Christmas break, they intend to shoot a short film in Edmonton.

“It is a short film about two kids on hockey night. I don't think we have done a hockey movie yet,” said Negropontes.

In the future, they both hope to come back to live full-time in Alberta and make films here.