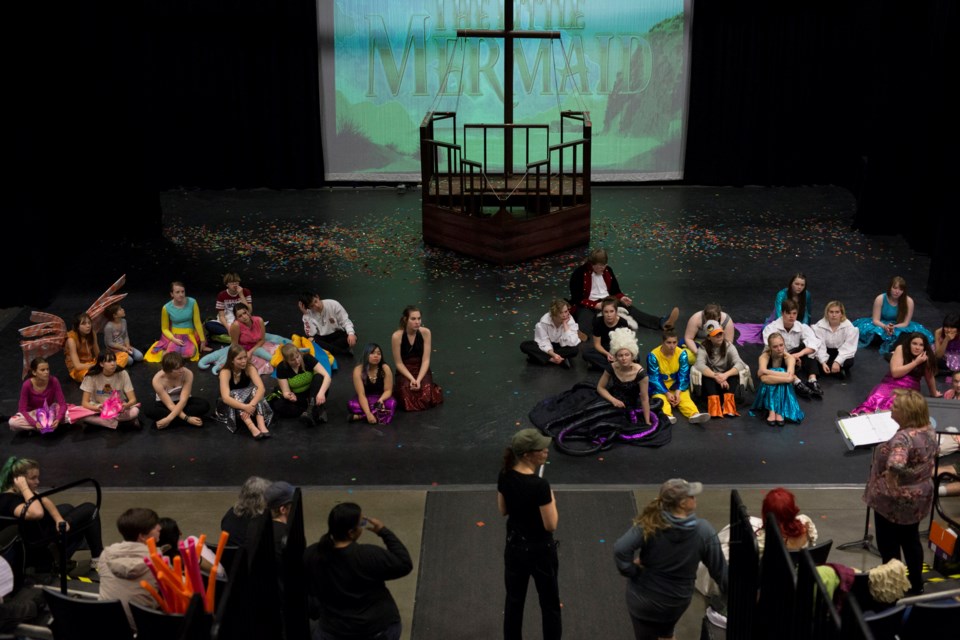 Ecole Olds High School students participate in a rehearsal for the drama club's upcoming performances of The Little Mermaid at the TransCanada Theatre. Noel West/MVP Staff

OLDS — Members of the École Olds High School (ÉOHS) drama club are just a day away from opening night of their latest presentation, The Little Mermaid.

Tickets are $20 for adults and $10 for students and children. Tickets are available at the ÉOHS office, by phoning 403-556-3391 or online at www.kiwanisconcerts.ca.

Three cast members, Bella Cranston who plays Ursula; Tierney Craven who plays Aquada and a princess; and Anja Kelly, one of two people playing Ariel, agreed to be interviewed.

In total, there are 38 cast members and five stagehands. Drama teacher Rhonda West says that is among the largest groups she’s ever worked with.

Kelly recounted the play in a nutshell.

“She’s a mermaid and she’s had this sort of confined life where she’s forced to live a life she doesn’t want to live, which is under the sea. Where she wants to be is on land,” she said.

“So the story is basically her journey to becoming her own person and also falling in love – in the most broad terms.”

Costuming was one of the biggest challenges the play presented “because making mermaids on stage isn’t always the easiest,” Cranston said, sparking  laughter.

She said that problem was solved by creating mermaid costumes that are essentially long dresses that flare out at the bottom.

It’s more so giving the illusion of that, rather than having actual physical tails,” Craven added.

“I think the other challenge of this one is because it’s such an iconic show that everyone knows, it’s just being able to do it justice to a point where people, when they come and see it, are going to be satisfied with what they’re seeing, based on (what they’ve seen before),” Kelly said.

“To fulfil their nostalgia,” she said. “But the costumes are very bright and very colourful and they’re going to be very pretty to look at, very exciting.”

The group is looking forward to sharing the play with an audience.

“This show especially, it presents itself as just being big. Just a very big show and everything in this show is over the top because it’s Disney,” Kelly said.

“Everything is just kind of to the extreme. So there’s never really a dull moment in this show. Every scene and every moment is fun and upbeat. Like, it’s good and big and fun in its own way.”

The group began working on The Little Mermaid last June. They read the scripts over the summer and began rehearsals this fall.

Although some sets were built for this show, much of the background will be projected on a screen at the back of the stage.

“We still do have a lot of set pieces, but yeah, using projections has kind of helped us a lot in not having to build as big, grandiose kind of sets,” Kelly said.

Cranston added they have built a couple of really big set pieces – and that’s been a challenge.

“We haven’t been able to use them a whole lot because they’re so big, we’re just trying to get them into the theatre,” she said, sparking laughter.

Fabulous and talented cast takes the stage
Feb 22, 2020 6:20 AM
Comments
We welcome your feedback and encourage you to share your thoughts on this story. We ask that you be respectful of others and their points of view, refrain from personal attacks and stay on topic. To learn about our commenting policies and how we moderate, please read our Community Guidelines.