Discovering the wonder of DAWN in Newfoundland

INNISFAIL - There was no kissing the cod for nine girl guides of the 1st Innisfail Pathfinder Unit but their 14-day journey to Newfoundland will never be forgotten.
0
Sep 26, 2019 9:45 AM By: Johnnie Bachusky 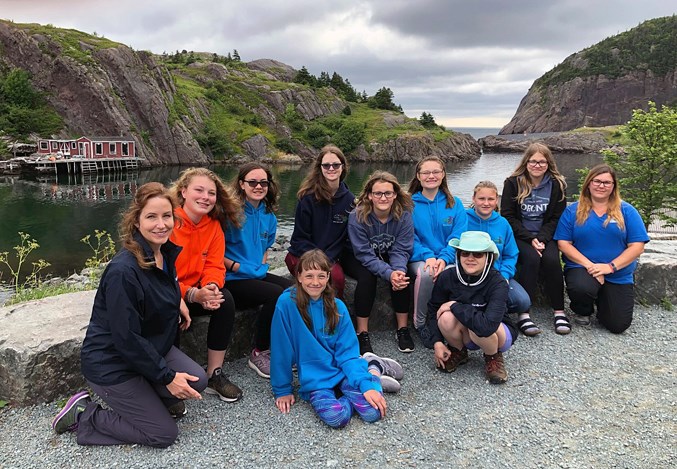 The full group of 11 local Girl Guides, including two leaders, seaside by the quaint village of Quidi Vidi during their recent journey to the DAWN camp in Newfoundland. In the back row from left to right is Michelle Mooney (leader), Haley Mooney, Faith Bukva-Malin, Alisse Wurz, Hannah Lind, Raechel Scott, Joey Matheson, Bella Trigg, and Amanda Stemmler (leader). In the front row is Amy Kinsella and Kate Shokeir.

INNISFAIL - There was no kissing the cod for nine girl guides of the 1st Innisfail Pathfinder Unit but their 14-day journey to Newfoundland will never be forgotten.

The lucky nine, all junior high school age from 13 to 15, participated in the Girl Guides of Canada-sanctioned DAWN outdoor camping program at Gros Morne National Park, located in northwest Newfoundland, from July 29 to Aug. 4. They joined 350 other girl guides from across Canada for DAWN, an acronym for Discover, Adventure, Wonder, Nature.

When it was over on Aug. 4 the young women, who were joined by two local adult leaders, took a 10-hour bus ride to St. John's for a week of exploration and sightseeing of the province's natural wonders and rich heritage.

Michelle Mooney, the unit's adult leader with Amanda Stemmler, said it was the first time East Coast girl guides created such a large camp, which was modelled on a similar one on the West Coast. DAWN, noted Mooney, ties "nicely" into the national program as the young guides were able to select activities from a variety of streams, including STEM (science, technology, engineering and math), community service, active living, arts and culture.

"The things the girls did at camp tied into their everyday programming we do at home, so they do get credit for what they did at camp," she said. "They chose their own activities, got their own schedule, including the skill of time management, getting to and from activities on time, and being prepared for the day.

"Girls at this age and who have gone through the guiding program end up with some great opportunities in developing their life and leadership skills," said Mooney. "We do a lot of volunteering and community service within our communities in a variety of different ways, such as collecting things for food banks, women's shelters, and helping out at the historical village, so the girls at this age can begin to develop skills  they can put on their resume and college applications."

The girls' daily DAWN camp schedule included a session in the morning, a break for lunch, and a session in the afternoon, followed by a supper break. Their sessions included a service project in the national park for trail repair and facility maintenance. There was opportunities for swimming, canoeing, sea kayaking, as well as craft creation with ceramics, photo frame making and scrapbooking. They also had a chance to zipline, play basketball and volleyball, try out a high and low rope course and go hiking. The girls also had an out-trip to the Bonne Bay aquarium and research station. For the DAWN arts and culture component there was Newfoundland and Irish dancing and throat singing. In the evening there was campfires, concerts or karaoke. The girls then headed off to bed in two large tents on a 30-foot by 30-foot site, which included a smaller tent for leaders and a kitchen/cooking area.

"It was such a fine, great experience. The entire trip was well organized, a really good experience. I am glad we were able to do it," said 14-year-old Haley Mooney, who had never before visited Newfoundland.

She had earlier experience that helped her and most of the other girls by attending the similar SOAR (Spirit of Adventure Rendezvous) program in 2017 at a camp in Smithers, B.C.

"We just learn many skills and learn about many different places and the different experiences people have gone through," said Haley. "We can take that and put it to our own lives and be sure not to make mistakes and use these certain skills later on in life."

Camp ended on Aug. 4 but there was still eight days to go before they had to go back to Alberta. The nine girl guides and their leaders headed to St. John's where they rented a house, relaxed and experienced the island's rich and unique culture, heritage and laid-back lifestyle. They took in three private tours, which included a boat ride to watch whales and seabirds. The girls were taken to Quidi Vidi village, home to a provincial historic site that served as a battery during the War of 1812. They had a chance to see Cape Spear lighthouse, the most easterly point of North America, and of course the historic Signal Hill.

"It was awesome. Everybody was just so relaxed and nonchalant," said Michelle of the endearing charm of the Newfoundlanders.

And of course not to be missed or ever forgotten was the obligatory stroll down Water Street, famed for its unique culture and cuisine.

"We enjoyed poking around and checking out the neat shops," she said. "We took the girls to some restaurants, lots of mussels, scallops and lobster but there was no kissing the cod."

But there was countless memories, enough to last each girl guide a lifetime.